Read this first. This morning, Saturday 21 September 2019, I met the Conservative candidate for Newmarket-Aurora, Lois Brown, for the very first time. The main take-away is that she has removed 8 unlawful election signs which were placed on regional roads in defiance of a York Regional Council By-law which states, unequivocally, that election signs on regional roads should not be put up before Monday 23 September 2019. So far as I am aware, the Liberals and NDP have obeyed the by-law to the letter. What happens next is a matter for York Regional Council and, quite possibly, the Courts. Now read on... 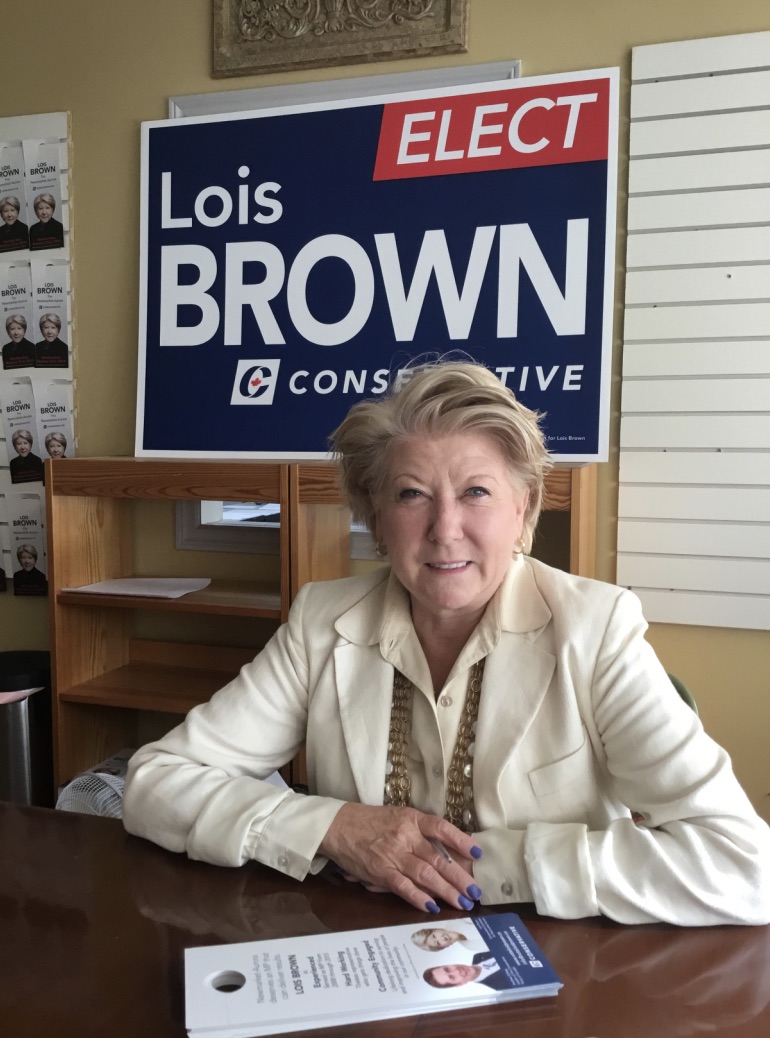 I’ve been given 20 minutes with the former MP for Newmarket-Aurora who wants to win her old riding back.

I hope we can hit it off.

Campaign manager, Peter Seemann, her chaperone, is on her right. It is 9.30am on Saturday morning.

I start by congratulating Lois on having such loyal staff. I tell her Matt Buist, the volunteer director, called me out of the blue to take issue with my description of her as “listless and invisible”.

We all laugh! Much amusement.

But I want to know why Lois, at 64, wants to return to the House of Commons. What was the highpoint of being an MP? And why do it again? I tell her that I must be one of the very few people in Newmarket-Aurora to have read every word she uttered in the Chamber of the House of Commons. I sound like the school swot.

Lois reels off her long list of achievements. He involvement in international development issues, maternal health, meeting the Pope and so on. She tells me she has three rosaries blessed by the Pontiff. She gives two away but treasures the third which she keeps. I ask if she is a Catholic. No.

Politicians who want to get back into the Commons usually explain it away by saying there’s unfinished business. And I guess that’s true of Lois Brown too. She obviously found being an MP very fulfilling.

Lois and her largesse

Now I turn to Newmarket-Aurora and she rattles off a long list of infrastructure projects where she was instrumental in getting the funding. She lists Riverwalk Commons and the Old Town Hall – but wonders why the cost of renovating the historic building came in at way over budget. I say it was the foundations. She says she got funding for the Town’s new maintenance facility and hesitates as she tries to remember what it is called. “Bob Shelton” I suggest.

Now Lois is on a roll telling me what’s she has done for the area.

Whoa! I say. I am getting the stump speech! I glance at my watch. Time is running out and Peter is counting down the minutes and seconds.

I want to talk about climate change. Lois is in favour of pipelines. She says it will take time to get away from fossil fuels. Technology will provide an answer in due course and she makes a glancing reference to solar panels.

I tell her I don’t want to put words into her mouth but is there a climate emergency? Yes or no?

That is not a word Lois would use but she concedes the climate is changing.

I now ask her about something she said in the House of Commons back in 2014 about tackling climate change. She said consumers should reduce consumption by one third - of food, of heating in the home and of transportation. I ask if this is remotely feasible in Canada with its freezing winters.

She says I am taking her remarks out of context and I move on.

No show at debate on Climate Change

I ask if she is going to the debate on climate change at the Old Town Hall this coming Thursday, organised by Drawdown. I think I’ve crossed a line. Peter, quick as a flash, butts in and says there is another event on so she won’t be there. Ahhh!

Now we are talking about Lois’ time on the Transport Committee and whether we can expect hi-speed rail in Canada anytime soon. She gets in a dig about Obama who talked about high speed rail hubs in Atlanta, New York and somewhere else but nothing materialised. She tells me she looked at bringing hi-speed rail to Canada but it would cost a fortune.

Now the clock is ticking down and I am beginning to panic. I’ve still got so much to say.

I open my Globe and Mail and spread it out on the table in front of us. The front page has a photo of a handgun with the headline: Off Target.

I ask if she is in favour of banning assault weapons, just like the Liberals. She says:

I point to the Globe and Mail:

“The number of gun deaths across Canada has skyrocketed. The Liberals have proposed a ban on assault-style rifles, but a year-long investigation shows that won’t solve the problem.”

I open the centre pages and point to the graphs showing the extent of the problem. I remind her the Globe and Mail is a conservative newspaper hoping that might make a difference. 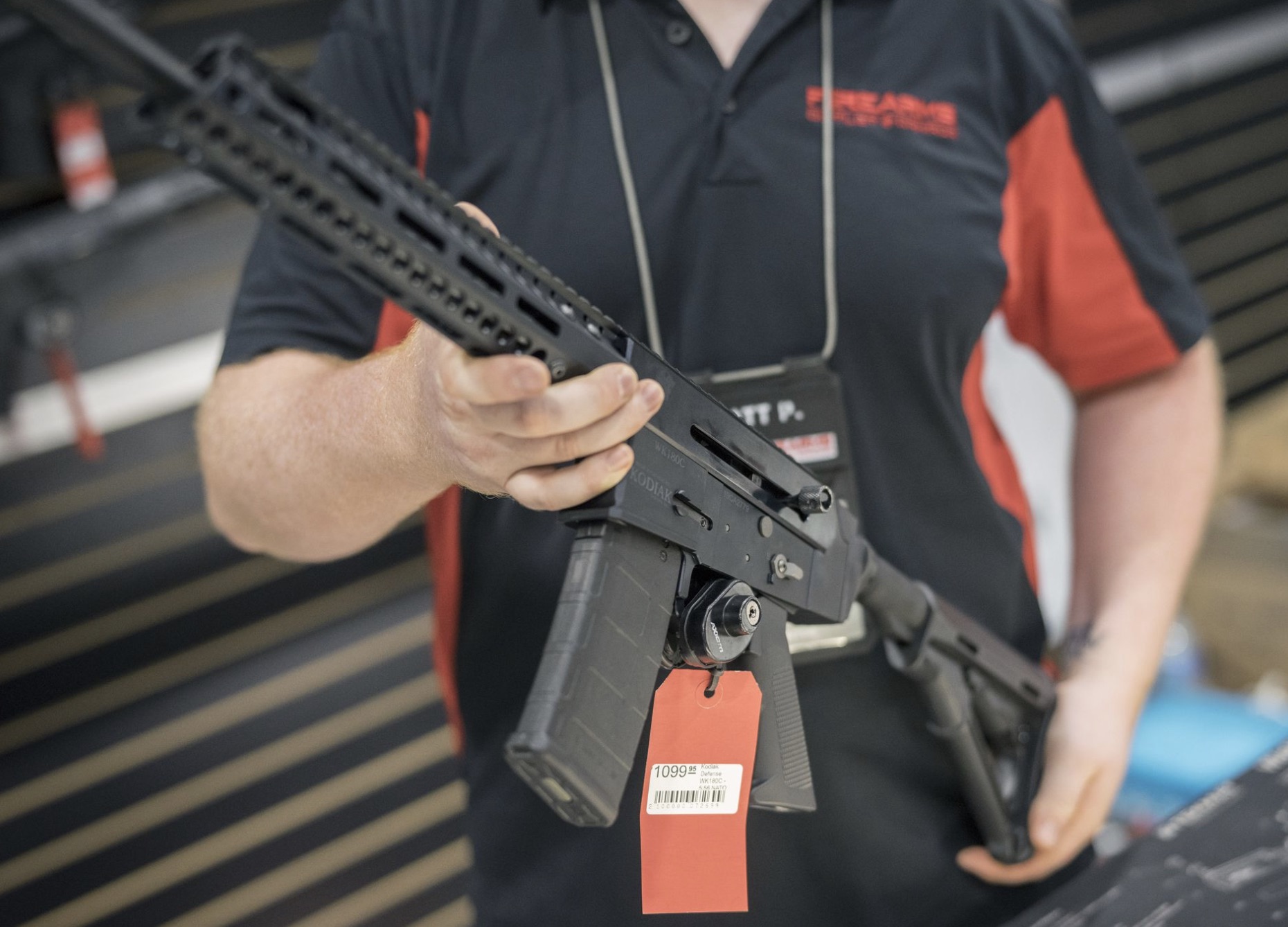 I am left wondering why Lois chooses to misunderstand the law on firearms. She is adamant I’ve got it wrong. I don’t want to split hairs. We are talking about semi-automatic weapons that can kill lots of people. (See note 2 below)

What about handguns? She is not in favour of a ban. The problem is not with legal handgun owners but with the others. It is the usual Conservative script. I am disappointed but not surprised.

I am almost out of time but I’ve gotta ask about the “ELECT Lois Brown” election signs, the issue of the moment.

Before Lois has a chance to open her mouth, her chaperone intervenes. I get a long explanation of what happened when. The phone calls. The emails. The detailed explanations of what happens elsewhere.

But what about the email from the Regional Clerk, Christopher Raynor, reading the Riot Act, which went to all candidates on Wednesday 18 September 2019? He said no signs should go up on regional roads until 10am on Monday 23 September.

The chaperone tells me eight signs have now been removed but the others stay where they are. He says no more signs have been placed on regional roads.

And that’s it. Just time to take a photo (top right).

Now we are saying our goodbyes. This is when the other person’s guard usually drops and I can sneak in a telling question. I suggest to Lois that Newmarket-Aurora, with its demographics and income, is really a Conservative riding. The Liberals won it in 2015 only on the promise of Sunny Ways.

No she says, it is a swing riding.

I tell her Newmarket-Aurora doesn’t appear on the CBC’s list of 60 ridings to watch. The look on her face suggests this is news to her.

Now she flashes a smile and says:

Phew! I am speechless.

I am tempted to ask:

"Can we meet again?"

But I am pretty sure she’d say no.

“Mr. Speaker, we are very proud of our record. We are a founding member of the Climate and Clean Air Coalition, which is focused on taking immediate action to address climate change. As a result of collective action by governments, consumers and businesses, Canada's 2020 GHG emissions are projected to be 128 megatonnes lower relative to a scenario with no action.

We are accomplishing all of this without a job-killing carbon tax, which would raise the price of everything.

It is the responsibility of each of us as consumers to make the right choices. As long as we continue to consume, the demand will be there for products to be made. I would encourage my colleague to think about reducing his own consumption by one-third of everything: one-third of the food, one-third of the heat he uses in his house, one-third of the transportation that he does. It is responsible consumers that are going to drive reduction and change the climate.”

Note 3: Photo (above right) from today’s Globe and Mail showing an WK180-C, an assault weapon made in Canada by Kodiak Defence Inc. “Semi-automatic weapons such as these have dominated Canadian governments' discussions about dangerous firearms, but according to data obtained by The Globe, they play little part in Canadian gun violence.”

0 #3 Dan Deson 2019-10-07 04:26
In 2014 I I met with Lois Brown MP. I asked if she would be supporting Conservative MP Michael Chong’s Reform Act Bill. Lois said she does not support it because it goes against the constitution of the Conservative Party
When asked about supporting representative democracy via a proportional representation voting system. Lois rejected it because we already have a good system that the Conservatives support.
There seems to be an inconstancy in her two stances.
Quote
0 #2 JSydneyH 2019-09-25 17:04
I am concerned about their 'selective' observance of the law. Either laws are apply to everyone or they don't apply to anyone. Are they going to ignore provincial regulations to steamroller through change like Doug Ford? Are they going to ignore environmental regulations to jam through a pipeline? Very concerning behaviour from someone I expected to be better.I guess the mantra is win at any cost.
Quote
0 #1 Teresa Porter 2019-09-23 00:42
It is unfortunate that Lois chose to duck the public forum, but then not so surprising. Like Scheer, Ford, Kenny and other Conservatives, facing the public and taking questions is not something they are comfortable with. It is clear that she cannot explain or defend any of the Conservative positions on climate change, immigration, education and taxation. Simple-minded slogans like"I'll put more money in your pocket" (while slashing services) are all they have.
Quote
Refresh comments list
RSS feed for comments to this post