Tom Vegh and his new Library

What should we make of Tom Vegh?

Newmarket’s Deputy Mayor and York Regional Councillor is now a full-time politician with a salary to match. He is in a position where he could, theoretically, make a difference. But, so far, he has proved to be a complete dud.

During last year’s election Tom Vegh promised that the voters’ priorities would be his primary focus. His campaign literature highlighted one of those priorities - a new library and seniors’ centre at Hollingsworth Arena site.

Voters could be forgiven for believing he was deadly serious. His campaign flyers pointed to his “leadership roles”, someone with heft. We learn he was Vice Chair of the Newmarket Public Library and Chair of the Town/Library Efficiency Task Force.

Last October Vegh told us he had:

“a solid understanding of the issues and needs of our town and a proven track record of getting results”.

On 8 April 2019 the Town’s Committee of the Whole received a staff presentation and report on decommissioning the old Hollingsworth Hockey Arena where Vegh planned to have his new library and seniors’ centre. Instead of telling us about his exciting plan for a new library he called for a “brainstorming” workshop:

“We can speak to our constituents. We can bring forward our ideas as part of the process… A bit of brainstorming from Council on what we would like to see for that site in addition to something coming back from the staff based on whatever they feel it should be based on.”

Vegh has had years to ruminate about Newmarket Public Library but, typically, he was displaying none of the leadership he constantly boasts about. His solution is to have another workshop.

Last week I sat in on a Newmarket Library Board meeting where the Library Chief Executive Todd Kyle was updating Board members on the Town’s latest strategic priorities exercise and the implications for new or enhanced library facilities. 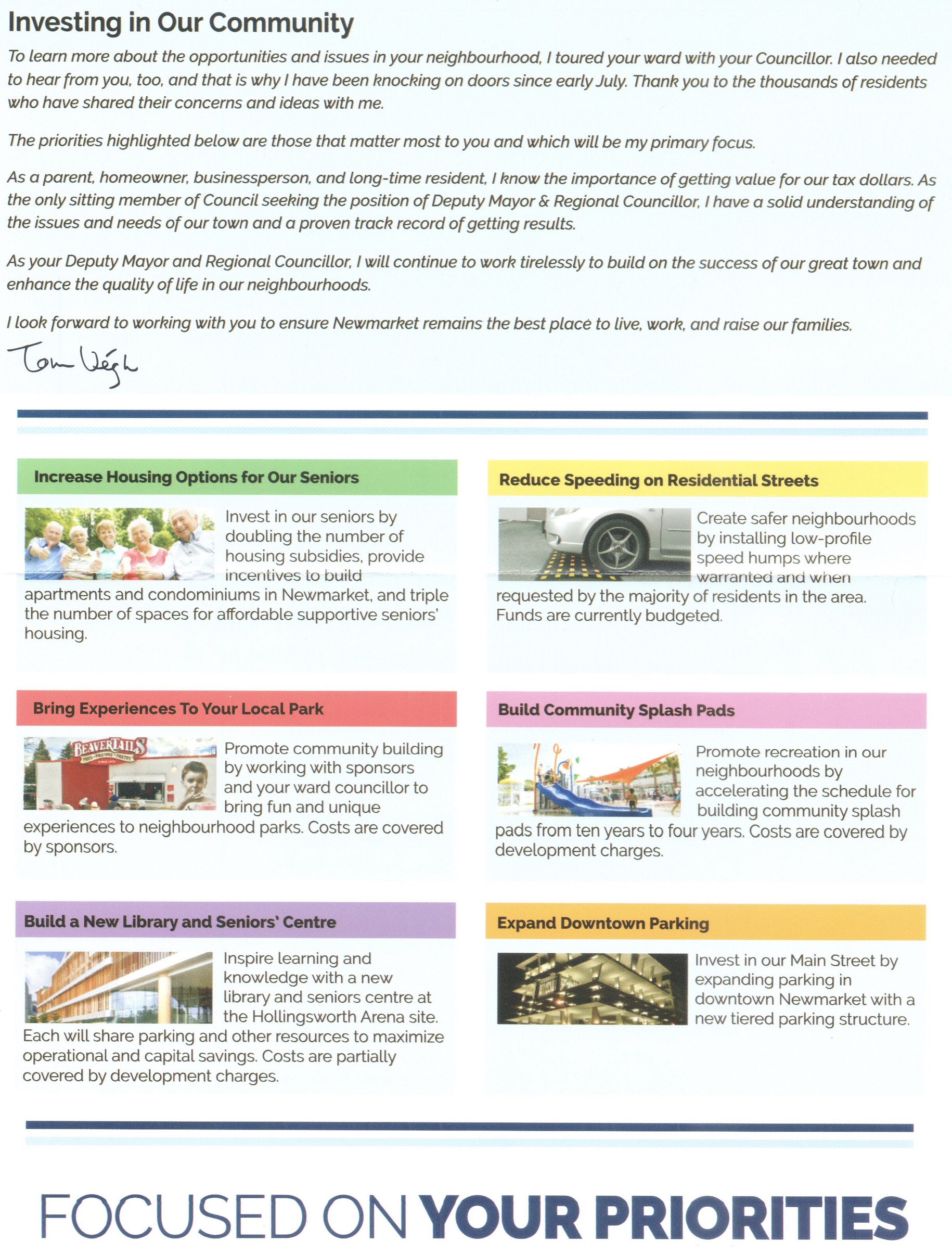 Who are these people? Why are they here?

There were two of us (members of the public) sitting in on the meeting. I found the atmosphere slightly strained. It was as if Board members were asking themselves: Who are these people? Why are they here and what do they want?

After the Board had dealt with some confidential matters we were ushered in to the tiny Board Room by Todd Kyle and took our seats. Unusually there was no greeting from the new Chair, Darcy McNeill. (The last time I sat in on a Board meeting was about six years ago when everyone stood up and, in turn, shook my hand.)

Todd Kyle is now speaking to his report which, he says, may prompt a discussion. (See Agenda item 5.1)

He says there has been a lot of discussion and a willingness to move forward and there are lots of connections with the Town’s new strategic priorities (although the library doesn’t feature as one of them).

Now we are on to Ian McDougall, the Town’s Commissioner of Community Services, who has been invited along. He talks in a weird kind of managerial-speak, mangling the language. He says he has been discussing things with Todd for a long time but he is now going to

“Circle back with Todd and map out a game plan. This is something that has been parked for a while.”

McDougall tells us that there were discussions back in February 2018 but, because the municipal elections were so close (October 2018) it was decided to refer any further consideration on the library issue to the newly elected Council’s strategic priorities exercise for the 2018-2022 term.

He tells the Board that just because the library doesn’t feature as a priority that doesn’t mean it is not a priority. That would be to misinterpret what happened. In McDougall’s Orwellian-speak the Town’s decision to exclude the library from its list of priorities should not be taken as a sign that the Council is not interested in the library. No. No. No. He talks about the possibility of a joint needs assessment and getting things moving soon. He says elliptically:

“We find ourselves back at another starting line.”

What will the library of the future look like?

Now Library Vice Chair, Jane Twinney, offers her thoughts. She makes a glancing reference to Hollingsworth – only to dismiss the idea of a library there. There is no need to rush things. We are told we need to go through a process so we land where we want to be. Now she is warbling on about the libraries of the future. What are they going to look like? There needs to be a combined effort with the council to decide where they are going. She says it will be a good… Jane is now searching for the word. Library Chair Darcy McNeill gingerly suggests the word “undertaking”.

“It will be a good undertaking.”

Now Councillor Kelly Broome is talking about involving School Boards who are, we learn, doing a lot of work on “hubs”. She talks of partnering but doesn’t explain what that means in practice. I get the impression she believes the Council shouldn’t be doing anything on its own.

The rest of the Board are acting as spectators, not venturing a view. But, wait,  someone directly in front of me is talking about “key milestones” and “decision points”. He wants to know at what point the school boards are brought in.

Which is the perfect cue for Jane Twinney to call for another workshop. More robust than the last.

Now Ian McDougall is intoning about a scoping exercise. He is going to

In the course of these exchanges no-one mentions Regional Councillor Tom Vegh or his proposed new library. This must be the ultimate insult. A Library Board choosing not to discuss a proposal for a new Library from the Town’s Deputy Mayor. 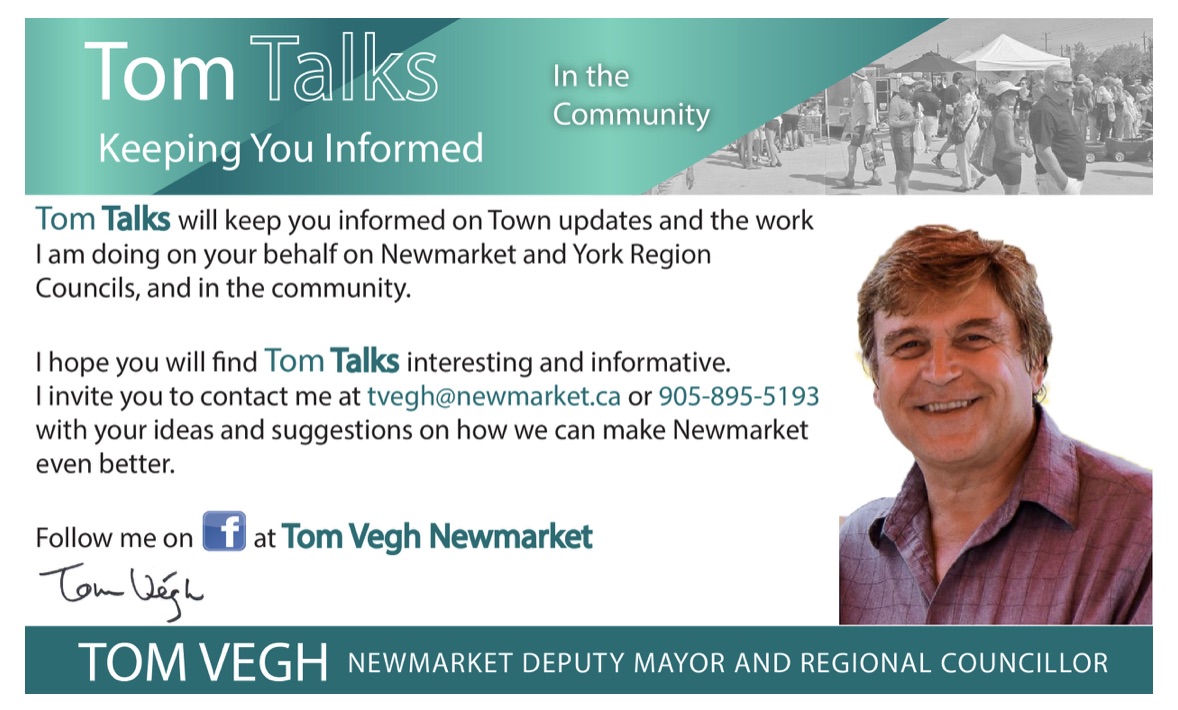 Apart from Jane Twinney’s blink-of-an-eye reference earlier, no-one mentions the upcoming meeting (Tuesday 21 May 2019) on Hollingsworth. Has Todd Kyle even had a conversation with Vegh about the possibility of a library at Hollingsworth? He won’t say. Has Vegh asked to speak to the Library Board about his plans?

“leadership you can count on”

that Vegh boasts about?

Vegh now spends a lot of time promoting himself on social media. His latest venture is “Tom Talks” which is a misnomer. Vegh is a dilettante afraid to engage in debate. I want to hear “Tom Explain” how he will deliver on his election promises. But that is expecting too much from him.

Vegh can, of course, prove me and all the other doubters wrong by arguing the case for a new library and seniors’ centre on the Hollingsworth Arena site at Tuesday’s meeting.

Vegh is not to be blamed.

It is just not in him.