Walter Bauer urges us to Be Brave. Vote Green

I meet Walter Bauer for a mid-morning coffee at the excellent Cardinal Press Espresso Bar in Newmarket’s old Main Street.

He asks for hot chocolate served up in a “real cup”. I follow suit, immediately impressed by his green approach to the smallest of things. 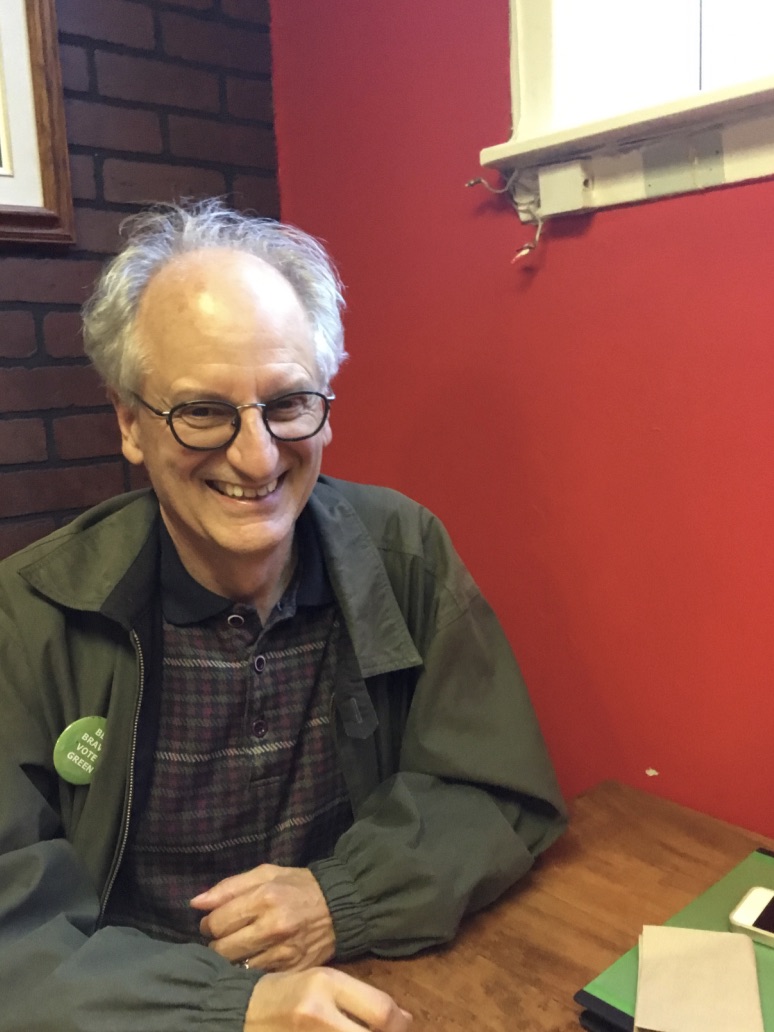 Walter, the relaxed and affable Green candidate for Newmarket-Aurora, is wearing a lapel badge telling us to Be Brave and Vote Green.

On Monday the Greens published their election platform so we shall have lots to talk about. It runs to over 80 pages - with arresting photos and graphics. I print out only the contents pages and plan to ask him to pick a topic and we’ll take it from there.

But first I suggest the document is a hostage to fortune. There is a long list of commitments and they’ve got to be paid for. And the Parliamentary Budget Officer who has been asked to cost the proposals won’t finish the math until next week.

I suggest the Green’s slogan:

Not Left. Not Right. Forward Together

(apart from being clunky) is disingenuous. It seems to me they are putting forward a platform that most left-of-centre people would feel very comfortable with.

Walter reminds me it also calls for a balanced budget. I suggest this is something political parties feel obliged to promise or risk being seen as reckless and profligate. As we all know, the national debt rose relentlessly under Stephen Harper and Conservative Governments in Canada routinely live with deficits if the alternative is hiking up tax rates.

Walter wants to go after those who evade tax who increase the tax burden on everyone else - those who play by the rules. Speculators and house flippers are also targets. He wants to see a “Guaranteed Livable Income” to lift people out of poverty. (The details are in the Platform at page 59). Seems to me the Green commitment is to fair taxation.

Walter is a professional engineer who is semi-retired. He also acts as an expert witness focussing on the consequences of delay for any given project. He also deals with productivity issues. When he retired from engineering he lived on the land for five years, building his own home and raising chickens. He wanted to vote Green but there were no candidates – so he got in touch with the Party and offered to become one. He stood in Richmond Hill in last year’s Provincial election.

We are now talking about global heating and I suggest the political climate has, perhaps, never been better for the Greens. The Canadian north is now heating up four times as fast as the rest of the planet and people seem to be listening to the arguments in a way that never was the case before. He agrees.

He says he is getting a terrific reception on the doorstep and voters are genuinely concerned about climate change. He has 78 lawn signs ready to go into the ground and is confident the Greens will do well. (He tells me the Greens had to pay a non-refundable $500 to the Town for a permit to put up election signs! With their meagre resources, this represents a big slice of the money the Party has to fight the election.)

Is a Green vote a wasted vote?

But what about the wasted vote? In a riding like Newmarket-Aurora, dominated by the old duopoly for as long as anyone can remember, why should people vote Green?

He says we should vote for people who will make a difference – not the same old, same old. He says he is angry at all the bull we get from the main parties.

I tell him he is coming across as the angry man and he just laughs.

He says his campaign is trying to shift opinion, move the needle, on some of the most pressing challenges we face, here in Canada and around the globe.

We cover a lot of ground with me dipping into the Green Platform wherever I see commitments which to me appear controversial or pie-in-the-sky. But Walter gives as good as he gets.

His home page is the CBC (which he says is underfunded) and he devours books like there is no tomorrow. I could talk to him for ages but he has to go and meet the students at Pickering College’s Green Club. He hopes the international students will talk about green initiatives being taken in their home countries. Sounds good.

We shake hands and I thank him for being so open with me. When I fire questions at Walter he doesn’t duck and dodge or hesitate or equivocate. He gives straight answers to straight questions. I find this very refreshing. Too many politicians seemed trained from birth to tell you what you want to hear rather than tell you what they really think.

As we leave Walter says he is going to be making a big announcement at the Newmarket candidates’ debate.

There is a theatrical pause as he waits for me to ask what it will be.

This is one secret he is keeping up his sleeve, for now.