Morad Dadgar's new development at 1011 Elgin Street is still under construction but already it dominates the streetscape.

A report going to the Town's Committee of the Whole on Monday (16 October 2017) gives options for controlling this kind of inappropriate, out-of-scale, infill development but whether anything will change - at least in the short-term - is doubtful.

A similar report went to councillors in March 2012. Indeed, the latest report lifts chunks of text from the earlier one.

Insofar as we can tell, Mr Dadgar has followed all the rules.

The Director of Planning, Rick Nethery, says the owner only needed a routine Building Permit from the Town because the Zoning By-Law requirements in respect of setbacks, height and lot coverage had been met.

Because the buildings were deemed to meet the Zoning By Law requirements there was no public consultation whatsoever. Neither with neighbours nor with anyone else. Issues such as overlooking and loss of privacy were never considered. (Right: windows at the rear of the new house overlook the neighbour's hitherto private garden.)

This wasn't an accident or an oversight.  The very issues identified by the Planning Department over five years ago quite simply have not been addressed.

It is perfectly possible to regulate the nature of development. That's what diligent planners are paid to do. Indeed, the March 2012 Report tells us:

The stipulated maximum lot coverage for 1011 Elgin Street is 35%. The site plan submitted to the Town's building control people showed the proposed lot coverage would be 31.3%.  The Director of Planning told me the building complies with the 35% zoning standard and that assurance is good enough for me. 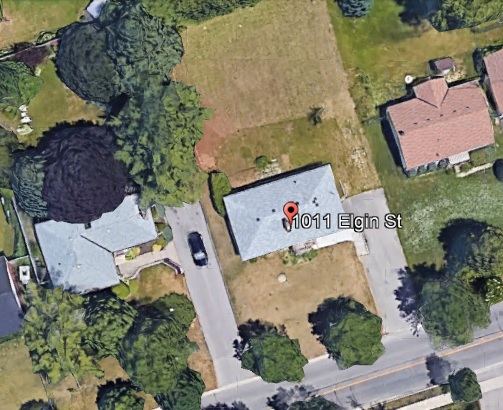 Nevertheless, we see here a powerful optical illusion at work. The building at 1011 dominates the lot on which it sits yet, in reality, it occupies less than a third of the lot.

Fortunately, we can find out the approximate lot coverage through GIS mapping. The Planning Department could do this in a matter of moments. (The image right from Google shows the property as it was before the current development got under way.)

"Through the use of GIS mapping, the approximate lot coverage for low density dwellings in established neighbourhoods can be determined."

Infill development in stable residential neighbourhoods is all about respect. Over five years ago, in that perceptive March 2012 report, the Town's planners said this:

"While intensification is directed to the Town's urban centres, limited intensification can still occur in stable residential neighbourhoods. If done respectfully, the development can be of value to the community. However, redevelopment can occur in a manner that does not respect the built form that exists. In older neighbourhoods, the existing lot areas and frontages are large enough to accommodate larger homes while still meeting the requirements of the Zoning By-Law. As a result, new development can occur in a form that is inconsistent with the height, building footprint, design and character of the existing residential dwellings in the neighbourhood." (My underlining for emphasis.)

And that is exactly what has happened at 1011 Elgin Street.

No consultation. No discussion. No consideration.

One word says it all.