Ford to reward developers if they build “affordable” houses and apartments (under $1,034,000)

Developers will not pay a cent towards the cost of providing roads, water and sewage and other key infrastructure needed to service new developments providing the housing is “affordable”. In York Region this would mean houses and apartments selling for $1,034,000 or less. Instead, the costs will be transferred from developers to local taxpayers. 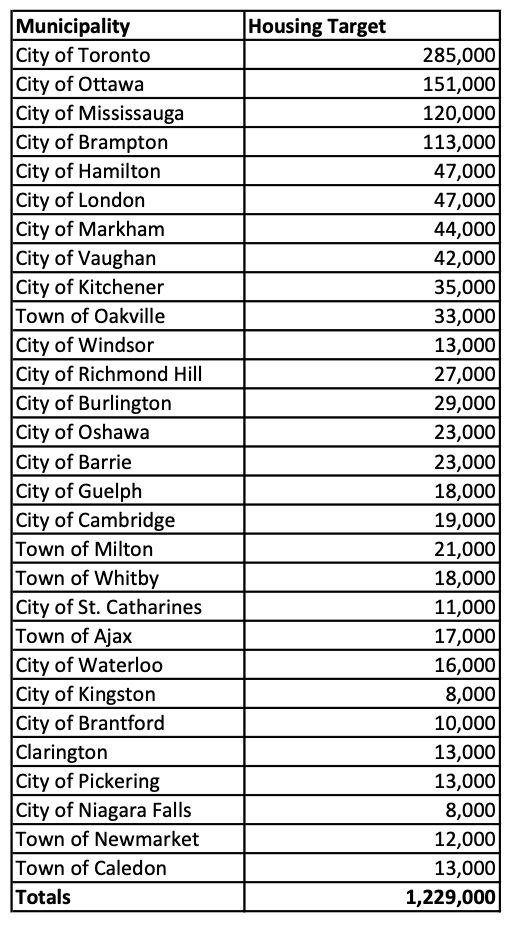 Background: The More Homes Built Faster Act (Bill 23) – championed by Newmarket-Aurora’s new MPP, Dawn Gallagher Murphy – is deeply flawed legislation, rushed through Queen’s Park at breakneck speed with next to no consultation, leaving important details up in the air.

In a reward to their friends in the development industry, the Ford Government will no longer expect developers to pay Development Charges (DCs) on newly built housing which is deemed to be “affordable”.

What are Development Charges?

These DCs are fees paid by developers to municipalities to help pay for the capital costs of infrastructure needed to service new development. Without these DCs the costs of growth will fall on local residents rather than the developers.

York Region and lower tier municipalities such as Newmarket will take a huge financial hit as legislation will exempt thousands of newly built homes and apartments from DCs.

York Region’s Committee of the Whole last week considered a commentary from staff warning that Bill 23 introduces new definitions for housing affordability which is to be 80% of the average purchase price of a home.

“... Prior to Bill 23, using the Province’s definition of affordable home ownership, a York Region household that earns approximately $120,000 annually can only afford a home priced at $536,000.”

“In 2021, 80% of the average purchase price for homes sold in York Region ranged from $520,000 for a condominium to $1,282,000 for a single detached dwelling (or an average of $1,034,000 for all unit types). Having a threshold at 80% of the average purchase price for a home is too high to be considered an affordable ownership option for many residents in the Region and will now be subject to a full DC waiver.”

Unclear how average is to be calculated

The Regional Treasurer, Laura Mirabella, tells members the legislation does not define how the average will be calculated. She expects the definition to come next year. Will the average be calculated using sale prices by Region? Or, more narrowly, on a municipality by municipality basis? Or even on a Province-wide basis?

“It is completely unclear how “average” will be defined. But, yes, if the purchase price of affordable ownership housing new-builds is deemed to be 80% of whatever that average purchase price is, there would be a full exemption which would be a significant loss in development charge revenue for us.”

She says it is uncertain how many developers would take up the call to provide homes for sale at 80% of that average. (Click "Read More" below to read the exchanges)

Half a million dollar jump

“This is well above the provincial definition we've always used for affordable homeownership. For households that earns in our case, and it's based on the lowest earning 60% of households typically, it is $132,000 annually who can afford to buy a home which would be priced at about little over $500,000. So that's a half a million dollar jump for an exemption. And it is significant. It will add up to a lot of lost development charge revenue for municipalities.”

The More Homes Built Faster Act is half baked and the legislative process that produced it is broken. Queen's Park is a complete circus.

How is it that our MPP, Dawn Gallagher Murphy, can vote for legislation which mandates Newmarket to accept 12,000 new homes by 2031 when the Town's Mayor, John Taylor, is on the record saying that is an impossibility? (See table right)

How is it she will vote for a Bill which does such damage to housing services for the most vulnerable?

Bizarrely, Bills can receive Royal Assent before the end of the consultation period.

In a single chamber legislature such as ours - with no "sober second thought" back-stop - there is a special responsibility on MPPs to ensure the legislation they vote for is not incoherent rubbish.

See also: What the Government is proposing and York Region's response. And here.

Update on 30 December 2022: From the Toronto Star: Need for services casts doubt on Province's plan

Commissioner of Finance and Regional Treasurer, Laura Mirabella: Mayor Scarpitti mentioned studies and mentioned land. Bill 23 does indicate that studies will no longer be a DC eligible service. It has not been fully defined and we are seeking clarification. There are a number of studies that draw on development charges that are considered necessary by councils in order to plan for future growth. Those can be anything from DC background studies to master plans and some of the other more specific studies mentioned by Mayor Scarpitti. It is unknown which or whether all of those studies would be excluded. We do have in our background study about $32 million for studies and so if all of those studies must be excluded that would be an additional loss of $32 million over 10 years.

The other item mentioned was land. What the legislation says is that land for certain prescribed services could be excluded from the development charges. The kinds of land or the kinds of services has not been yet defined. It will be defined in regulations which we do not expect to see until the first quarter of 2023 at the earliest and so we have no real basis of estimating what the actual loss on land will be. I can tell you that over the next 10 years we have $75 million in our DC background study for land.

We have not been able to estimate at this time what we think the impact will be. We continue to do some analysis, ask some clarifying questions but it maybe early in the new year before we are able to estimate the loss in revenue with respect to those are. I'm sure Mr Freeman could comment on what those criteria are better than I.

Mayor Scarpitti: And just before Mr Freeman… I am just trying to understand. It says that it is full exemption for affordable ownership which is defined as 80% of the average purchase price. So that's what is deemed affordable?

Commissioner Mirabella: That's what the legislation says. What we don't know is how will the average be calculated. Will it be calculated over a broad region? Over more narrow on a municipality by municipality basis? Over a regional basis? On a province wide basis? It is completely unclear how “average” will be defined. But, yes, if the purchase price of affordable ownership housing new-builds is deemed to be 80% of what ever that average purchase price is, there would be a full exemption which would be a significant loss in development charge revenue for us. And as I say at this time we unable to provide a good estimate to council on what that would be because I think we need to understand more about what the average purchase price would be and how many developers would take up the call to provide homes for sale at 80% of that average.

Mayor Scarpitti: So this does change… and I would be interested Mr Freeman's information as well. But this does change the definition of affordable housing. I think it changes it because that's not… how we described it before.

I can tell you that we just had a report the other day in the city of Markham. Going back, and it was several years ago, we had 60% of the housing that was built was deemed affordable. And again, based on the formula and definition that we've always been using, and certainly in the last year or so there's been 0% of units built.

So I guess I will be interested… How does this compare to the way we used to define an affordable housing unit if we are now gonna take 80% of the average? So I am assuming that will capture way more number of units using this criteria because it doesn't matter what the average price is - the prices can all be going up - but we still have to capture and exempt the housing that would be deemed 80% of the average the purchase price. So I would assume it would exempt thousands more units if we use that definition compared to the one that we used to use.

Anyways it sounds like another major financial headache. And, by the way, as we've all done, we have exempted subsidized, non-profit housing projects in our community as others up around the table. So that's nothing new and we've done that for many years.

But this is a game changer. This definition, if I’ve understood it correctly in the way that Commissioner Mirabella has just described. I would like to hear Mr Freeman if he had anything else to (add).

Chief Planner, Paul Freeman: Mayor Scarpitti you hit on something extremely significant. You are generally correct. This is thousands and this is a big hit on development charge revenue for municipalities. What this paragraph is saying is that affordable ownership housing is defined for DC purposes as 80% of the average purchase price of a home. And they get a full DC exemption. It must be maintained as affordable for 25 years. I'm not sure how an ownership unit would be (deemed that) over 25 years and that's a big question that we have.

This is well above the provincial definition we've always used for affordable homeownership. For households that earns in our case, and it's based on the lowest earning 60% of households typically, it is $132,000 annually who can afford to buy a home which would be priced at about little over $500,000. So that's a half a million dollar jump for an exemption. And it is significant  It will add up to a lot of lost development charge revenue for municipalities. That's for ownership. There's also exemptions for rental. And I could go into that. I will be providing more information on that in the council education session but it is also significant.