"Don't tell me they don't expect something in return": Why municipal election candidates in the 905 are refusing lucrative donations from developers

Tom Vegh takes tens of thousands of dollars from people in the development industry - and I don't.

He is in their pocket and I am not.

It really is as simple as that.

Click 'read more" below the photo to read the full article. 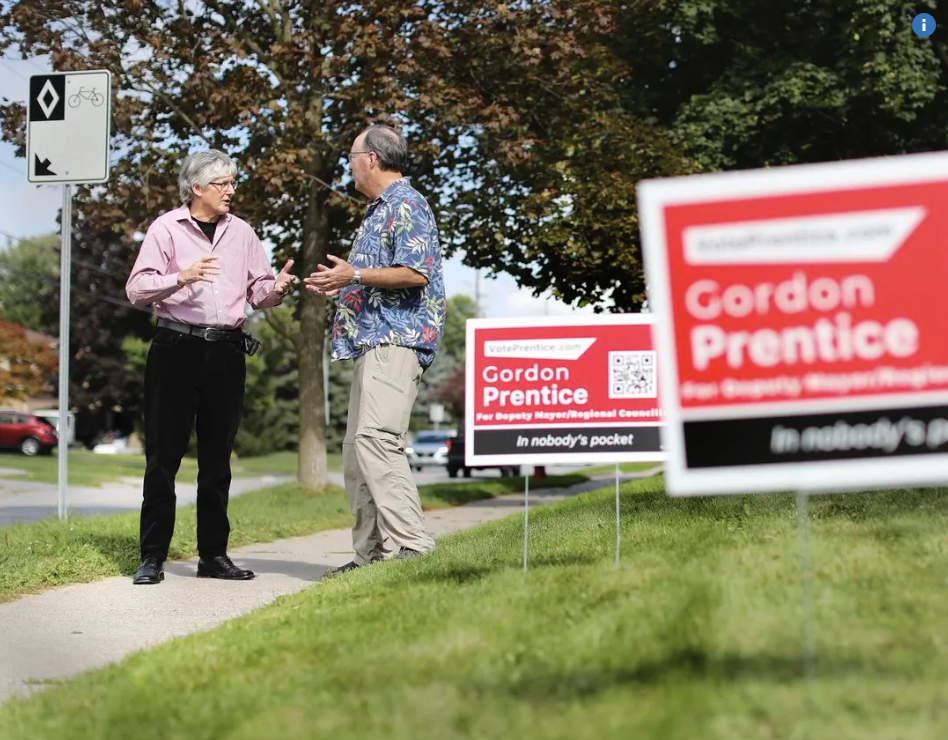 As his campaign signs boldly state, Gordon Prentice is “in nobody’s pocket.”

Prentice, who is running for the deputy mayor/regional councillor seat in Newmarket, said a vote for him means a vote for a candidate who will always put the public’s interests first — ahead of developers

“Perception is everything,” said Prentice. “You don’t want to put yourself in a position where the average person on the street would think you have an obligation to one’s donors.”

In Pickering, two of the three mayoral candidates are also refusing developer money as they vie for the city’s top job. On his website, Brad Nazar is forthright: “No donations from developers, development entities, individuals linked to those entities, or individuals related to developers will be accepted.” His opponent, Janice Frampton, said she too is refusing all developer donations, so she is not “beholden” to anyone.

The three are part of a small group of candidates in 905 communities this election who say they are shunning lucrative developer donations to bring transparency and a focus on the public interest back to local councils.

It’s a particularly tough stance to take in a region where development pressures are intense, but they join a small number of incumbents in the GTA who have managed to stay free of developer funds over the years, relying instead on grassroots donations or self-financing their campaigns.

“The reason I do not take donations from developers is largely because I have witnessed, over many years, the erosion of trust in elected officials and the increase in cynicism in government,” said Newmarket Mayor John Taylor, who was recently acclaimed as mayor for next term. “I never want the residents of Newmarket to wonder who I represent or whose corner I am in.”

In 2016, the Ontario Liberal government passed a law that banned donations from corporations, businesses and unions to municipal candidates. Thus, only individuals can donate to campaigns, up to a limit of $1,200.

But that hasn’t stopped the development industry, said Pickering’s Nazar. “Companies can’t donate, but what they end up doing is have the CFO donate, the CFO’s 18-year-old son donate — the whole family ends up donating,” he said.

Nazar has created a website that he says shows how much Pickering councillors received from developers during the 2018 election. His research found that almost 90 per cent of donations to councillors in 2018 came from outside of Pickering. And 80 per cent of all donations came from individuals linked to property development corporations or who work in businesses linked to developers.

Nazar said he’s not antidevelopment, but believes there needs to be responsible development, such as affordable housing. He says the city’s priority shouldn’t be to make developers richer, but to make the city livable for its residents.

“Of the 5,000 units that are supposed to go up in Pickering Town Centre, not even one is affordable housing,” said Nazar. “What are we even doing here?”

Robert MacDermid, a retired York University professor who has extensively studied the relationship between developer donations and council decisions, said that municipal politics is more susceptible to the influence of developers because this is where land-use decisions are made.

“A developer buys land cheaply on the edge of the city, and then they get the land rezoned. And who does the rezoning? Municipal councils,” he said. “They have every interest in making sure that municipal decisions are beneficial to them.”

But he said the problem now is not with the law for election financing, but with those who circumvent it by having their families and employees donate to local politicians.

“There’s no enforcement. There’s no clerk who will do the due diligence to see where the money is coming from, when really anyone could check by cross-referencing names and addresses,” said MacDermid. “The law is deficient in that it is not being enforced, and it’s easy for people to get around it.”

MacDermid said to improve transparency, the disclosure form for donations could be updated to require additional information like name of employer, or job title.

Others say requiring candidates to post their financial statements prior to election day would give voters additional transparency.

Justin Sherwood, a spokesperson with the Building Industry and Land Development Association (BILD), said “in our democratic system, and subject to the rules governing municipal elections, any person who is a resident of Ontario can make a contribution to a candidate’s campaign.”

Vaughan ward councillor Marilyn Iafrate, who has been in office since 2010, said running a campaign without developer donations has forced her to keep things simple and forgo big ticket items like a campaign office.

But she said in her first two campaigns she had to put in thousands of dollars of her own money to break even. “But it’s worth the money not to be indebted to anybody.”

Iafrate said in 2018 one developer came to her, mistakenly asking for her to repay a debt. He thought he had donated to her election campaigns over the years, and asked her how she would be voting on a matter at council that would impact a housing project involving his company.

“He called me, and he was trying to get me to change my mind. He said to me, ‘I helped you, now you help me,’” she said. “I was shocked, and I kindly reminded him to check his records and I had never taken his money.

“Don’t tell me they don’t expect something in return. Of course, they do.”

Georgina Mayor Margaret Quirk said that she too has had to rely on her own funds to run her campaign, but said there are strict limits around how much she can contribute based on number of voters in her riding and she must include financial contributions from previous elections.

“As a mayor, it does get more difficult to run a campaign, and especially in a larger municipality, most mayors would be hard-pressed to raise the funds fully on their own … so I don’t begrudge those who do,” she said, about candidates who accept developer money.

Halton Hills councillor Jane Fogal, and Milton councillor Colin Best have also declined donations from developers during previous campaigns, and this time too.

“It does put me at a bit of a disadvantage,” said Fogal, who said now she has to reach out to community members and the general public for funds. “But only because I have to work harder.”

At a time when housing is in short supply, some find that taking a stand against developer influence on local politicians is not easy. Toronto resident Diana Yoon, who pulled out of her bid for ward councillor to launch the #nodevelopermoney pledge last month to “get developer money and influence out of politics,” has faced some criticism on social media from those calling her campaign “NIMBY” and accusing her of “attacking developers.”

“Which isn’t the point (of this campaign),” said Yoon, in a statement. “The point is that municipal housing policies can be more ambitious with less corporate developer influence.”

But those who take such donations — including the majority of councillors in the GTA — say there’s nothing wrong with it. Pickering’s third mayoral candidate, Kevin Ashe, who received thousands of dollars from individuals connected to the development industry in 2018, said his campaign “draws from all walks of life and backgrounds” and is “100 per cent compliant with municipal election laws.”

He said the issue of developer donations is not a priority for the public and has only come up twice out of the thousands of people he’s talked to this campaign.

Ashe said he has never felt influenced by those who donate to him. “I don’t believe in this day and age, a $1,200 donation should have an impact on a politician,” he said.

Back in Newmarket, Prentice’s opponent, Tom Vegh, said he received a handful of donations from developers in 2018, but he too has never been influenced by them.

“For the past 20 years, my vote on council has always been based on the best interests of Newmarket residents and the impact on their quality of life,” he said.

But for Prentice, the issue is not a personal one. He believes it’s a matter of principal.

“In this election, you have a binary choice: are you going to choose someone who is being funded by developers or not? It’s as simple as that.”

Noor Javed is a Toronto-based reporter for the Star covering city news with interest in 905 municipal politics. Follow her on Twitter: @njaved