Ford’s Regional Review: why not kick the Mayors off York Regional Council?

This afternoon I wander down to the York Region Administrative HQ where I have been given the opportunity to address the two special advisers, Ken Seiling and Michael Fenn, who were appointed in January to review regional government in Ontario and to come up with recommendations. (Photo: the advisers in the centre of the hemicycle waiting for the kick-off.)

Astonishingly, there are only five of us down to speak. There’s CUPE, the Ontario Library Association, a delegation from the Unionville Residents’ Association in Markham, the Director of Markham Museums and me, a member of the public.

We are seeing consultation by stealth. No full page ads in the press. No email blasts. And only a few days to get your request in to speak. You blink an eyelid and you’ve missed it. Hmmm. Too bad!

In an email beforehand from the advisers’ back-up team I am told I have been given 3 – 5 minutes to make my case.

“When preparing your remarks to the advisers, please keep in mind that the advisers want to hear your views on the way your elected municipal representatives make their decisions and represent your community. The advisers also want your thoughts and observations on the efficiency, effectiveness and cost of the various municipal services that your municipalities provide. In particular, the advisors are looking for your feedback on regional governance; decision-making and service delivery.”

That’s a lot of ground to cover in three minutes.

As the CUPE person is standing at the lectern Michael Fenn says that because there are so few of us we now have ten minutes.

I decide to concentrate my fire on three targets.

First, there has been next to no background information provided by the Province. I tell the advisers I have no sense of where they are coming from. Will the review recommend amalgamations?

The review asks if two tier structures are appropriate for all municipalities. But we have zero information on the costs of moving to a single tier. These are likely to be very substantial. I rely on reports from Mississauga (which wishes to secede from the Region of Peel):

“Studies done by various researchers and academics have concluded that amalgamations in Ontario and in other provinces have resulted in cost increases, not cost savings or service efficiencies.”

We have no evidence on the costs of previous amalgamations and their impact on service delivery.

Second. I believe local government should be as local as possible. And I take it as axiomatic that citizen involvement is a good thing. So getting rid of the lower tier and uploading everything to the regional level wouldn’t be desirable. And it wouldn’t work. York is not a city region. It covers a huge area. I mention efficiencies arising from co-operation between the lower tier authorities.

Third. I move swiftly on to governance issues. Three years ago I gave evidence to the Bill Committee at Queen’s Park and argued for the direct election of the York Regional Chair. I was disappointed the Ford Government cancelled the 2018 election at the same time it was cutting Toronto City Council by half. I remind the advisers the then PC Opposition voted with the Liberal Government to have York Regional Chair elected by the voters at large.

Now I hear myself quoting from a chunk of my Queen’s Park speech. Why can Durham have an elected Chair but not York? (Photo right: Durham Regional Chairs debate 2018).

York has a population bigger than PEI, Newfoundland, Labrador, New Brunswick, Nova Scotia and Saskatchewan – and is closing on Manitoba. Yet the Chair is indirectly elected by 20 people. 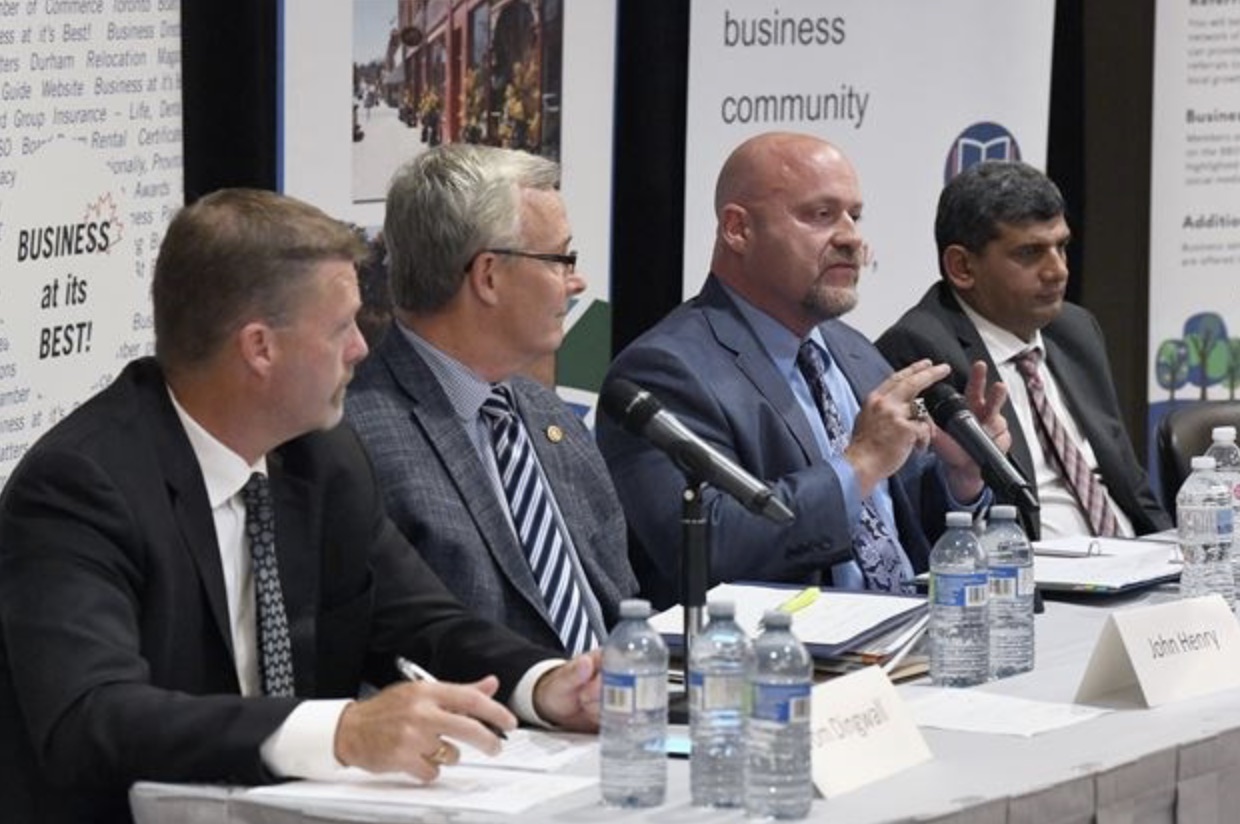 I tell the advisers I would be surprised if one in 1,000 people could name the regional chair, Wayne Emmerson. He is totally invisible to the general public.

Now I am well into my stride. I am on top of my soapbox talking about the importance of elections. They are about competing visions of the future and about deciding priorities. In the absence of elections these debates happen but in a muted way inside this hermetically sealed Chamber. Now I am galloping along.

There is no citizen involvement to speak of. And the method of election to York Region is also part of the problem. The system used is “Double Direct” and it  doesn’t work. The review team has given the public no explanation of what it is and possible alternatives. (There is one election for double direct with Mayors and Regional Councillors sitting on two bodies – the lower tier municipality and the Region.)

Academics say that with double direct the upper tier is less accountable to the community and there are conflicts of interest with members trying simultaneously to represent the views and policy positions of the upper and lower tiers which may be different. I agree with that.

Mayors not pulling their weight

I tell the advisers I have spent years observing members of York Regional Council and many of them make next to no contribution at all. Mayors are passported on to the Region, picking up their $55,000 “stipend”. Some are disinclined to make any effort at all, focussing solely on their own patch. And regional report-backs to the lower tier can be very perfunctory.

Maybe that will change now that we have live streaming from the Regional Council Chamber, a recent innovation.

The solution is to take the Mayors out of the regional tier and have Regional Councillors focussed exclusively on regional priorities.

The advisers want to know how big my regional council will be. Answer: as big or as small as you want it to be.

I have 1:45 seconds left and decide to get something off my chest that has been bugging me for years. In Newmarket planning approvals for major developments were given to landowners ten and even twenty years ago but nothing has been built. We see a patch of dirt where the condo should be. We need sunset clauses to revoke planning approvals if they are not acted upon after, say, five years. I concede this is off-point but it chimes perfectly with the Ford Government’s announcement last week to get more housing built in shorter timeframes.

And that’s it. Time’s up. My suggestions will no doubt be filed away and be forgotten while Ford redraws the municipal map.

York Region will decide its response to the Regional Review on Thursday 9 May 2019 following the advice of a working group consisting solely of the Mayors of the nine constituent municipalities.

Members of the public have until May 21, to submit their views. 500 words of less, please!

Recommendations from the advisory body will focus on the following questions:

Questions on municipal governance and decision-making;

Update on 14 May 2019: And this is how Newmarket Today covered the story.