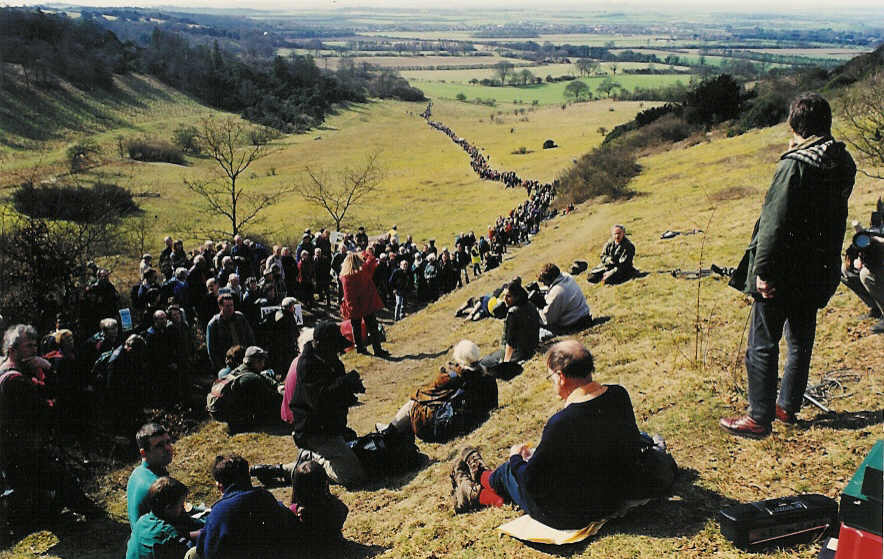 I am a member of the splendid Oak Ridges Trail Association and I enjoy getting out and about into the countryside when I can. Though the idea of bumping into a bear still freaks me out.

These days it doesn’t seem remotely controversial to say that people should have the right to roam over open uncultivated country. But that wasn’t always the case – at least not in England and Wales.

Only 20 years ago huge tracts of mountain and moorland were out of bounds to walkers. Over 4 million acres in a small densely populated island were effectively no-go areas.

Way back then many of us were involved with the Ramblers in trying to get the law on access changed and, after a huge struggle, we were successful.

I was regularly accused of "class hatred and class warfare" which is absurd. I like Downton Abbey as much as the next person. And people who know me will testify that I always defer to my elders and betters.

Speaking of which… The photo above left was taken at a rally on Shirburn Hill in Oxfordshire on 14 March 1999. And that’s me standing on the right holding a microphone addressing a cast of thousands.

Viscount Parker, the heir to the eighth Earl of Macclesfield, had banned access to the rolling downland but there was a public right of way across his land.

People squeezed on to that narrow ribbon of a footpath, stretching away into the distance as far as the eye could see. They were making a point. Very effectively.

It was the weirdest experience imaginable as I heard my words echoing around the hills even as I spoke.

And there were no bears for me to worry about.

The photo was taken by my old friend Andrew Bennett who was president of the Ramblers’ Association at the time. It was later turned into a postcard. The terrific Kate Ashbrook who was the campaign’s driving force is again chair of the Ramblers - for the third time.