MPP hopeful Christine Elliott says the PCs will produce a fully costed platform before the election.

Former PC leadership contender and candidate for the bell-weather riding of Newmarket-Aurora, Christine Elliott, told a breakfast meeting earlier today that the Progressive Conservatives would be producing a fully costed platform before the election. She cannot say precisely when but says it is on the way.

She was speaking to an audience largely drawn from the Newmarket Chamber of Commerce at the Cardinal Golf Club just outside the riding.

In front of me I see the Liberal, Chris Ballard, defending the seat he first won in 2014, flanked by the NDP’s new kid on the block, Melissa Williams, and PC hopeful, the veteran Christine Elliott.

The audience is well behaved and the atmosphere respectful, almost reverential. This would have suited the buttoned-up Newmarket Mayor, Tony Van Trappist, who I see at the back of the room, chin resting on his chest. At public meetings he would often warn members of the public not to applaud.

The MC, Ian Proudfoot, tells us there are 18 questions with strict time allocations involving red cards and a bell. The questions are all supposed to be business related except when they are not.

First question is, inevitably, about the cost of energy. Melissa says the NDP will buy back Hydro, return it to the public sector and cut energy bills by 30%. Just like that! Terrific!

Chris Ballard recalls the bad old days of brownouts in Aurora. The whole creaking electricity system badly needed investment and this is what the Liberals have been doing. He’s happy with the public owning a 40% stake in a well-run company rather than 100% of a basket case. (My words). Christine Elliott says the high cost of hydro is forcing companies to consider relocating in the United States. She said the same thing at the Aurora Chamber of Commerce meeting last week.

Now we are on to spending and debt interest. This is a difficult one for the Liberals but Ballard comes out of his corner swinging, reminding us that Mike Harris spent 15.5 cents in every dollar to service debt and the saintly Kathleen Wynne is spending a manageable 8c. I consider this a good debating point and have Ballard ahead in these early rounds.

Now we are on to Bill 148, the Better Jobs Act. Christine Elliott says everyone wants to see an increase in the minimum wage – but not now. The PCs want to delay the implementation of next year’s $15. Melissa and Chris trumpet their small business credentials saying they understand the pressures facing businesses but sticking with the increase is the right thing to do.

There is no Carbon Tax!

Now we are on to the environment and a question from the floor. What is the PC line on climate change? Woo Hoo!

Elliott denounces the Carbon Tax as a tax grab! The alternative is green energy, not taxing people. Sunshine and wind is the way forward!

Now Chris “Clark Kent” Ballard rips off his suit jacket and, transformed into Superman, zooms into the stratosphere. Our Climate Change expert yells:

“This is a question I love.”

He says there is no carbon tax. The Province has “cap and trade” which targets major greenhouse emitters, driving down pollution and bringing billions of dollars into the Provincial Treasury.

Now we are on to heath care and whether, with rising costs, it is sustainable. Melissa makes me feel as if healthcare is already on life-support with people unable to get a hospital bed and unable to get their teeth fixed. The NDP is gonna pump in cash. Ballard lists all sorts of good things that are happening at Southlake and Elliott laments there is no plan for dementia. This concerns me. I think.

We are rattling along at quite a canter and the politicians are making some good points but, for me, the audience remains too well behaved. No laughing or groaning. Just respectful silence. Occasionally a partisan table (like the NDP one behind me) allows themselves some polite, nervous applause.

Now we are reaching mid-point with a question on Places to Grow, land use policies and affordable housing. Ballard points to 212 Davis Drive as the first purpose-built rental in Newmarket since Confederation. He lavishes praise on the Town and mentions the key role played by Mayoral hopeful John Taylor who is grinning from ear to ear.

Melissa, casting caution to the wind, says the housing situation is in a complete mess. She tells us there should be a land speculation tax and a crack-down on property flipping. The many estate agents in the audience are now getting palpitations.

Now we are back to the minimum wage. In my experience, people who earn much more than the minimum wage are often the most strident when it comes to capping it. Ballard sums it up quite nicely:

“People on $14 an hour are not parking their money offshore.”

They are spending their money here in their own neighbourhoods and communities.

Christine repeats her earlier claim that the minimum wage – pitched at too high a level – is a jobs destroyer with people with disabilities being laid off first. I find myself wondering if this is legal.

Now in a sign of early onset dementia, the Chamber of Commerce is beginning to repeat itself. We are back on hydro. Now a super-charged Ballard blasts the “gas plant stuff” (which no-one has mentioned) demanding it should “be put to bed”.

He is now going on about Ontario having the fastest growing economy in Canada, outpacing all the G7 economies. The Provincial Government is investing in infrastructure which is needed to support growth.

Christine says if there is all this growth the Province shouldn’t be running a deficit. All this spending:

Andrea will be looking at it

Now more repeat questions on topics we’ve had already. Some in the audience – here from the beginning - are nevertheless probably hearing the questions for the first time. But now a question on transit and transportation and whether there should be a single transit authority across the entire GTA.

This allows Chris Ballard to embark on a long answer taking in GO trains, 15 minute train services and the new station at Mulock Drive. Christine says the PCs are going to spend $5 billion on something or other and, yes, parking is a problem.

“Bringing everything under one roof is something that Andrea will be looking at.” 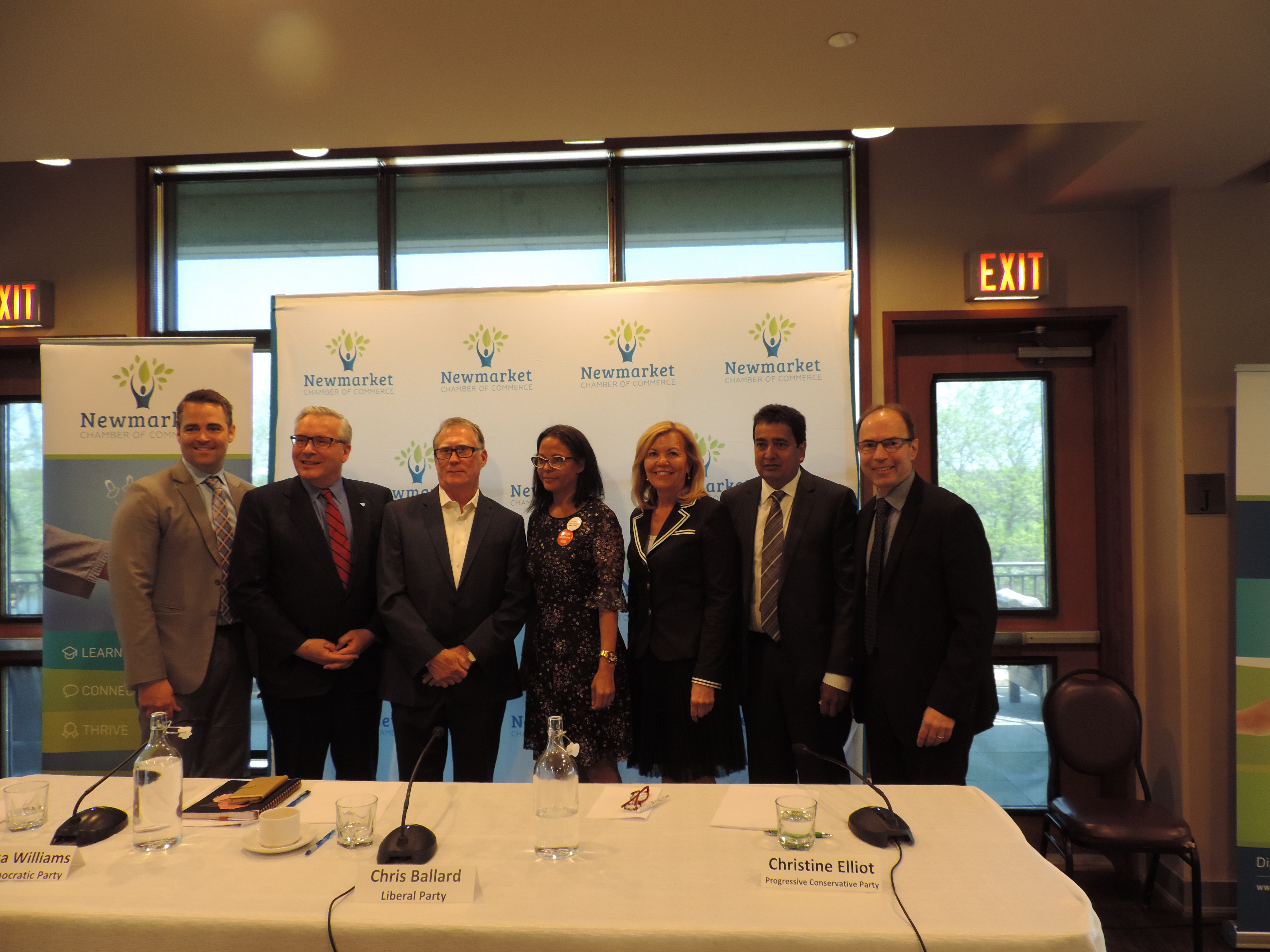 If Melissa is stumped for an answer we know that Andrea will be looking into it.

Unbelievably, we are back to hydro yet again.

Now we are into the closing statements with Melissa promising a touchy-feely NDP where everyone in Ontario can feel at home and cared for.

Chris Ballard, the man with the ever-present smile, says:

“I’m not happy until the folks in Newmarket-Aurora are happy!”

Christine Elliott says we are not getting the best value out of our health care dollars (those efficiency savings again) and that she lies awake in bed at night worrying about the deficit. (I made the last bit up.)

Oh, yes. And she tells us the PCs will be producing a fully costed platform before the election.