Now we can get a full frontal in-your-face view of the Monster House at 1011 Elgin Street.

On Monday (2 April) the tree inconveniently situated in front of the house was chopped down on the orders of the owner, Morad Dadgar.

It is clear beyond any argument that the Town has signally failed to protect the neighbourhood from this towering structure which now dominates the street. It even has LED lights under the eaves so we can expect the exterior to be floodlit at the flick of a switch any time the owner chooses.

At last week’s Council Workshop on “intensification in stable residential areas” (26 March 2018) councillors considered possible new approaches to the Town’s Zoning By-laws that would offer some kind of protection to existing residents.

The longest serving councillor in Canada, the inquisitive Dave Kerwin, innocently asks Senior Planner, Dave Ruggle, if another giant house could be built alongside 1011 Elgin.

The Town’s zoning by-laws are so useless that there is nothing to stop Mr Dadgar or one of his relatives from tearing down the bungalow next door - which they also own - and building Monster House 2.

Kerwin’s colleague and Council jewel, Bob Kwapeese, is concerned about what may happen across the Town between now and when any new Zoning By-law regime is brought it. He says there is already a rush to sever lots to squeeze in more new developments. Dave Ruggle says if the Council wants to stop any development it could issue an “Interim Control By-law”.

Oh no no! says Van Trappist, the developer’s friend.

“That would be the nuclear bomb option!”

If a Monster House was gonna be his next door neighbour in London Road the old banker’s finger would already be hovering over the nuclear button.

A long list of councillors line up to express regret or concern about 1011 Elgin Street and its impact on the neighbourhood. Ward councillor Jane Twinney says it doesn’t fit in.  John Taylor says it boggles the mind that the Monster House occupies less than 35% of the total lot area – as required by the Zoning By-law.

Tom Vegh talks fancifully about infill development as an “emerging issue”. As if the Town is cleverly taking steps to address a problem which is only now manifesting itself. Complete baloney! This was an issue the rest of us – including the Director of Planning in 2012 - could see coming.

Christina Bisanz talks of protecting the character of residential areas. She hopes this protection will not just apply to neighbourhoods of her vintage or older! She makes the case for protecting newer neighbourhoods from inappropriate infill.

We are told that within 60 days the planners will be ready to present a report to Council on how best to tighten up the Zoning By-laws to stop developments like 1011 Elgin from blighting entire neighbourhoods.

Taking it all on trust. 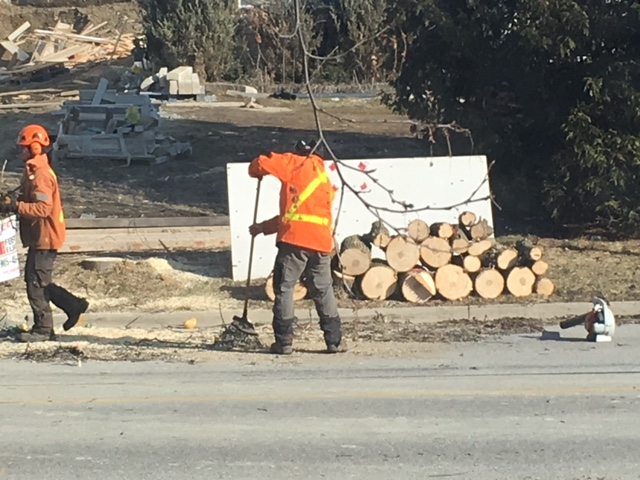 Councillors are told by the planners that 1011 Elgin Street meets the Zoning standards and we take that on trust. We still haven’t seen the height and the lot coverage independently verified by a qualified Ontario surveyor but that’s not going to happen unless councillors insist on it. It’s not on the cards.

Ages ago the Director of Planning, Rick Nethery, asked the owner, Morad Dadgar, to let the Town have sight of the property survey but he, Nethery, was ignored.

If not, we would have been told about it.

As it is, no-one takes responsibility for the Monster House at 1011 Elgin Street.

It’s just one of those things.