OMB prehearing on the Clock Tower was misled

Ira Kagan, the lawyer acting for Clock Tower developer, Bob Forrest, told the OMB prehearing on 3 May 2017 that there was no difference "from the outside" between Forrest's original application and Option B.

Kagan's statement, made without any qualification, was untrue. There are significant differences between the original and Option B.

Compare the plans for the Market Square side of the proposed development. The plan shown at the top is from the original application. The plan below is from Option B.

Forrest's original application (resubmitted in April 2016) was for a seven storey building with 165 apartments and 199 parking spaces with underground parking extending under Town-owned land.

Option B which was sprung on everyone on the day of the OMB prehearing proposed 143 rental units and 177 parking spaces - all on Forrest's own land. (The Town's counsel, Leo Longo, was told about Option B on Monday evening, 1st May 2017 - less than 48 hours before the prehearing.) Forrest now intends to build entirely within his property line.

At the prehearing I was given a sheaf of drawings for the new Option B but one key elevation was missing. The view of the Clock Tower development from Market Square. Yesterday, I emailed Kagan with the question:

"There was no artist's impression or elevation for the proposed development as seen from Market Square. Is this available?"

"No. I gave you all that was available."

When Kagan assured the OMB adjudicator, Blair Taylor, that even with the loss of the Town-owned land required for the underground car park, the development looked the same from the outside, he must have been relying on information from his client, Bob Forrest. I am certain Kagan would never knowingly mislead the OMB. 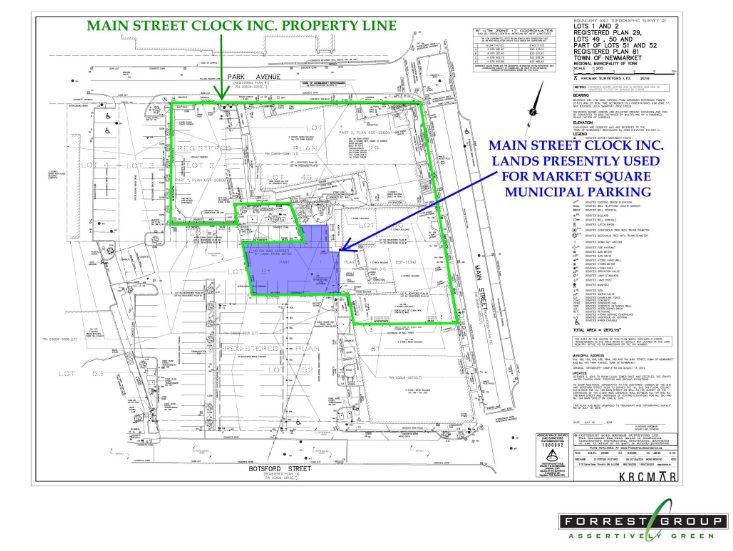 Why is this important?

Bizarrely, the OMB has two applications before it. The original application which is under appeal and Option B which is being sold as a minor variation of the original. This strains our credulity.

If Option B is an entirely different beast from the original - and it is - then the OMB should not even consider it. It should instead adjudicate on the original which everyone now knows cannot be built. If the OMB presses ahead with a series of Hearings on a building that cannot be built then, truly, we have entered Fantasyland.

In a delicious irony, and to the best of my knowledge, we do not have a transcript or an audio recording of the OMB prehearing on 3 May 2017 but perhaps Mr Kagan can tell us what he said or what he meant to say if he "mis-spoke". The Council Chamber was packed and I am prepared to bet people heard what I heard.

My hunch is the revised Clock Tower is still work in progress. If it is not then Forrest should make all the plans, drawings and supporting statements available to the Clock Tower Parties immediately. And he should brief his counsel, Ira Kagan, comprehensively and honestly, holding nothing back.

In the meantime, the Town should formally request the OMB to dismiss Forrest's appeal without a hearing.

On 28 November 2016, after the Committee took its decision to deny the Clock Tower application, Bob Forrest told councillors:

"We have informally shared with Planning Staff that we have found the means to re-design the underground so that it does not extend under the Newmarket Library parking. This revised configuration, which was accomplished as to reduce our construction impact upon Library operations, is to be presented as part of a Site Plan Application."

Earlier today, I wrote to the Town to ask for sight of any elevations or artist's renditions of the revised Clock Tower development (as referred to above) as seen from Market Square.