This morning (Wednesday 3 May) Bob Forrest presented to the OMB prehearing new plans for his Clock Tower development. The Town's counsel, Leo Longo, received them on Monday evening (1 May). The rest of us saw them for the first time a few hours ago. The drawings, plans and elevations are all dated 1 May 2017. The ink is still not dry.  (See right and below.) 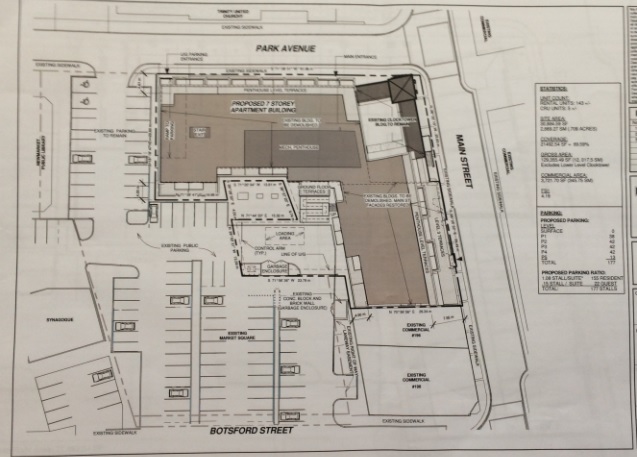 Forrest's lawyer, Ira Kagan, told the OMB that the application under appeal was never going to work as the Town was not prepared to enter into a land swap. Kagan said there was "tacit consent" to a land swap dating from June 2013.

He said the land swap was conditional on Forrest getting approval for his development which, of course, never happened. The Town rejected the Clock Tower development on 5 December 2016.

Instead of this being the end of the matter, Kagan conjured an "Option B" out of thin air.

The original application under appeal to the OMB is still on the table but it is not going anywhere as it cannot be built without Town owned land.

With Option B, Forrest builds his Clock Tower development entirely within his own property line, on the footprint of his own land. As a result, it is a grotesque overdevelopment.

It has a Floor Space Index of 4.19 giving it the highest density of any building in Newmarket. 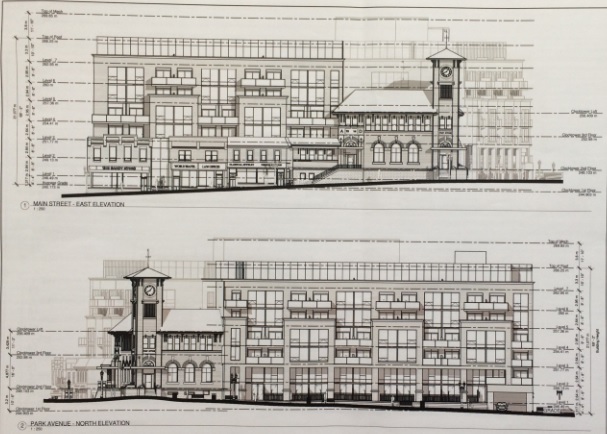 Forrest has swung back to rental from condo and says there will be 143 rental units. There will be 5 commercial retail units all serviced from Main Street South and not from the rear of the property as is recommended in the Town's Official Plan. Bad planning, I'd say.

There will be underground parking for 177 vehicles going down 5 levels. Back in February 2014, at the first Statutory meeting, Forrest's loyal lieutenant, Chris Bobyk told us that for technical reasons the underground car park couldn't be built solely on the land that Forrest owns. It would mean going down to four levels and that is way too deep. The soil is too wet. That's why they needed Town owned land - the parking garage wouldn't go down too deep and "spread out".

The view from the Old Town Hall is garbage

Directly opposite the Old Town Hall will be the development's garbage enclosure. What a charming prospect!

The Town's jolly counsel, bearded Leo Longo, tells us the Town will not support its own lands being used for underground parking. He says he is prepared to accept, on Kagan's word, that Option B looks much like the original application.

But, at some stage, the OMB will have to decide what it is being asked to decide on. It cannot have two alternatives before it - the original Option A and the new Option B.

No back up studies

Forrest has introduced at the 11th hour a set of drawings with no back up studies whatsoever. And, significantly, no Planning Rationale Report. How is it possible to take a view on the latest proposal without key background information? Will the public be consulted? If not why not? Option B is, in effect, a new application rather than a tweaked revision of an earlier one. The parking changes alone are huge.

What Forrest is doing is a clear abuse of process.

But who is going to call him out if not the OMB itself?

19 people will appear at the OMB Hearing as Participants.

Meaning of Tacit as in Tacit Consent:

Silent; not expressed; implied or inferred; manifested by the refraining from contradiction or objection; inferred from the situation and circumstances, in the absence of express matter. Thus tacit consent is consent inferred from the fact that the party kept silence when he had an opportunity to forbid or refuse. (Black's Law Dictionary)