Bob Forrest's Clock Tower and the OMB: How did we get here?

Read this first. The OMB prehearing on Bob Forrest's Clock Tower development will be held at 10am on Wednesday 3 May 2017 in the Council Chamber at 395 Mulock Drive, Newmarket. Here is a condensed Reader's Digest version explaining how we got here. Forrest's OMB Appeal will throw up a million issues, many of the more important are not even touched on in this

blog. Over the coming days I shall look at the issues, one by one, that will take centre stage.

The Background: The developer, Bob Forrest, sought a Zoning By-law amendment to allow him to build a seven storey apartment building around the Clock Tower - the old Federal Post Office on Main Street South which is designated. Three historic commercial buildings south of the Clock Tower also in Forrest's ownership would be demolished with their facades preserved, if possible. The proposed development lies in the very heart of the Town's Heritage Conservation District.

The application was considered by councillors at a Committee of the Whole on 28 November 2016 when it was denied. An alternative, proposed by the Town's planning staff, was not supported by Forrest nor by councillors and it too was rejected.

These decisions were ratified by the full Council at a meeting on 5 December 2016 following which Forrest appealed to the Ontario Municipal Board.

The Town's Newmarket Heritage Advisory Committee, ably led by Athol Hart, is "adamantly" opposed. So too is the BIA (Business Improvement Area) which represents businesses in the historic downtown.  (The photo below shows Main Street in the 1950s) 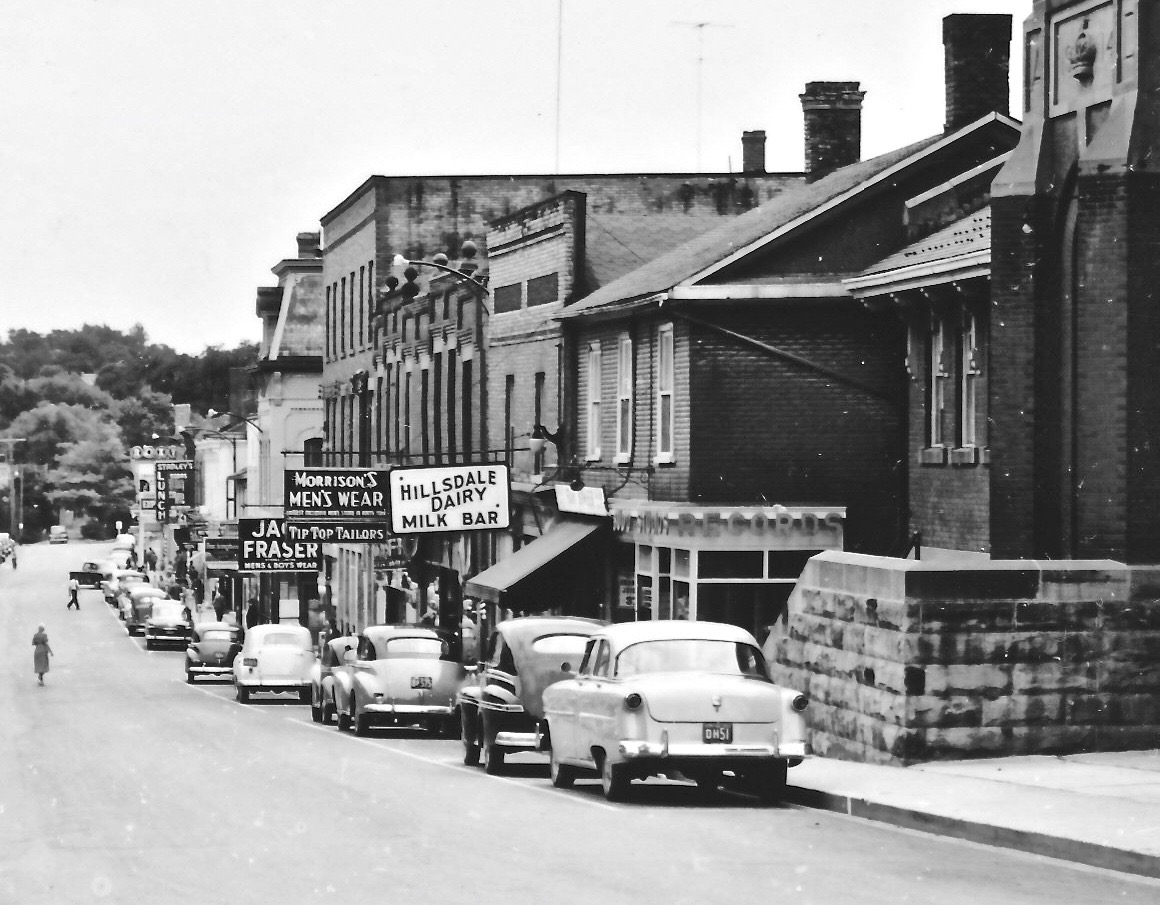 The Clock Tower application has morphed through three distinct iterations - nine storeys then six and now seven. In every case the development could only proceed with Town-owned land being made available to the applicant.

Forrest claims an "agreement in principle" was entered into with the Town which would allow him to use Town land for his underground car park. Without this, his project, quite literally, could not get off the ground.

Parking in the old downtown has always been an issue and as far back as 2003 the Town had a Market Square "project" which would look at parking infrastructure and how it could be improved. It was against this background that Forrest put out feelers to the Town once he had acquired the Clock Town building in early 2011. He subsequently purchased the historic commercial buildings to the south of the Clock Tower and with them the rights to a small area of surface parking in Market Square.

Forrest believed he could kill two birds with one stone. He would do a land swap, exchanging his small parcel of surface land on Market Square for a much larger Town owned space under Market Square where he could locate the underground parking his development needed.

The developer held out the possibility of allocating some of this space for public parking. This was seen by senior Town staff and at least some councillors as a win-win. In the event, the public parking element proved to be a non-starter when the developer made it clear he was seeking $30,000 from the Town for every space.

Although the idea of the land swap has been in the public domain for years - and is available for all to see in the plans and drawings related to the proposed development - the details of the so-called agreement in principle have never been published by the Town.

Forrest's proposed development in the heart of the Heritage Conservation District would have had a Floor Space Index of 4.27 (one of the highest densities in the whole of Newmarket) but was massaged down to 2.9 when the Town-owned underground land was factored in. These calculations were never made available to the public.

It was only in December of last year, seven months after the issue had been raised at the Statutory public meeting, that Town staff eventually conceded what we had long known - that the development's FSI was derived by using underground space not in Forrest's ownership.

The FSI for new developments in the Heritage Conservation District is 1.0 and there is a three storey height cap. Manipulating the FSI in this way directly influenced the nature of the development's built form.

Forrest sought to get all his ducks lined up in a row before formally submitting his application to the Town. Over a lengthy period, he got close to people and Town staff whom he thought could help him. As his development gestated and mutated, he worked at building support through his community "ambassadors" and "teams".

He and his senior colleague, Chris Bobyk, had one-to-one meetings with councillors reporting back to the Mayor, Tony Van Bynen, and to the Town's Chief Administrative Officer, Bob Shelton, on their views and what was said.

The Mayor became one of Forrest's staunchest supporters, declaring to the local press in April last year that the Clock Tower was just the kind of intensification the historic downtown needed. Fortunately, despite his enthusiasm, he could not take his councillor colleagues with him and in November 2016 - just before the crucial vote - the Deputy Mayor, John Taylor, wrote in his blog that he would not and could not support a seven storey development. He said:

"It is simply too large for the site and for the Heritage Conservation District."

In the event, the Mayor voted against the Forrest application on 28 November 2016, preferring to support the Staff compromise. This proposed restricting the height on Main Street to five storeys including step-backs and 7 storeys on Park Avenue, again including step-backs. 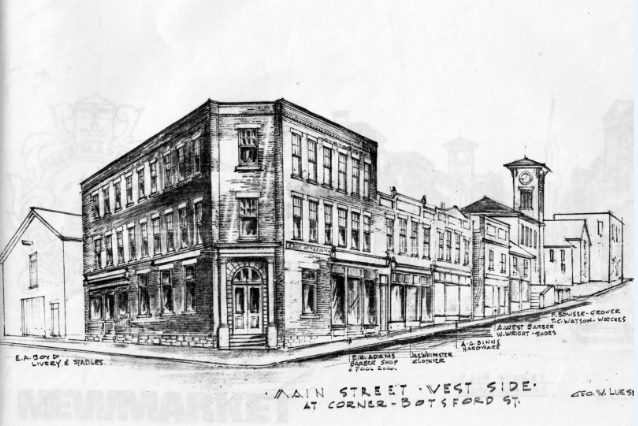 The Mayor was left isolated and councillors voted both down.

On 5 December 2016, Newmarket Council confirmed its decision to deny the Forrest application for the following reason:

"The development of the subject lands as proposed would adversely impact the character of the established neighbourhood and adjacent properties within the Heritage Conservation District."

This triggered Forrest's appeal to the OMB.

(The sketch above is by George Luesby showing the west side of Main Street around 1920.)

"It is fair to say that Town Staff's most important issue (policy and otherwise) is heritage."

He goes on to say:

It is this contention that will be tested at the OMB.