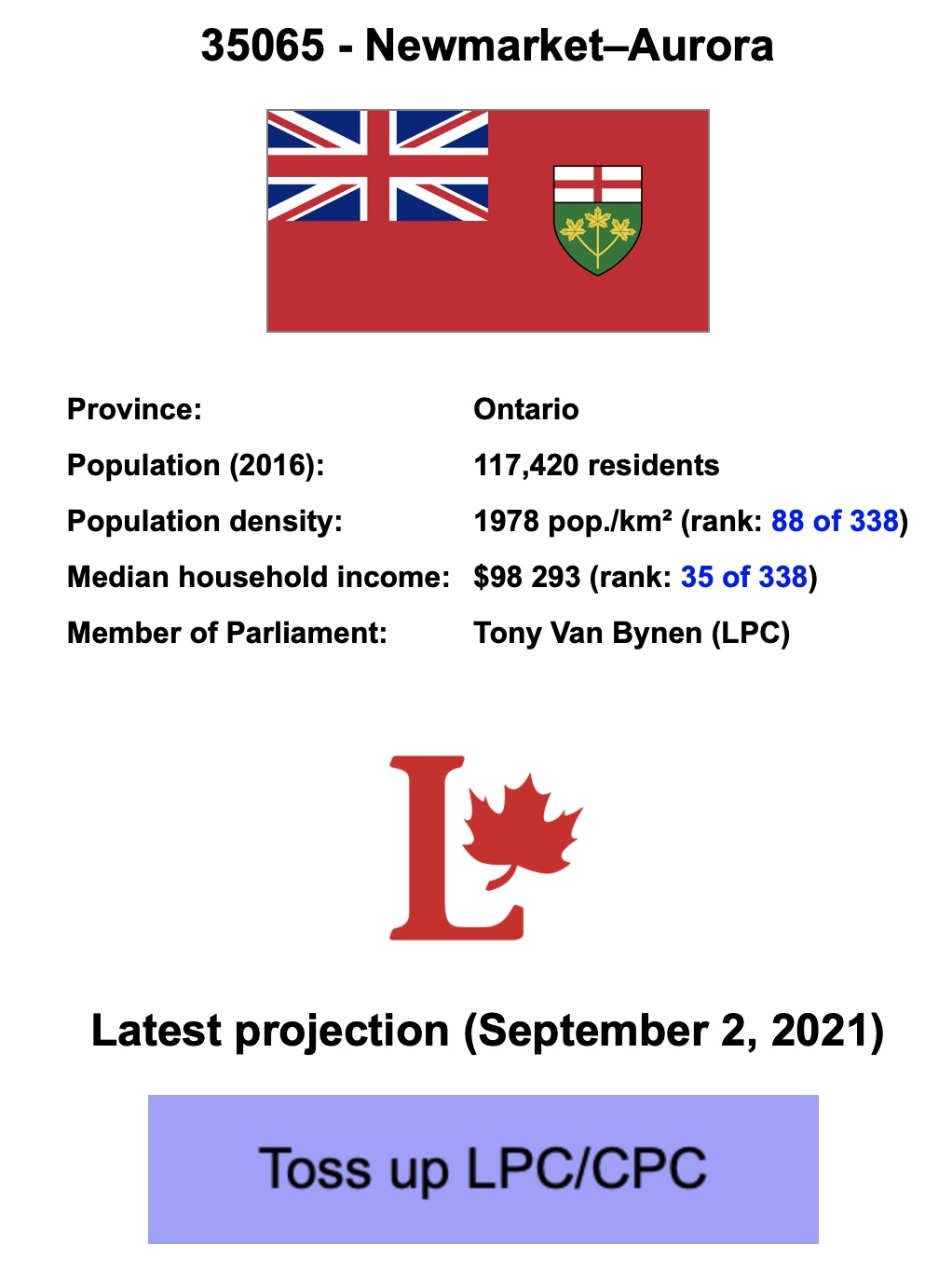 Elections Canada has now confirmed there will be six candidates running in the Federal Election in Newmarket-Aurora.

The indefatigable Dorian Baxter has, once again, thrown his hat into the ring. And Andre Gagnon is the new People’s Party candidate, replacing Lana Morgan who filled that role for a bit more than two weeks.

Generally speaking, Newmarket-Aurora is a prosperous place but with pockets of deprivation and poverty. The median household income is $98,293 ranking it 35 out of Canada’s 338 ridings.

The latest polls say the riding is a toss-up between the Conservatives and Liberals. Of course, much can change between now and 10 September when advance voting begins but, as I tap this out, it looks too close to call.

Yesterday, the polling aggregator 338Canada.com put the odds of the Conservatives winning Newmarket-Aurora at 69%, the Liberals at 31%

The key to winning an election is to (a) identify where support lies and (b) get those supporters out to vote. At the last election in 2019, 67.3% of people on the electoral roll voted, a smidgeon more than the national average of 67%.

Getting out the vote

Persuading the non-voters to turn out can make the difference in a tight race but this is easier said than done.

Political parties look at past results as a guide to the future. But this has obvious limitations. The way people in Newmarket-Aurora voted on 21 October 2019 is no guarantee they will vote the same way in 2021. All the more so when 75% of the electorate say they believe this is an unnecessary election.

Pundits and commentators tell us to expect an increase in advance voting and in mail-in ballots. The available evidence suggests that those who vote earlier tend to be more fixed in their political affiliation.

The maps below show the voting on polling day on 21 October 2019. I have used the riding map of Newmarket-Aurora, produced by Elections Canada, as a template as is shows the boundaries of each polling district (the smallest unit for which figures are available). Each polling district is then colour-coded to show the level of support for the four main political parties. The voting data on which I rely is from Elections Canada.

What do the maps tells us?

The Liberal vote is fairly evenly spread across the riding, but preponderately on the West side of Bayview Avenue.

The Conservative heartland is in Aurora, notably in the southeast corner around the Frank Stronach properties. A high Conservative vote is more likely outside the urban core. The centre of Newmarket is not strong Conservative territory, nor are the main corridors.

The NDP vote is strongly concentrated in Newmarket and along the major corridors. The Green vote too is stronger in urban Newmarket but there is an even spread across the riding.

There are also mobile polls which visit residential homes and care centres. The data shows high turnout (sometimes very high) at these locations. The political parties generally make these places a priority. Older people are more likely to vote than those in their teens and twenties.

Last night we saw the first French language debate between the Party leaders (other than the Greens who have no seats in Quebec). The commentators say there was no knock-out blow and they all, more or less, held their own.

But the momentum is clearly with the opposition parties.

The idea has now taken root that this is an unnecessary election.

Maybe this will change in the seven days before people start voting in the advance polls.

But if it doesn’t, the Liberals are toast.

Liberal support in Newmarket-Aurora in the last Federal Election on Polling Day, 21 October 2019 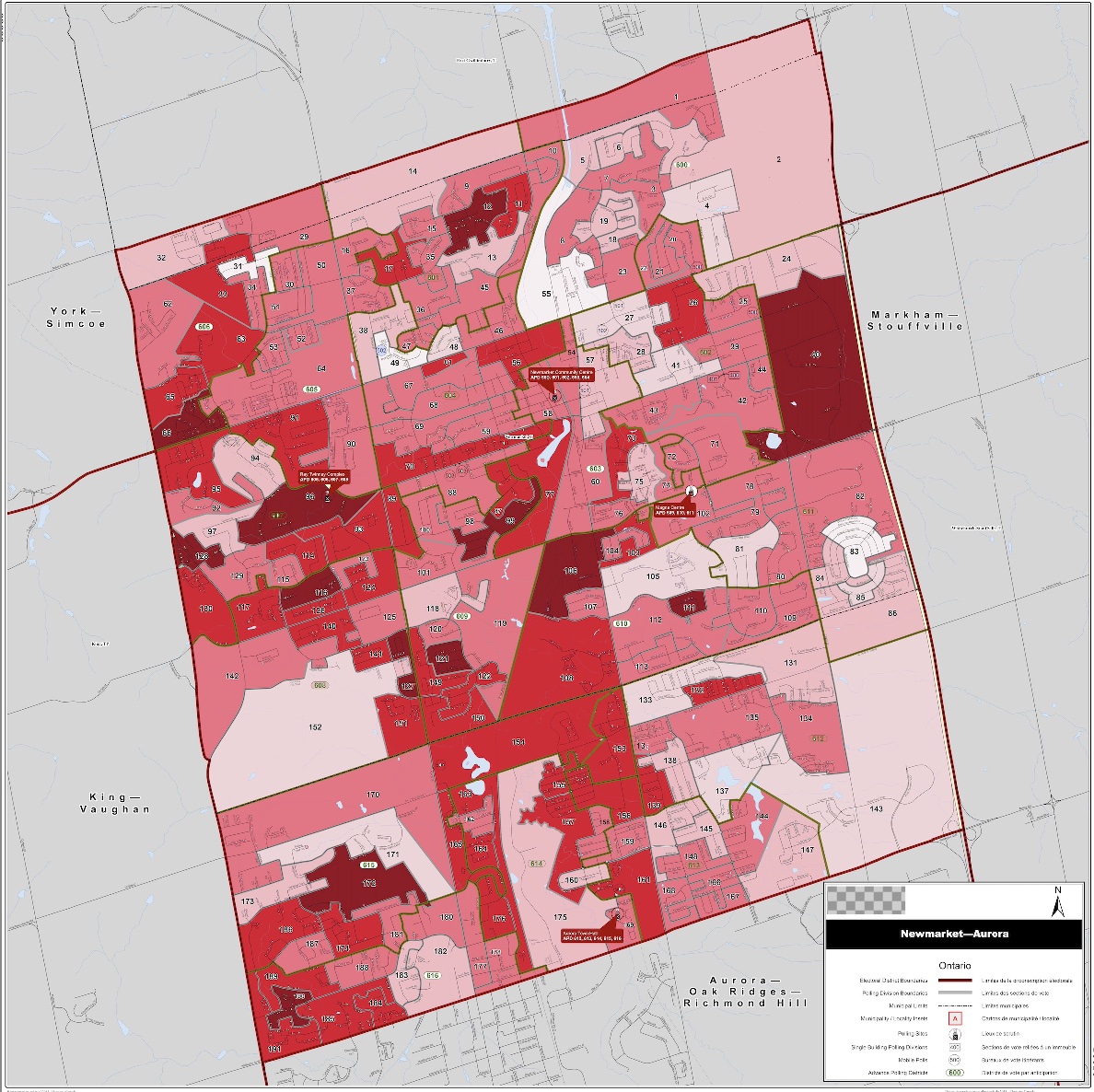 over 50% of those who voted on Polling Day voted Liberal

Conservative support in Newmarket-Aurora in the last Federal Election on Polling Day, 21 October 2019 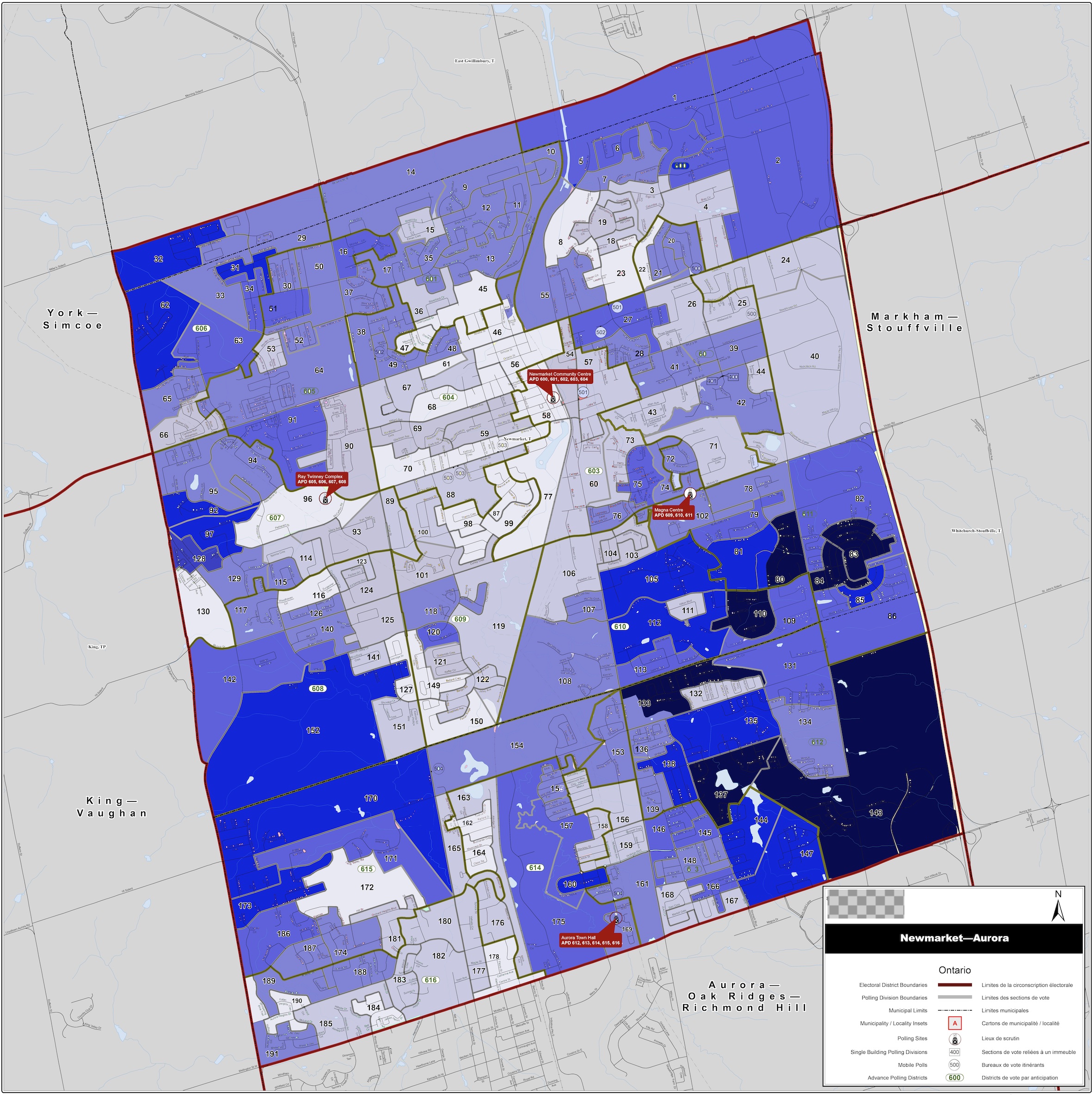 over 50% of those who voted on Polling Day voted Conservative

NDP support in Newmarket-Aurora in the last Federal Election on Polling Day, 21 October 2019 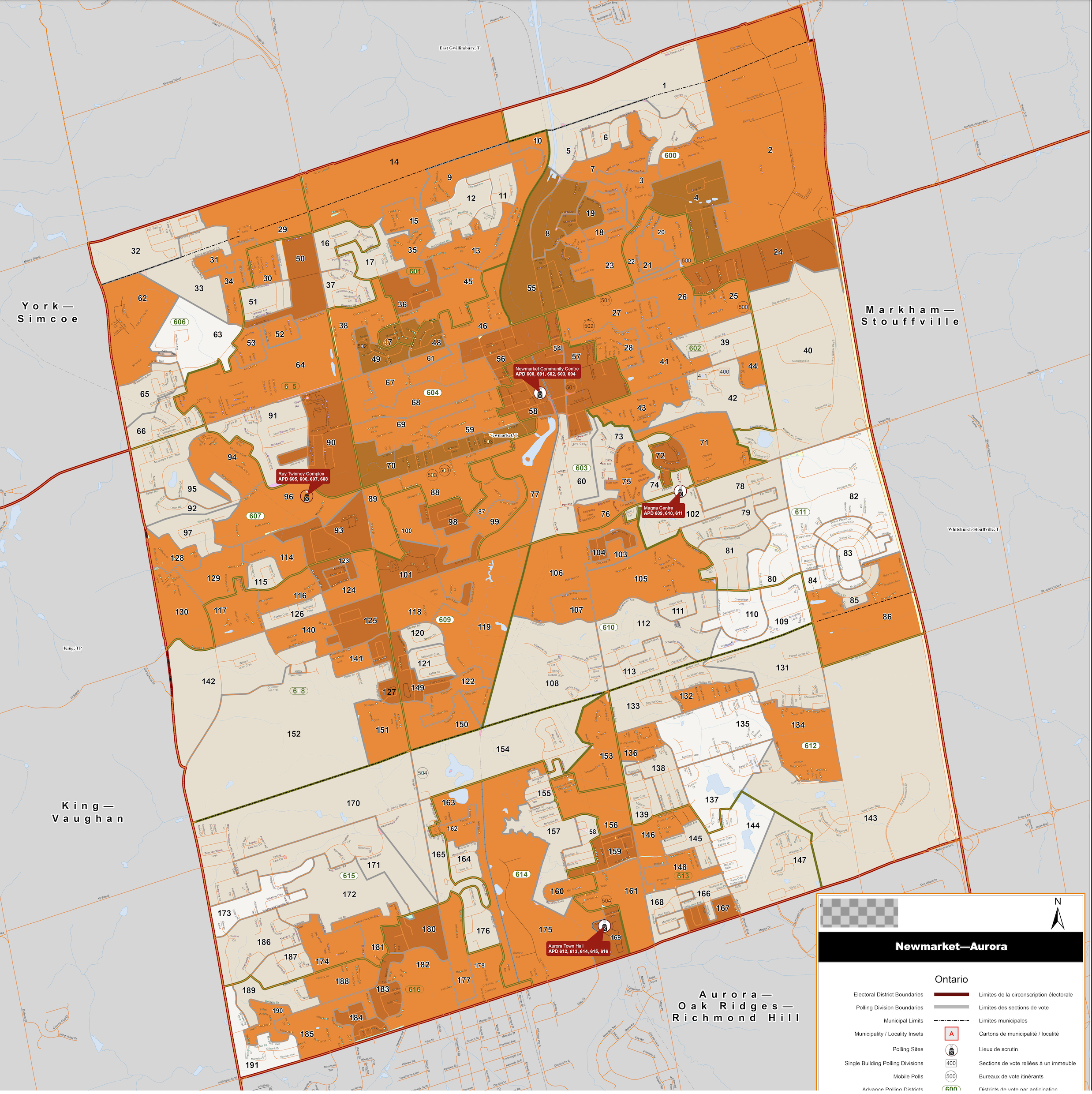 Green support in Newmarket-Aurora in the last Federal Election on Polling Day, 21 October 2019 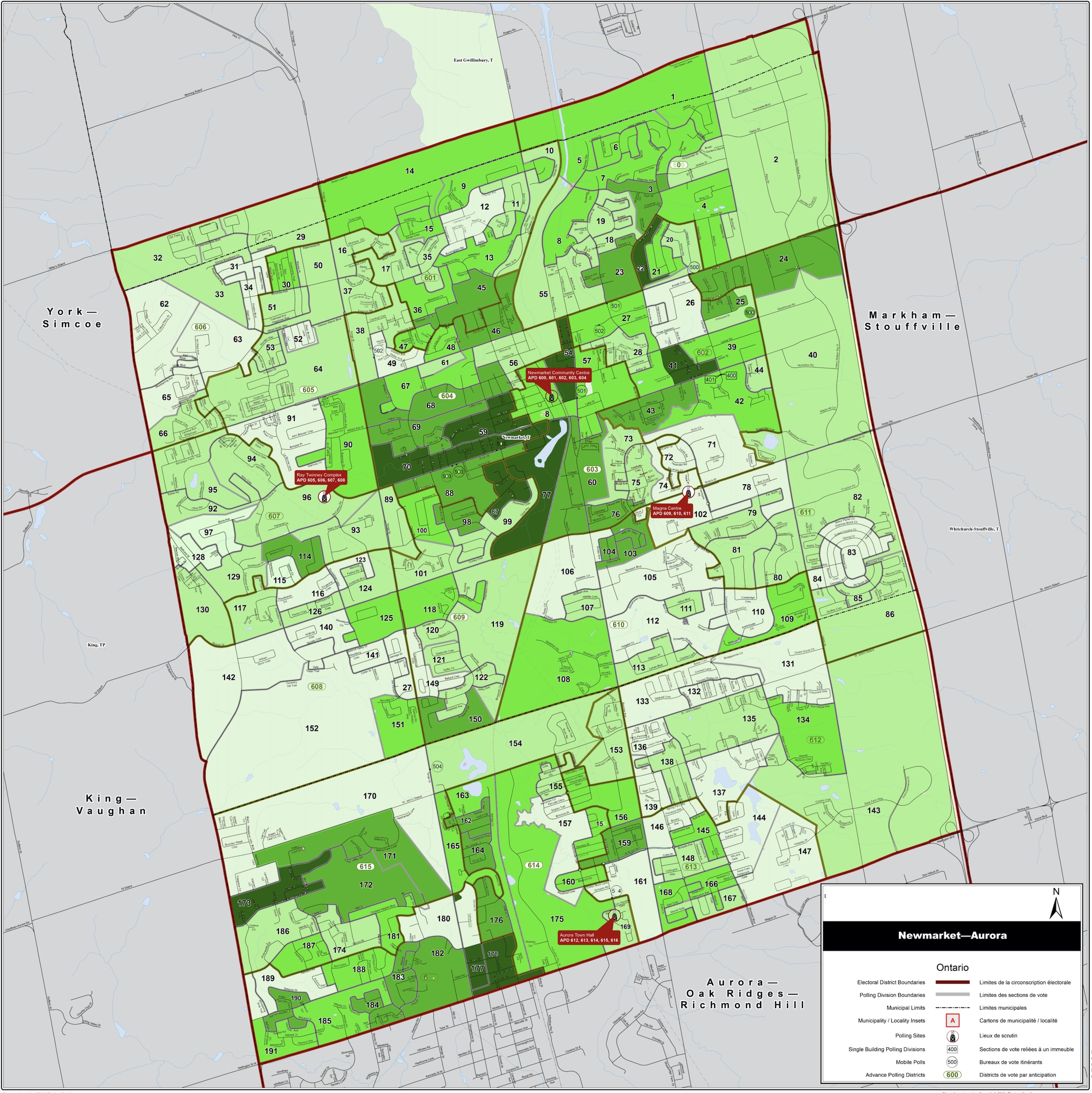