It is just over a year since the last Federal Election on 21 October 2019 and our new MP for Newmarket-Aurora has had time to get his feet under the table. How is he doing? 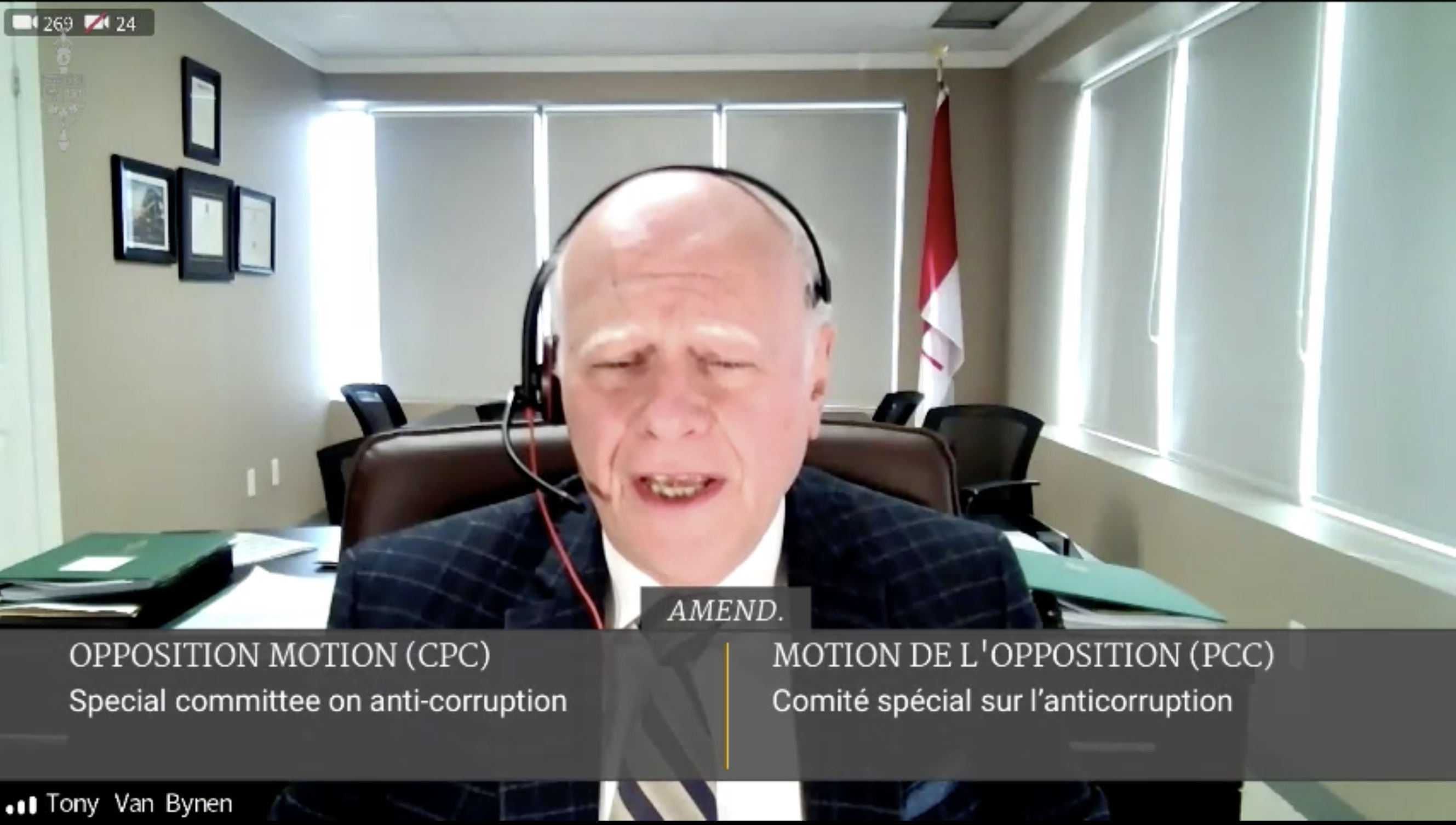 Pretty much as I expected.

Van Bynen, at 69, was the oldest of the new intake of 91 rookie MPs. He is a loyal foot soldier and is never going to step out of line. (Photo right: last week, voting virtually from his Bayview Ave office)

Until the pandemic struck he was in the bottom 5% of rookie MPs in terms of interventions in the House of Commons. (My figures are from 8 March 2020) He took a while to find his feet.

Of course, the number of speeches an MP makes in the Chamber is no guide to their quality.

In the House of Commons as elsewhere Van Bynen always reads his speeches from a prepared text – even when they are very short, no more than a minute or two. For someone who has been in the public eye for years this has always surprised me.

In the first of his four micro speeches on 11 December 2019 he thanked people for electing him and focussed on his priorities:

I have heard very clearly that our community is concerned about climate change, affordable housing, infrastructure funding, health care and a need for a long-term fiscal plan, but not at the expense of creating a social deficit. These things will by my priorities during the upcoming term.

He told the media that preserving local heritage would also be a priority but we’ve heard nothing from him about that. He has been silent on the unlawful demolition of the Simpson Building on Main Street by his friend Bob Forrest.

When he went to the photo-shoot at Deerfield in August, we learn that the promised “affordable housing” has now morphed into “attainable housing”. Whatever that means.

The importance of hugging

The Benefits of Retirement

2019 was a very good year for Tony Van Bynen, the retired Mayor of Newmarket. In January 2019, he received the second tranche of the $162,739 of taxpayers’ money designed to cushion his voluntary retirement from municipal politics. He kept quiet about that second tranche for as long as he could. He then joined the Liberal Party after hearing that Kyle Peterson, the then Liberal MP, was standing down. No-one else threw their hat into the ring and Van Bynen probably surprised himself by becoming the official Liberal candidate without a contest. And in the Federal Election in October he landed on his feet, taking 42% of the vote. The Liberals nationwide got support from 33.1% of Canadian voters - the lowest share of the popular vote in modern Canadian history. 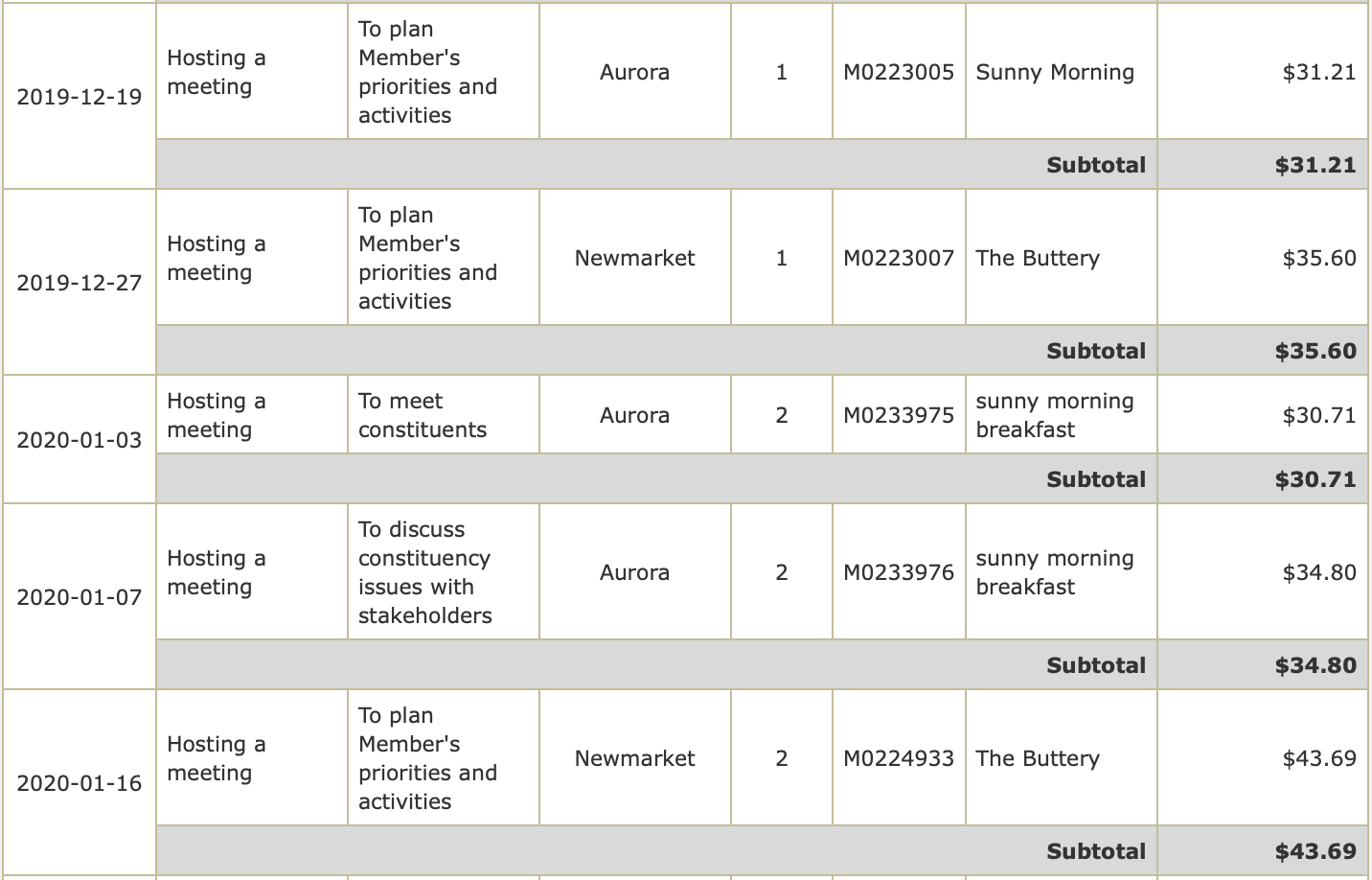 Dining out on our dollar (again)

In the early months after his election while he was getting to know the ropes he was billing taxpayers for breakfasts at the Buttery and elsewhere. It was just like old times. He holds meetings over bacon and eggs to “plan his priorities” and we pick up the tab. At least he did until the pandemic struck. In recent months he has stopped billing us for his breakfasts.

Van Bynen sits on the Health Committee and he has a slot at every meeting to ask his pre-prepared questions. To my mind, they are all pretty softball. He is not the type of politician who wants to generate controversy. He says he dislikes “partisanship”. When others agree with him that means they want to get things done. When they disagree with him they are playing “partisan games".

In an interview with Newmarket Today on 25 September 2020 about the Throne Speech he trilled:

“We’ve learned during a time of crisis, partisanship falls to the wayside and everybody focuses on what’s right and what’s best for our shared constituencies… Everybody is focused on finding the best solutions.”

But that changed when the Conservatives, the Bloc and the NDP wanted a say in setting the agenda for forthcoming meetings of the Health Committee - it is a minority Parliament after all. (An election is off the cards for the moment but I doubt we shall have to wait another three years.)

The Opposition Parties want the Health Committee to focus on a range of matters such as vaccine development, Canada’s level of preparedness in responding to another pandemic and the availability of PPE equipment.  There will be a vote in the Chamber of the House of Commons tomorrow (Monday 26 October 2020) to decide the Committee's work programme. 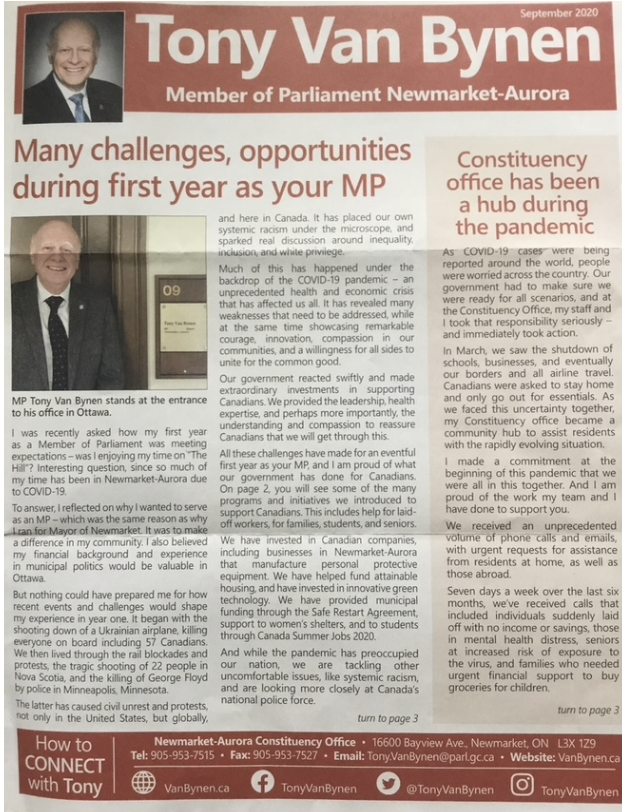 Speaking in the House of Commons virtually, from his constituency office in Bayview Avenue, Van Bynen makes it clear he wants the Committee to focus primarily on mental health:

“I am frustrated and disappointed in the Conservatives' new approach on the health committee. We did not always agree before, but it was always clear that everyone on the committee had a common goal to be productive rather than play partisan games.”

Mental health is a big issue and it is laudable that Van Bynen is running with that particular ball. But that doesn't mean that vaccine development, the crisis in long-term care and all those other big issues identified by all the opposition parties are secondary and have to go to the back of the queue for discussion and debate in the Health Committee.

Personally, I would have forgiven a lot of Van Bynen’s politics (which are light years away from my own) if he had just stuck with a few principled positions. But his endless shape-shifting and weaselly evasions leave me cold.

In a virtual Town Hall with local members of the Liberal Party on 15 October 2020 he couldn’t or wouldn’t express an opinion on the planned cutbacks in the number of Registered Nurses at Southlake. That, he says, is a matter for the CEO Arden Krystal.

On the epidemic of gun violence he parrots the official line, telling his on-line viewers that the Government would allow municipalities to decide on handguns and where they should be stored. Oh dear! Before the election he said private individuals shouldn’t have handguns, a position he has now abandoned. And we get this drivel from Van Bynen at the same time the Chief of York Regional Police is telling the Regional Council that shooting incidents across the Region have gone up from 4 in 2015 to 57 in 2019.

It’s difficult not to feel a little disappointed in Tony Van Bynen MP.

He is furiously active on social media, endlessly tweeting and re-tweeting the latest Government line from Ottawa.

Yet he is predictably silent on many of the things that really matter.

Update on 26 October 2020: The House of Commons today instructed the Health Committee to undertake a study on the emergency situation facing Canadians in light of the second wave of the Covid 19 pandemic etc etc. The Liberals (including Van Bynen) voted against the motion and the Opposition parties won 176 votes to 152 votes.

Update on 28 October 2020: Last week the Liberal Government took the view that a motion from the Conservatives instructing a Committee to investigate the WE charity affair was a vote of non-confidence in the Government. The Government survived the vote on 21 October 2020 by 180-146 with the NDP, Greens and Independents voting with the Liberals. But another Conservative motion on 26 October 2020 (see update above) instructing the Health Committee to investigate further the Covid pandemic - with extensive powers to call for papers and witness - was not deemed to be a vote of non-confidence.  Andrew Coyne in the Globe and Mail says Parliament should decide, not the Government, what constitutes a non-confidence vote. In the UK House of Commons a motion tabled in this form: "That this House has no confidence in Her Majesty's Government" is always taken as first item of business on the next sitting day.