Newmarket Mayor, John Taylor, has confirmed he wants to see a full rebuild of the Simpson building at 184-186 Main Street South which was unlawfully demolished on 9 October by developer Bob Forrest. 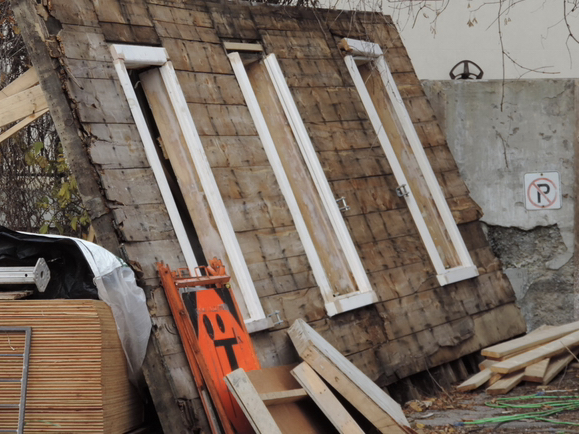 The Mayor says this is his goal “at this point”.

In an article on Monday (4 November 2019) Newmarket Today told us the Forrest properties on Main Street were up for sale and the listing would be handled by local realtors Joshua Campbell and Graham Purvis.

“According to Campbell, the façade of the Simpson building was saved in the demolition, as had been required by the Town.”

Taylor says it is his understanding that the façade was removed weeks, maybe more, prior to the demolition.

“It was removed and saved to be replaced when all other work was complete. Saving the façade was a requirement of the Town but not as part of a demolition.”

So, where is the saved façade?

There is something that looks like part of the old Simpson building propped up at the rear, in Market Square. (Photo right) Is that it?

The Mayor told me:

“The façade has been saved and is at the rear of the building and I believe it has now been tarped at the request of the town.”

“The Town’s heritage expert and the Main Street Clock Inc (Forrest’s company) heritage expert will work together to prepare a mutually agreeable recommendation on the Main Street Building facades for consideration by the Town. Approval of the heritage facades for the MSCI Lands will follow the regular process required by legislation with the intention that the Town accept the expert recommendations.” 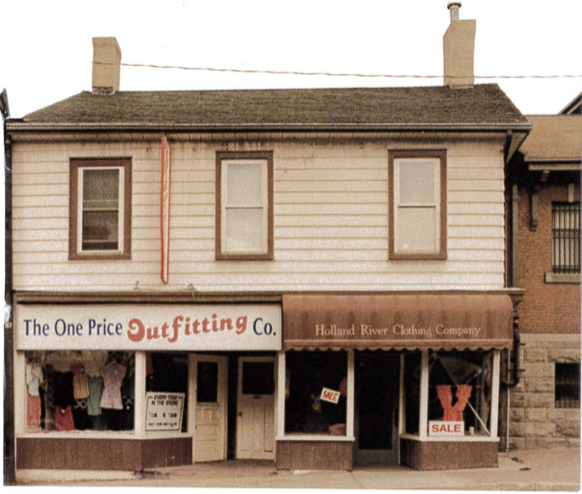 “The Town will work within its authority to assist MSCI and its neighbours with façade improvements, including, in particular, property standards issues.”

Eye off the Ball

After the Town and Forrest signed their agreement in May last year, I rather took my eye off the ball. Like everyone else, I assumed that the project as agreed would move quietly and seamlessly forward to its conclusion. I did not imagine for one moment we would see the brazen unlawful demolition of one of the Town’s most historic properties.

But with Forrest it is a mug’s game to make those kinds of assumptions. We learned on Monday he was listing his properties for sale.  Earlier, in April 2019, the Town’s solicitor said a sale could, but not necessarily, give rise to complications.

In June the Town’s Committee of Adjustment agreed to Forrest’s request to divide up his properties into legally separate parcels of land to facilitate their sale.

In a further twist, the realtors' "Landmark on Main" website tells us further details on the site of the demolished 184-186 Main Street South will be "coming soon".

At this week’s meeting of the Newmarket Heritage Advisory Committee, senior planner, Adrian Cammaert, was sitting in for the Town’s former heritage planner, Dave Ruggle, who has moved on the Lake Simcoe Conservation Authority.

184-186 Main Street South was on the agenda (which drew a small audience including me) but there was no written report. The senior planner told members there was no update beyond that released by the Town on 21 October. This produced no reaction whatsoever from Committee members who appeared to have been secretly lobotomised. They needed the institutional memory of the former Chair, Athol Hart.

The removal of the façade and what had happened to it was big news to me – even if was old news to members of the Advisory Committee.

Who authorised the removal? What checks were done to ensure the removal would not compromise the integrity of the rest of the building? When did the removal take place? Where was the salvaged wood to be stored?

Forrest’s 2016 Heritage Impact Assessment told us the original materials of the wood frame building at 184 Main Street South could be salvaged and retained as part of the reconstruction.

The March 2019 report on the conservation plan for the historic properties in Forrest’s ownership had this to say about 184-186 Main Street South:

“The internal assembly and condition of the sloped roof at Building 184/186 was not assessed due to limited access during our site visit. The building was re-roofed within the last several years. It can be assured that any deteriorated wood, along with most original materials, were replaced during the re-roofing; although further wood deterioration has likely occurred since. The rainwater gutters and drainage system consists of contemporary aluminum gutters at the roofline and rainwater leaders. The existing drainage system is not original to the building. Non original metal flashing has been installed along the fascias and is in fair condition. The roof structures of buildings 188/190 and 194 are not part of the conservation work.” 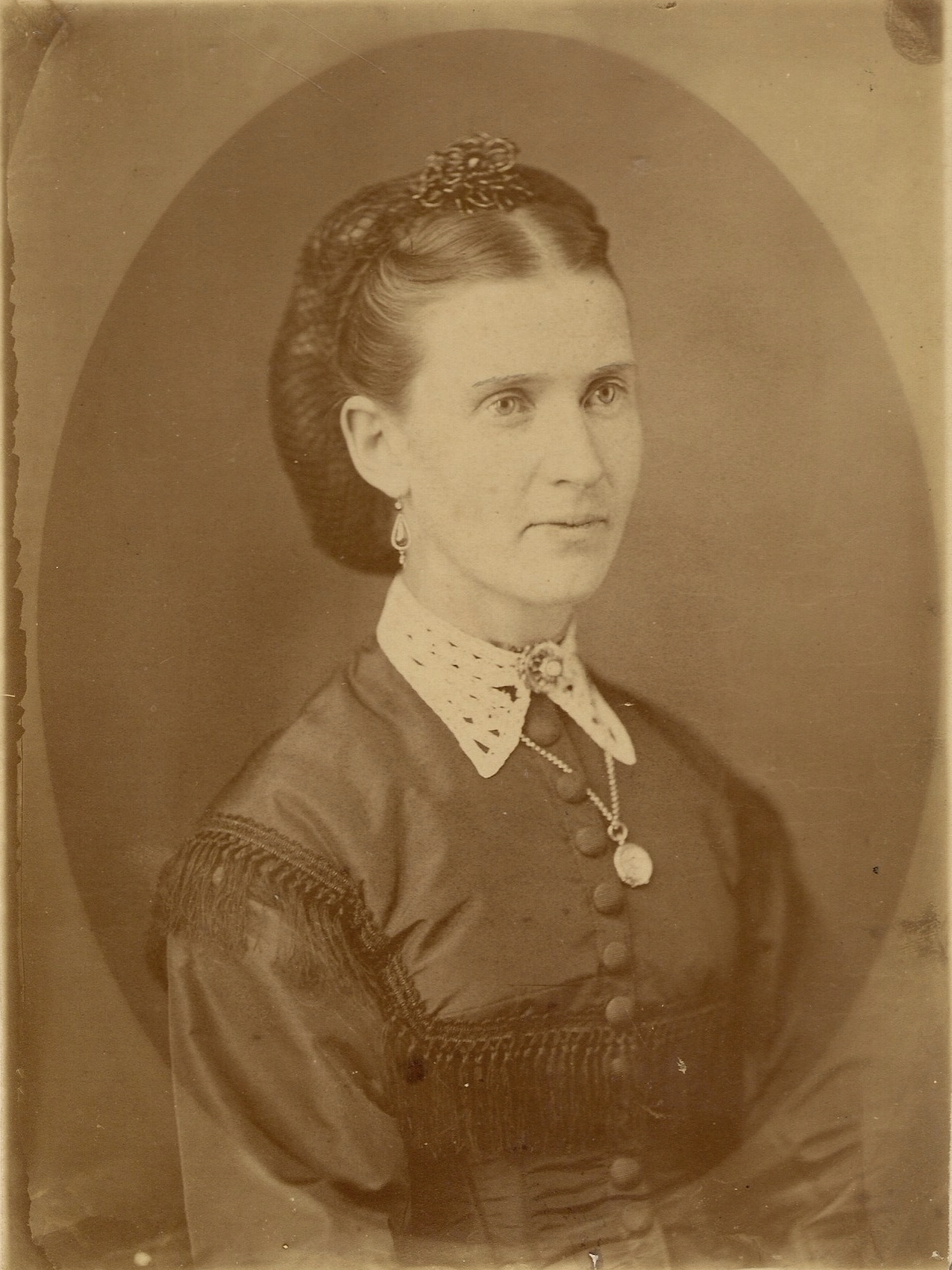 The report cited the action required:

I have no idea what work was done.

Clearly, the circumstances surrounding the removal of the façade will be part of Peter Noehammer’s report which we must all assume will include a detailed chronology showing who had responsibility for what at every stage.

After these latest developments, there is no good reason why an interim report cannot be put before the Council at its next meeting on Monday 11 November 2019.

Note: The Conservation Plan was considered by the Newmarket Heritage Advisory Committee at its meeting in April 2019.

In May 2019 there was a report to the Advisory Committee from the Lower Main Street South Heritage Conservation District Advisory Group (LMSSHCDAG) - whose membership is mainly senior Council staff.

The then Senior Planner (Dave Ruggle)

"advised that an application related to the facade restoration for 184-194 Main St. South has been received. He provided a brief overview of the drawings of the proposal".

Note 2: An 1879 Almanac tells us about the Simpson business as it then was. The photo (right) shows Anne Mary Simpson, the first female pharmacist in Ontario.

"The business of the chemist and druggist is one requiring a vast amount of experience and watchful and constant care for its successful prosecution. The fact that Mrs. Simpson is successfully conducting such an establishment on Main Street Newmarket, speaks in the highest terms for ability and energy of will. The business was established by her husband in 1865 and in 1879 that gentleman passed from this life  and his widow carried on the business having obtained her certificate from the college to continue said business. The premises occupied for the business are quite commodious and are tastefully fitted up and contain a fine stock of fresh and pure drugs and chemicals and toilet articles, propriety medicines of acknowledged merit and standard reputation as well as those articles used by physicians in their practice. She is a native of England and is an ornament to her sex, and a lady highly esteemed by all classes of the community." 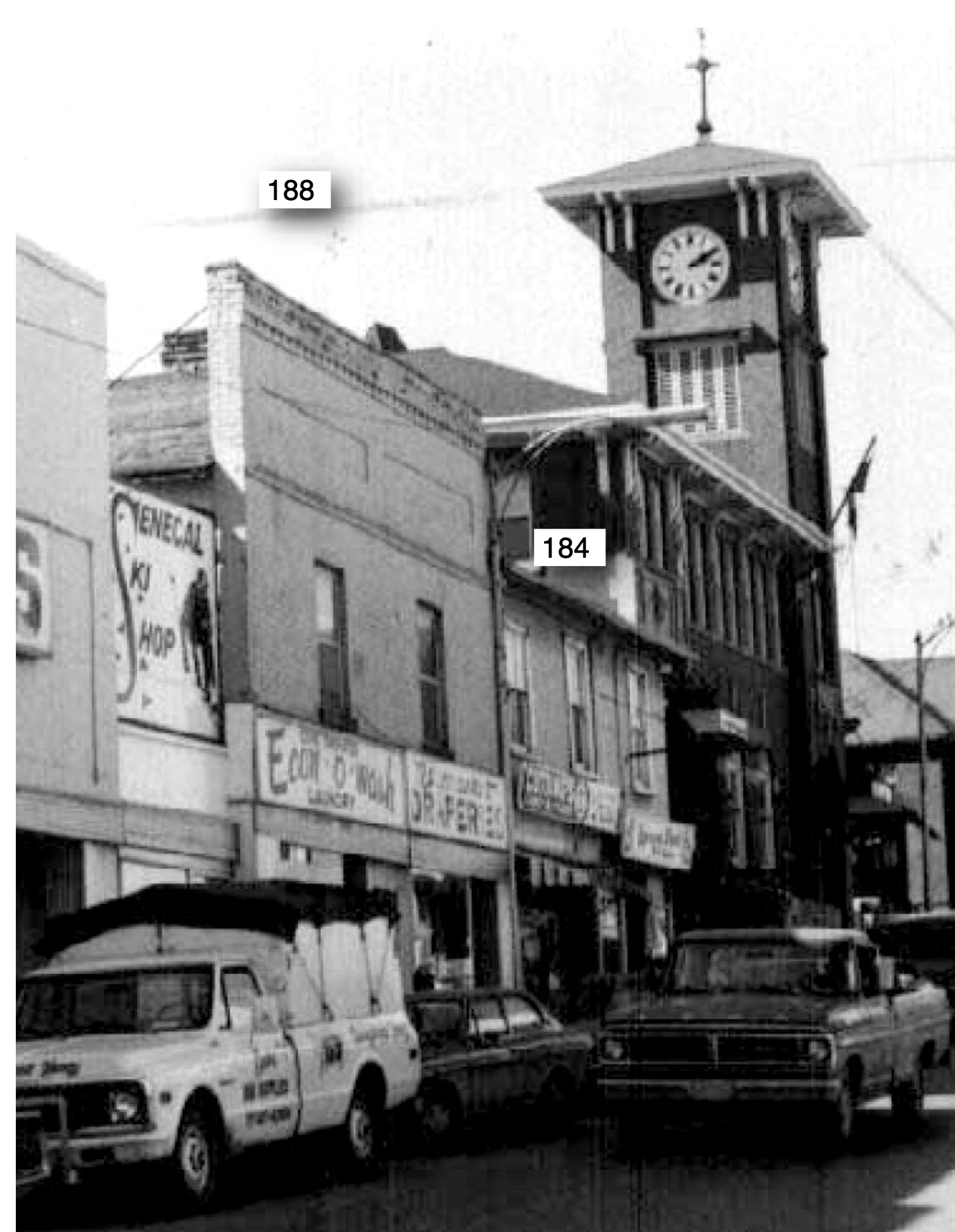 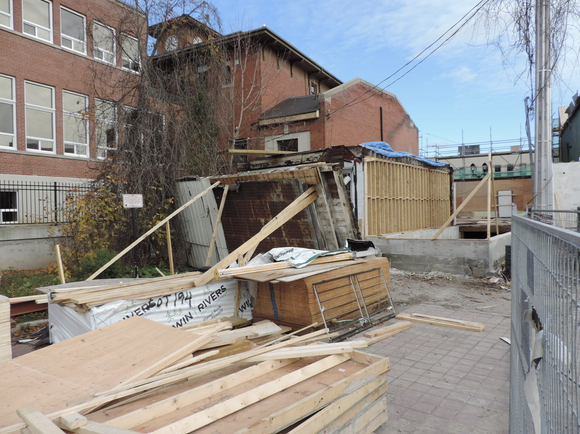 What seems to be left of the facade, propped up by planks at the rear of 184-186 Main Street South. Is this what is being "saved"? Or is there something under the blue tarpauline on the roof of the portacabin? 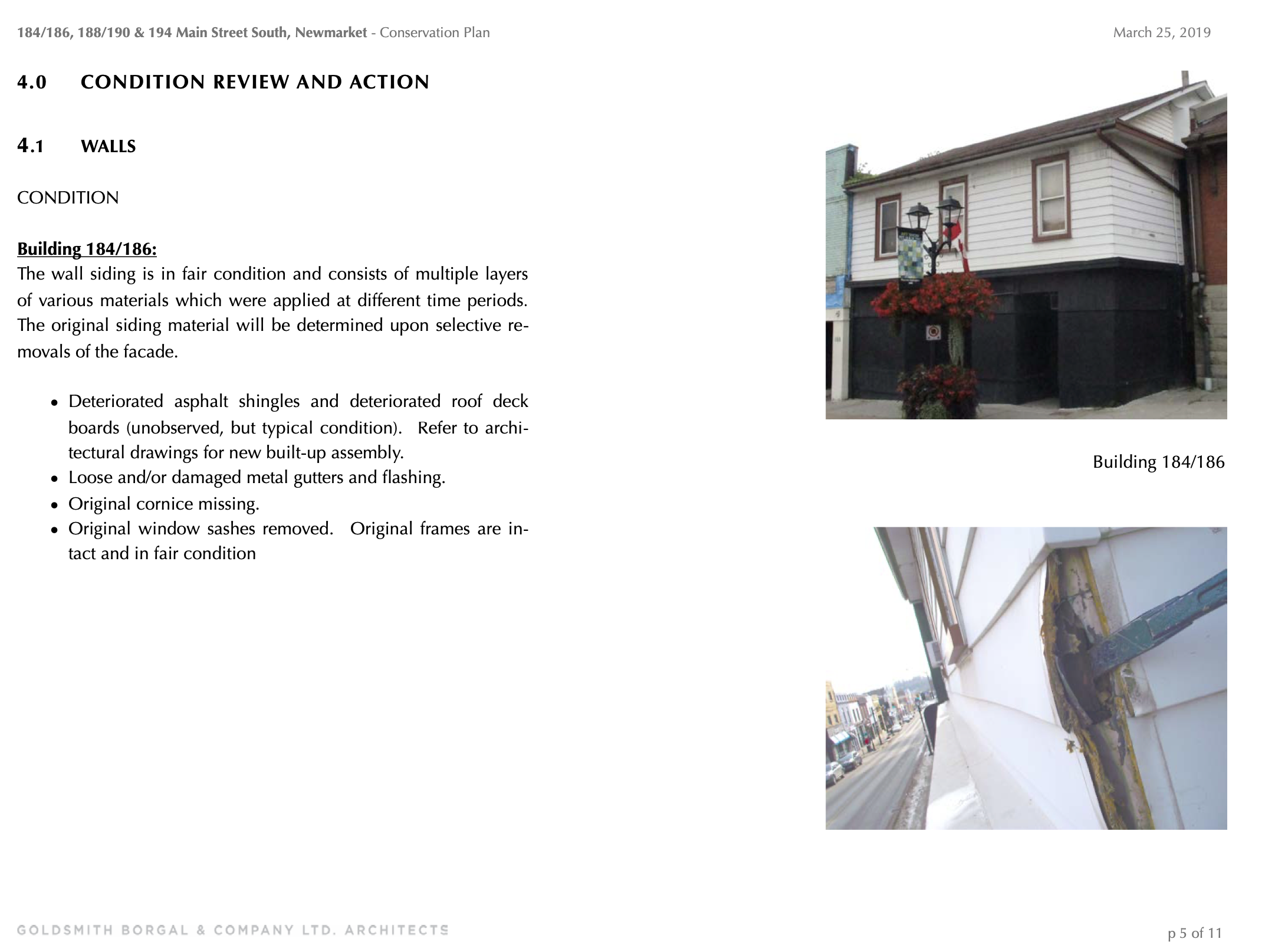