On 3 May 2017, at the first OMB pre-hearing on the Clock Tower appeal, we heard from Bob's lawyer, the ubiquitous Ira Kagan, that there had been a "tacit agreement" between Bob and the Town to facilitate a development in the heart of the old downtown heritage conservation district.

The Town denies such an agreement exists.

Bob is hopping mad. He feels he has been led up the garden path by a duplicitous Town Council and its senior staff, who have been giving him the come-on for years.

Having now raised the issue, it seems to me that Kagan is obliged to explain (a) the nature and form of this tacit agreement, (b) the parties to it and (c) when and where it happened.

Was it sealed with a handshake?

Or a high fives and a big hug?

Was it simply an unspoken "understanding"?

We know it wasn't a nod and a wink.

The Mayor, Tony Van Trappist, has angrily dismissed any suggestion there might have been a "nudge and a wink".

Bob likewise stressed there were no "nudges and winks" and, most certainly, no collusion with councillors.

In any event, this so-called tacit agreement is of some importance. Bob wants to stop the OMB from considering issues that, at least for me, go to the very heart of the matter.

At the OMB pre-hearing Bob withdrew the original application that had been rejected by the Town. It needed Town-owned land which was not going to be forthcoming.

In its place we were given a half baked "Option B" which is planned to be built entirely within the boundaries of the land Bob says he owns. If it is ever built it will have the highest density of any building anywhere in Newmarket.

Unfortunately for Bob, the Town claims ownership of a key parcel of land needed for his Option B to get off the ground. The dispute goes before the Superior Court on 15 November 2017.

But let's put details of that inconvenience to one side for the moment.

Option B's proposed underground parking now goes down an astonishing five levels but Bob has produced no studies showing what impact this huge hole in the ground will have on adjacent structures. I doubt there is another underground parking garage anywhere in Newmarket that goes down to these dark subterranean depths.

Plainly, Option B is substantially different from the original rejected application but Bob wants the OMB to view it as a tweak - a minor variation. Why?

Because if it is held to be "substantially different" the OMB has powers under the Planning Act to dismiss the Appeal in whole or in part.

It was for this reason that the Architectural Conservancy of Ontario included the following in its issues list.*

"Is the proposed development a variation of the original application or is it sufficiently different in its essentials for it to be considered a new application?"

"This issue should be deleted. The change in the development was as a direct result of the Town first permitting some of its lands to be included in the rezoning application but then revoking that permission years later when Town Council turned the development down. Even the Town is not raising this an issue. If it had done so the applicant (Bob Forrest) would have raised the issue of bad faith."

But how can "bad faith" be brought into play when we are given no details whatsoever of the scope and terms of this nebulous "tacit agreement" and what would be captured by it?

It is common knowledge that senior Town staff and councillors have been talking about the Clock Tower development since 2011. The Town allowed Bob to put in an application to redevelop the Clock Tower knowing he would require Town-owned lands.

The Town expressed a willingness to contemplate a land swap if that were to result in a development it could support. I guess the Town was curious to see what Bob would come up with. But, clearly, it never gave him a blank cheque, agreeing to approve whatever development Bob eventually settled on, no matter how gigantic or out-of-place. Such an open ended commitment would, in any event, be open to challenge.

In February last year, the Town's solicitor told me:

"the Council received a land exchange request from the Clock Tower developer but has deferred any final decision on that proposal until such time as the developer's application for zoning by-law amendment goes through the usual public planning process and receives development approval from the Council." 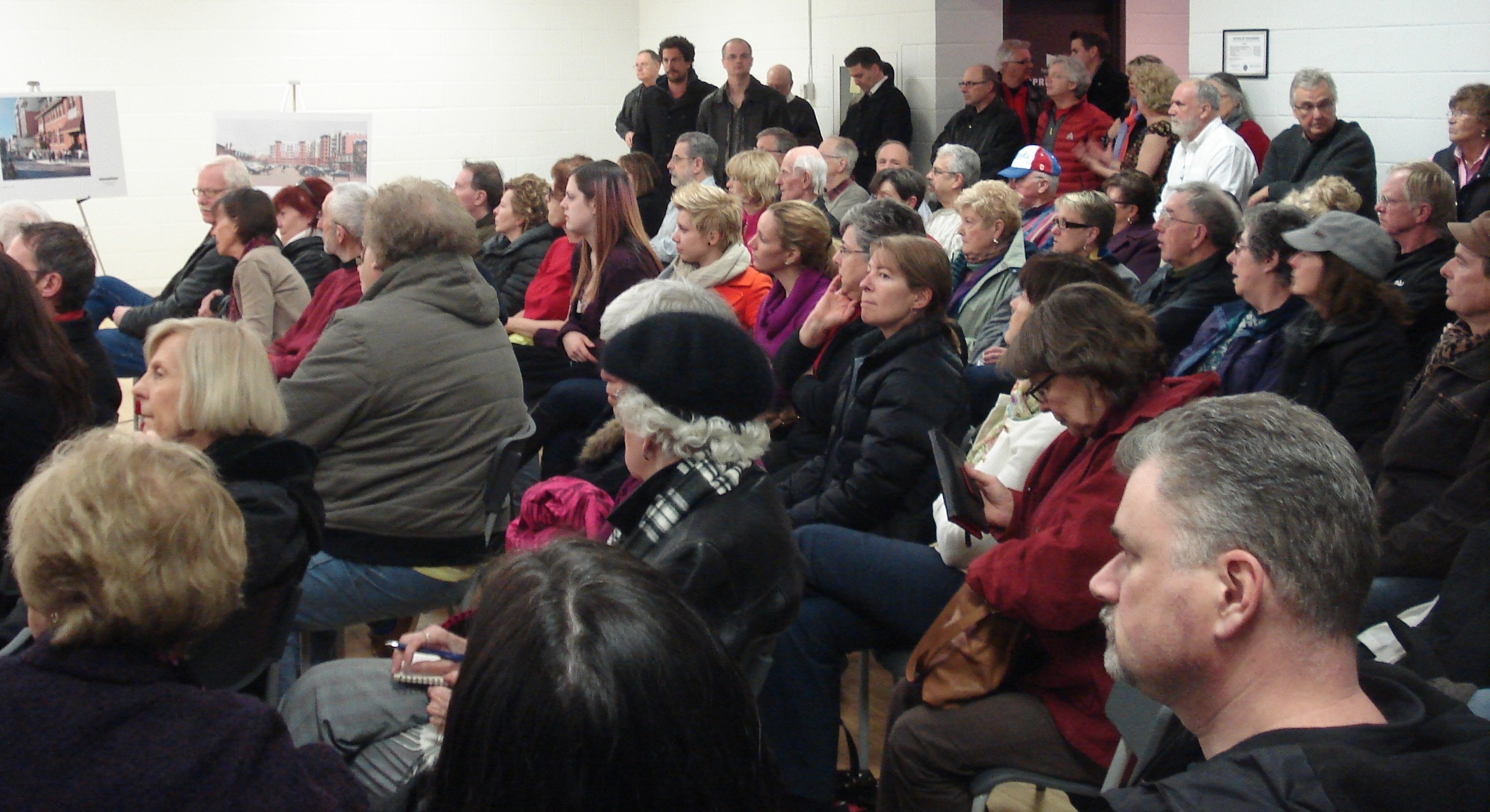 When Kagan alleges bad faith, what precisely is he suggesting? That, four years ago, the Council gave its imprimatur to a land swap allowing a development that was still on the drawing board? (Photo: the packed meeting at the Community Centre, Doug Duncan Drive, on 3 April 2013)

In September 2015, when Bob was still trying to secure financing for the project, he was telling his business partners that the land swap agreement was being drafted and

"when we are happy with it, it will be reviewed by the Mayor and senior staff, then we must go before the Committee of the Whole in camera to seek their blessing on it. We already have their agreement in principle."

This brings us back full circle. If Bob has "their agreement in principle" or a "tacit agreement" let's have all the details before we hear any more nonsense about bad faith.

*The OMB pre-hearing determines the issues raised by the Appeal.