The Clock Tower project could be morphing

Bob’s at it again!

Is there no end to the number of re-designs of the Clock Tower development? How many more expensive makeovers is it going to get before Bob finally throws in the towel?

I asked the Town if Bob’s application - with all its elevations and drawings - had been amended or supplemented in any way since the public meeting was held in the Council Chamber on 9 May 2016.

Apparently Bob has been tweaking again.

I am told there have been “ongoing discussions” with the applicant’s heritage consultants on the massing and density but no formal version can be shared with me or the wider public.

I expected conversations between staff and Bob’s people on the state of the brick facades at 186-194 Main Street South now that the metal sidings have been removed.

But discussions on “massing and density” go a bit beyond what even I was expecting. We have already had six, nine and now seven storeys. We’ve had condo, rental and now condo again.

Could the wily old fox be about to unveil a re-worked version of his seven storey apartment block?

Bob has invested years in this project – and spent barrow loads of money. He is not going to give up until we prise his fingers from the historic properties he is determined to demolish.

Elsewhere…  Information surfaces from Terraprobe - the consulting engineers hired by Bob to examine the state of the ground underneath the Clock Tower and Market Square. Drilling took place in May this year (photo below). Their letter to Bob dated 20 June 2016 tells him they found water 8 feet below the surface at the site. 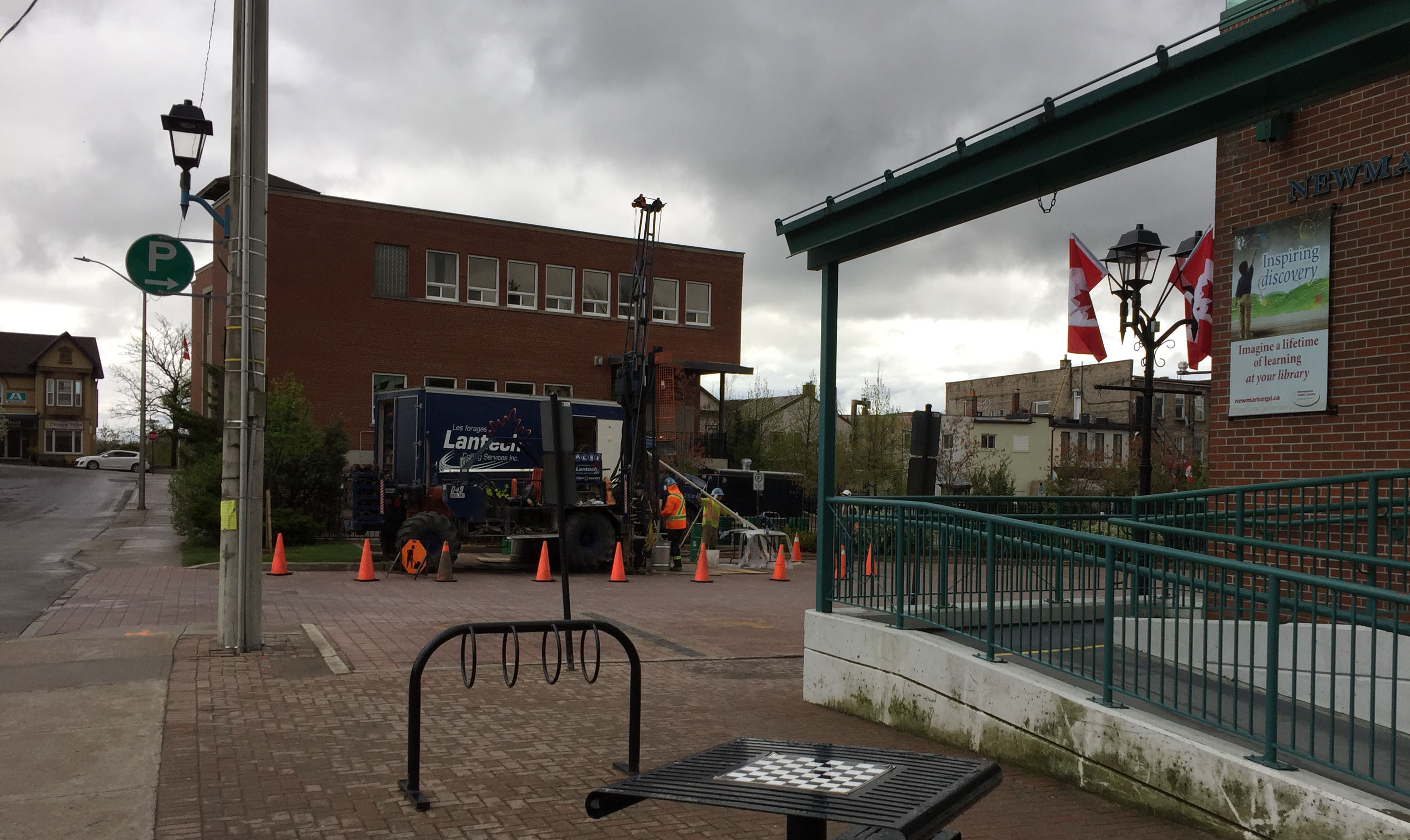 “The proposed development includes three levels of underground parking. In order to construct the structure the local ground water table will have to be temporarily lowered. Based on the depth of the water table, the presence of the dense sands and silt till layer and the use of a concrete cut-off foundation wall for the proposed structure, the amount of dewatering will be relatively minimal. Therefore, the ground water table and its levels will generally remain unaffected by the dewatering activities during construction. The ground water will still continue to flow toward the Holland River which is at a lower elevation.”

“The underground structure of the development (a three level underground car park) will not block the flow of water to the Holland River. Instead, the water will slowly flow around it and under it, like a stream around a rock.”

With inventive engineers and loads of money – and a dose of civic vandalism - I suppose anything is possible.

The June 2016 letter should be read in conjunction with the earlier Terraprobe report of 10 October 2012. This “preliminary geotechnical investigation” report is, of course, out of date.

It envisioned a six storey structure with only two levels of underground parking. Paragraph 5.2 talks of basement floor slab design with crushed stone “compacted by vibration to a dense state”.

I am left wondering what impact this relentless pounding will have on the irreplaceable stained glass windows of Trinity United just across the road.

Paragraph 5.7 estimates Market Square will be excavated down to 8 metres below the surface to accommodate the two level underground parking. I assume they will be going deeper to get a third level.

It will be quite the hole.

If it ever gets dug.

To access the Terraprobe documents open here and scroll to the bottom of the screen and open.