The agenda says a report will be distributed at the meeting.

On Monday, Councillors must not agree a land swap with Bob Forrest.

Notices for the Statutory Public meeting on Forrest’s proposal went up last week after the Committee of the Whole meeting on 18 April 2016. Councillors must have decided the date of the Statutory Meeting (May 9) after agenda item 6 on the Clock Tower had been disposed of and after members of the public had left the building. 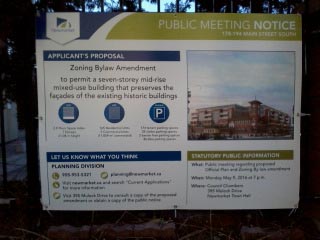 On 18 April 2016, after addressing the Committee of the Whole, I lodged a Freedom of Information request asking for sight of "the agenda and minutes and any supporting papers regarding the land swap at Market Square discussed in closed session on 24 June 2013".

The Town Solicitor told me on 23 February 2016, in response to a request I had made, that:

That seems clear enough to me. On Monday there should be no attempt to agree the land swap until after the Council has considered Forrest’s Clock Tower application. On the other hand, if councillors want to reject the land swap that’s OK by me.

In any event, the details of the proposed land swap should be put into the public domain now that Forrest’s Clock Tower application is being considered by Council.