The Greenbelt land west of Bathurst which lies immediately adjacent to Newmarket was bought in September 2022 for $80M by Green Lane Bathurst GP Inc whose President is Michael Rice.

Less than two months later, on 4 November 2022, the Provincial Government proposed opening the land up for development.

So, what would the land be worth now?

The Rice Greenbelt land covers 687 acres giving a price per acre of $116,448. Less than 2km away, going south on Bathurst lies Chester’s Chicken Farm, whose 16.42 acres are currently on the market for $6,499,000. This works out at $395,797 per acre. Across Bathurst in Newmarket lies the former Marianneville land which was donated to the Town on 14 December 2021 in exchange for a tax receipt which could be used to offset tax otherwise owing to the Canada Revenue Agency.

Here the 15.92 acres were deemed to be worth $14,290,000 which works out at $897,613 per acre. For reasons which I needn’t go into here, I believe this valuation to be completely bogus and wildly inflated. (You can read my letter to the Canada Revenue Agency here in which I call for a new valuation.)

All three lie within - or, in the case of Marianneville, mostly within - the Greenbelt. The donated Marianneville lands are in Newmarket, a settlement area.

Which ever way you cut it, Michael Rice got a very good deal.

The valuation of land is as much an art as a science, especially in the absence of a market (as in the Marianneville case which involved the charitable donation of land in exchange for a tax receipt).

But a sale at Fair Market Value would be the price the property would bring:

“in an open and unrestricted market and between a willing buyer and a willing seller who are knowledgeable, informed, and acting independently of each other.”

It is impossible to believe the person who sold Rice 687 acres for $80M in September would have done so if he had known the land – or a huge chunk of it - would be earmarked for development less than two months later.

And why did Rice buy this huge tract of land when everyone else believed it was Greenbelt in perpetuity and protected from development?

Gambling on a hunch

Was Rice gambling on a hunch that, at some stage, it would become developable? Or was there more to it than that?

In its motion on 7 November 2022, King’s Committee of the Whole said the new landowner was committed to providing lands for the Southlake Regional Health Centre site for a nominal fee. The Mayor, Steve Pellegrini, told the press afterwards he thought this could be $5.

Of course, if Rice were to sell the lands Southlake needs for its new acute hospital for $5 that would be a done deal – a willing buyer and a willing seller. But if Rice were to donate the lands outright he could, cheekily, make the gift conditional on getting a tax receipt from Southlake (a charity) which he could then use to offset tax owing to the Canada Revenue Agency. This is, of course, the infamous Marianneville wheeze. Charitable giving with a payback.

Once we have this information everything else will start slotting in to place. 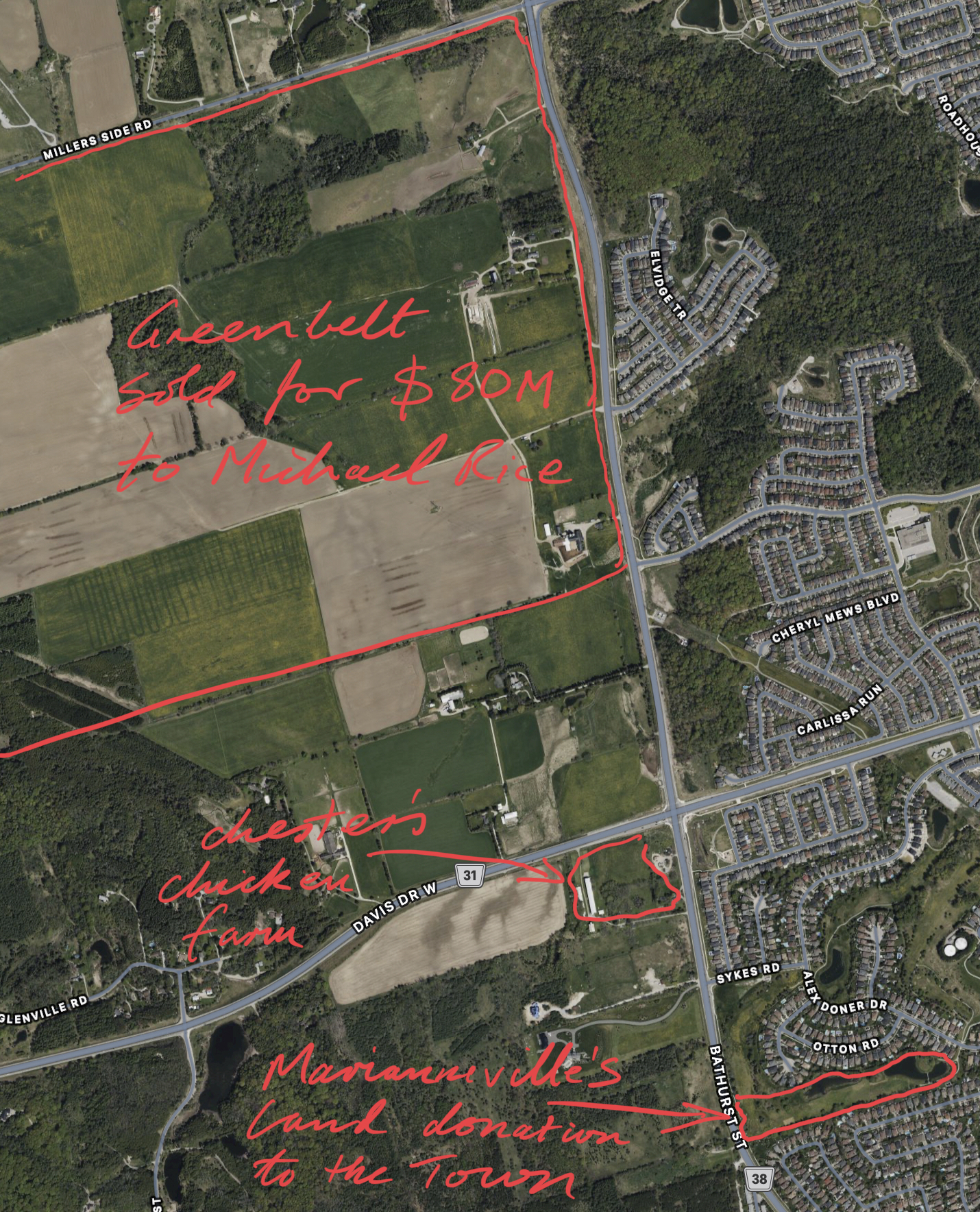