The 2021 Federal Election Result in Newmarket-Aurora

The big story of this unnecessary pandemic election is the collapse in voter turnout.

In the last Federal Election in 2019 the turnout in Newmarket-Aurora was a fraction over 67%, right on the national average.

Yesterday in Newmarket-Aurora the turnout was 56%.

If the national turnout mirrors this, the turnout in yesterday's election will have been the lowest in the nation's history. The previous lowest was 58.8% in October 2008. (The highest was 79.4% in March 1958)

The savage reductions in the number of polling stations - caused by the Covid restrictions - will have played a part.

The preliminary results from Elections Canada on election night show the percentage share of the vote for the Liberals in Newmarket-Aurora barely moved from 2019.

The Conservatives and the NDP both saw increases in their vote share.

The Green vote shrank alarmingly, a verdict on the recent turmoil within the Party.

The People's Party of Canada now moves into fourth place.

But mail-in ballots have yet to be counted. You can check how things are going, here on the Elections Canada site.

Clearly the pundits and commentators do not believe the mail-in ballots are going to change the overall picture.

Nationally, the 2021 Federal Election has produced a picture uncannily like the 2019 result.

The Conservatives won the popular vote (as they did in 2019) but could not translate this into seats won.

This is one of the key characteristics of First Past the Post.

It is not proportional. Doesn't pretend to be.

It is designed to deliver strong, stable Governments - but that can be difficult where there is a multiplicity of Parties.

The Liberals do not have a majority and will have to govern with the consent or acquiescence of other Parties.

We shall see soon enough where this takes us.

Update on 22 September 2021: From CTV - Several Ridings still too Close to Call

And from the Globe and Mail: Voter Turnout near historic lows (Note: G&M bar chart shows 44.6% turnout in 1898 but this was in a referendum on prohibition, not a Federal Election) 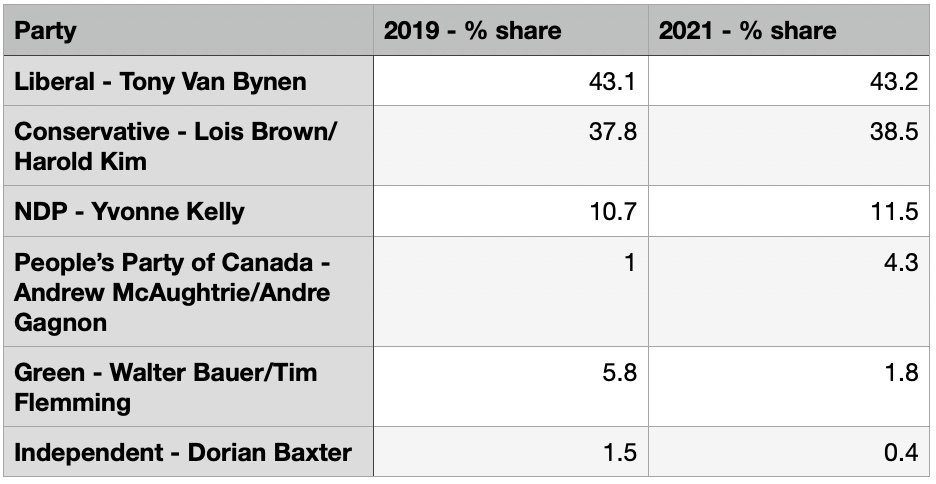