The 2021 Federal Election in Newmarket-Aurora

This is the election no-one seems to want except the Prime Minister, Justin Trudeau. He believes a short, sharp election campaign will deliver the result he craves. A Liberal majority in Parliament. 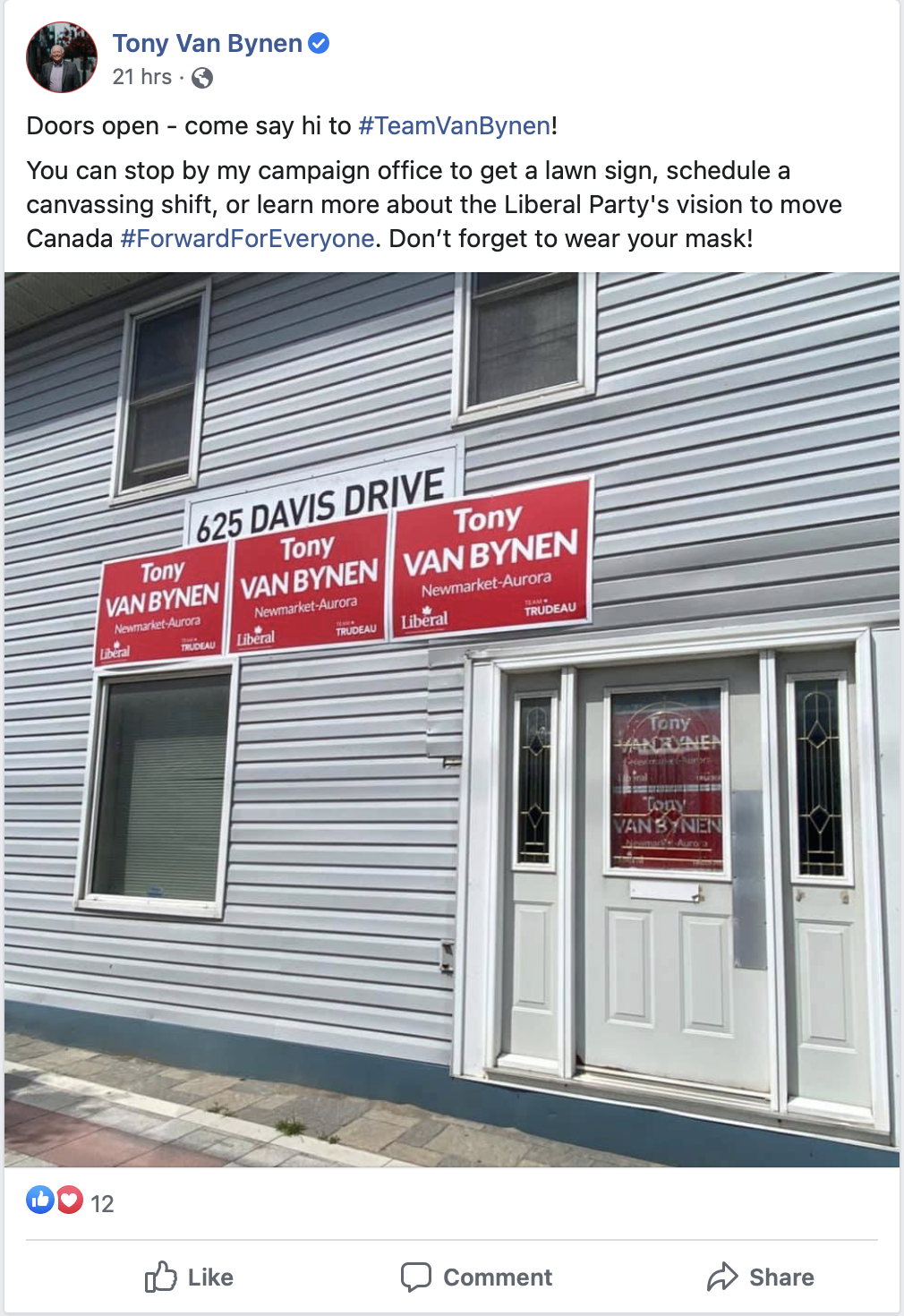 The campaign is designed to be a mad dash to the finishing line.

Polling day is, of course, 20 September 2021 with advance polling on Friday 10 – Monday 13 September. Elections Canada won’t even be publishing the list of confirmed candidates until 1 September 2021.

That said, we know at least some of the people who will be running for election here in Newmarket-Aurora.

Tony Van Bynen, the sitting MP, was out of the trap first, opening his new Campaign Office opposite Southlake Hospital, just a heartbeat after the writ was dropped. Perfect timing. Perfect location. Perfect planning. Or is it?

Van Bynen and the nurses

Van Bynen is a member of the Commons Health Committee but he hasn’t told us if he believes Southlake’s team-based nursing model in the hospital’s Intensive Care Unit is potentially dangerous – as the nurses allege. Now is the opportune time for the nurses to drop in on the great man and get his views.

Van Bynen, the old banker, has secrecy in his DNA. He tells us only what he thinks we should know.

Astonishingly, in 2019 Van Bynen was the only candidate to throw his hat into the ring to fill the vacancy created when the sitting Liberal MP, Kyle Peterson, announced he would not be standing again after only one term in Parliament. Van Bynen saw an opening and immediately joined the Liberal Party and went on to defeat the riding’s former Conservative MP, Lois Brown by 3,236 votes.

Fresh Face for the Conservatives

The Conservatives are fielding Harold Kim, their new standard-bearer who takes over from the veteran Lois Brown who bravely sought the Conservative nomination again but was defeated by Kim, the Deputy Mayor of Aurora.

The NDP candidate is Yvonne Kelly who has been round the track before. She was the Party’s candidate in 2015 and again in 2019. Clearly, she hopes it will be third time lucky.

The embattled Greens have a new candidate, Tim Flemming, who takes over from the excellent Walter Bauer. We shall soon see if the Greens, engulfed in Party infighting, can get through to the voters on their core message, what's happening to our planet.

The People’s Party of Canada has a new candidate, Lana Morgan, who replaces the engagingly innocent Andrew McCaughtrie. In 2019 he told us it was really difficult being on a public platform, trying to give replies to questions which he didn’t always understand.

In the run up to the 2019 Federal Election members of Newmarket-Aurora’s Liberal Party signed his nomination papers to help him reach the required number of supporters to get on the ballot paper. Votes going to the PPC might otherwise have gone to the Conservatives and the Liberals wanted to do everything they could to syphon votes away from Lois Brown. In that, they succeeded.

Liberals not guaranteed a majority

At the moment, the CBC’s poll tracker puts the Liberal Party’s chances of winning a majority of seats in the House of Commons at 51%. (There are no polls specific to the Newmarket-Aurora riding so we must extrapolate from data collected elsewhere.)

But these are early days and public opinion is notoriously fickle.

Focus on the Leader

Elections these days are focussed on the Party leader. Local candidates can make a difference but only at the margins.

If the tide is going out for a political party it will take their candidates, good, bad and indifferent, with it.

In the Ontario Provincial election in 2018, voters had made their minds up they wanted to get rid of Kathleen Wynne even though they weren’t really sold on the PC leader, Doug “Buck-a-Beer" Ford.

The sitting Liberal MPP for Newmarket-Aurora, Chris Ballard, widely regarded as competent and a safe pair of hands, was swept out to sea with all the rest, coming in third behind the NDP.

Updated on 25 August 2021 with profile of Tim Flemming from Newmarket Today.

Updated on 31 August 2021: From Newmarket Today: On the Campaign Trail

Updated on 21 September 2021: The Election Result in Newmarket-Aurora

Updated on 23 September 2021: Will the mail-in ballots change the provisional result of the Federal Election in Newmarket-Aurora? 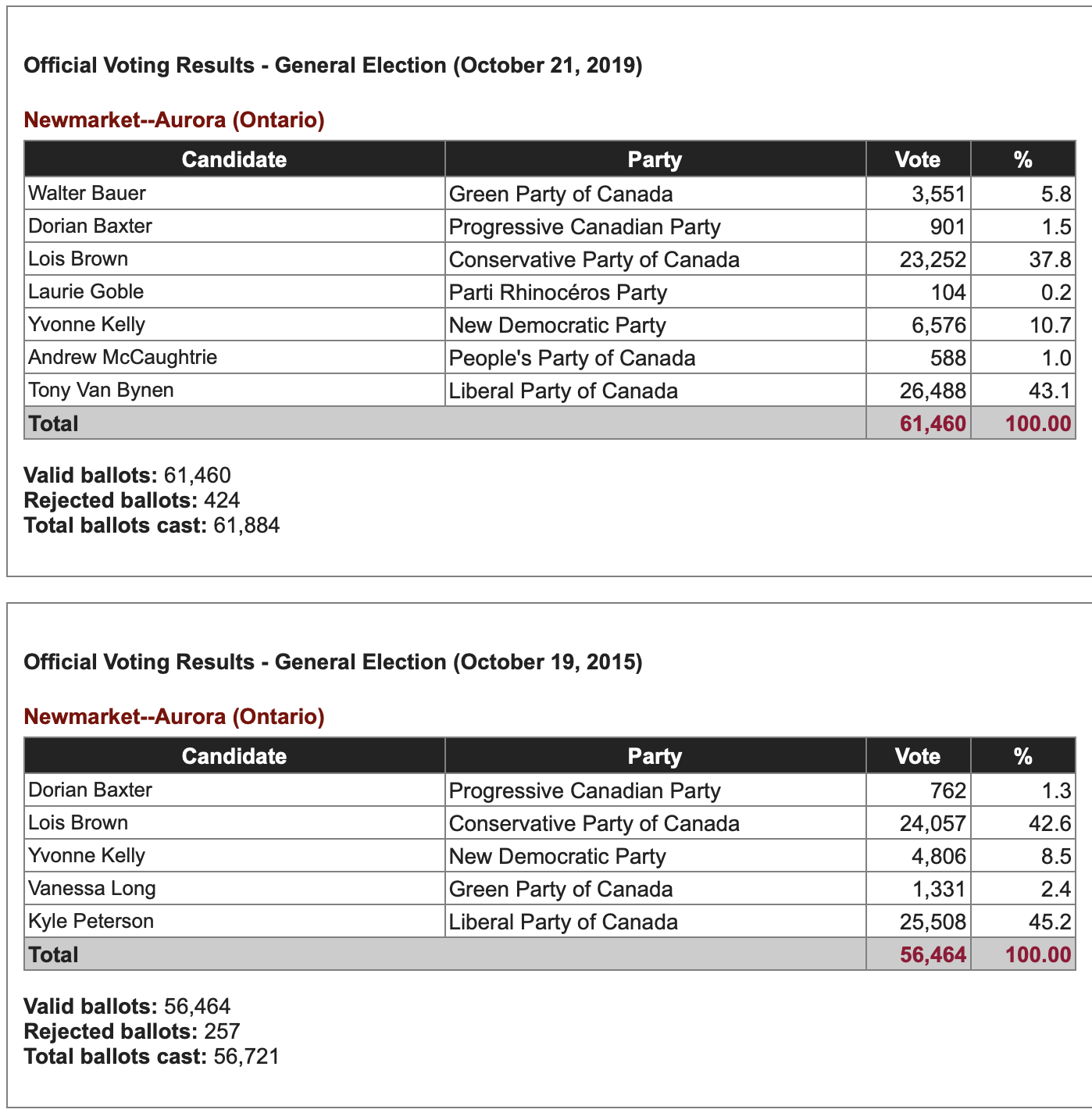