Canada is warming twice as fast as the global average. And in the Canadian North it's three times.

Should we be worried?

I suppose Canadians will sit up and take notice once the permafrost turns squelchy and roads buckle and houses lean over at crazy angles.

But, until then, how do we grab their attention?

Walter Bauer sent me his latest research on Canada’s Greenhouse Gas Emissions (GHG) which got me thinking. Walter reviewed Canada’s two climate plans and the budget (links highlighted below) to see if GHG emissions were likely to reduce to anything near the Paris Agreement which, he admits, is a low bar.

By 2019 Canada’s GHG emissions had gone up to 730 mega-tonnes per year (Mt/year).  I find it difficult to visualise this so I ask Walter for help. He tells me:

Our World in Data is a very useful interactive website which allows you to rank Canada alongside any other country you care to mention. You can rank emissions per capita and in all sorts of other ways. (see graphic at the bottom)

“sixty measures in the Pan-Canadian framework and an additional sixty-four in the Strengthened Climate Plan”.

Through two climate plans and budget, the Liberals have introduced measures to counter Climate Change.  This analysis subjectively divides the Liberal measures into four primary categories.

The focus of this review is any measure targeting a reduction in GHG emissions (green).  Blue includes initiatives such as revised building codes or establishing standards.  Grey includes Adaptation and Mitigation, Research & Development or vague commitments.

There were only eleven key measures (not 60) to reduce GHG emissions: $7.4 billion/year for 11 years.

If the Pan-Canadian Framework had been effective, by 2019, Canada should have reduced its emissions to approximately 660 Mt/year (assumes linear reduction.)  Instead, Canada’s emissions have gone up to 730 Mt/year.  Apparently, Canada is the only member of the G-7 nations where emissions increased from 2015-2019.  Emissions rose because key Liberal measures had no effect on:

“2019 will be the last year Canada’s greenhouse gas emissions go up . . . We will see year-on-year reductions — absolute reductions — starting in 2020, through to 2030. We have high confidence that’s actually going to be the case.”

Despite the failures of the Pan-Canadian Framework, Canada increased its reduction target with its new climate plan.

2020 (reported in 2022) and 2021 emissions will show a decrease in GHG emissions but that is largely due to recessionary pressures created by the pandemic.

Despite negligible GHG reductions to date and grim projections Trudeau announced on 22 April 2021 that Canada will reduce emissions to 40-45% below 2005 levels.

Visit Our World in Data here. 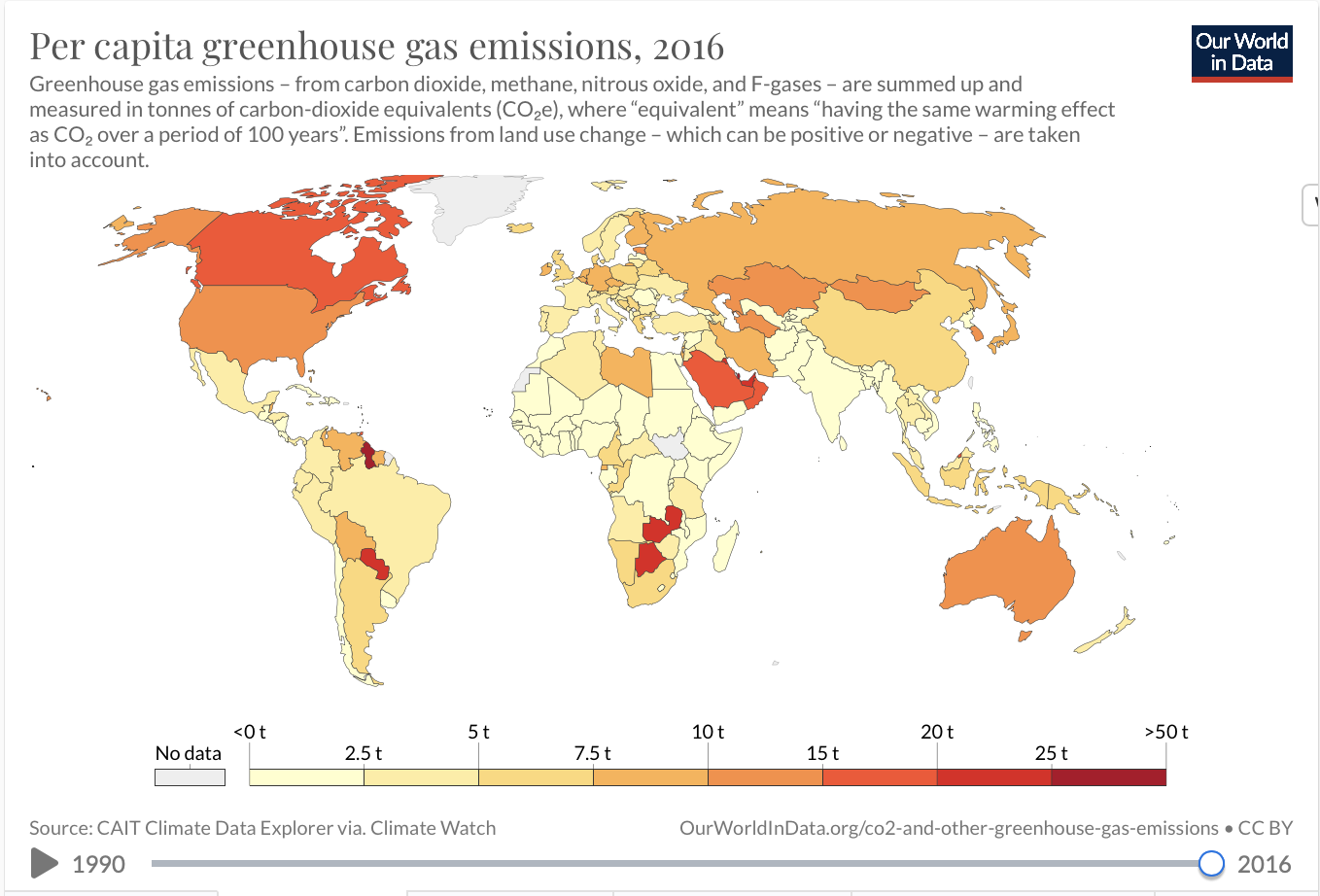