Does the President of the United States sport a fake tan? 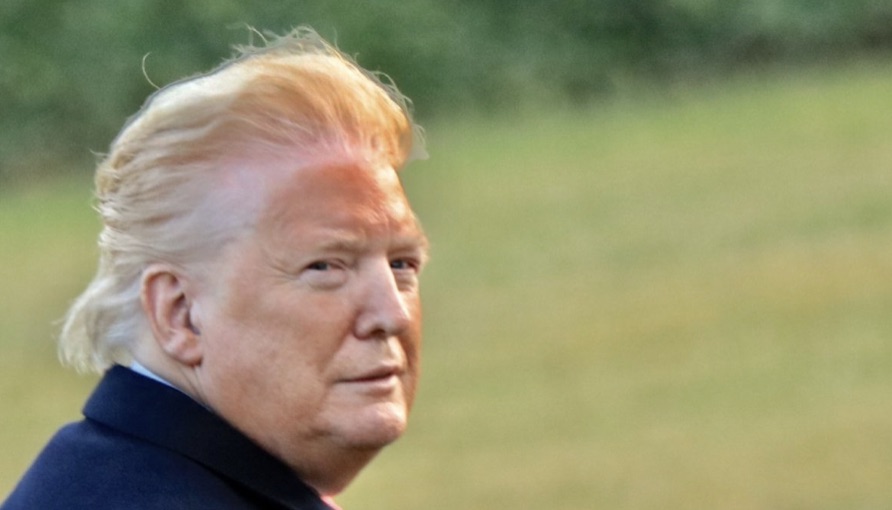 This photograph, taken on the South Lawn of the White House, went viral on 7 February 2020. It shows the familiar orange face but this time ringed with white.

The image upset the great man:

“More Fake News. This was photoshopped, obviously, but the wind was strong and the hair looks good? Anything to demean!”

It doesn’t bother me in the slightest if the President wants to wear make-up. But it worries me a great deal if he doesn’t know the significance of Pearl Harbor.

“Trump had heard the phrase ‘Pearl Harbor’ and appeared to understand that he was visiting the scene of a historic battle, but he did not seem to know much else."

In 2017 Trump visited Pearl Harbor on a private tour of the USS Arizona Memorial which commemorates the lives lost in the Japanese attack on the US Pacific naval base. We are told Trump turned to his then Chief of Staff, General John Kelly, and asked:

Dunkirk. Something happened here, didn't it?

It is bit like a British Prime Minister visiting Dunkirk and asking his Private Secretary to explain the significance of what happened there.

It gets me thinking… Does Trump have any understanding of the Korean War and how the country came to be divided? When he sups with Kim Jung Un doesn’t he realise he needs a very long spoon? Is the love affair still hot or is it cooling?

We know Trump doesn’t read the briefing papers prepared for him but his jaw-dropping ignorance of basic facts about the history of his own country is deeply troubling.

We must all pray the Trump Presidency will soon be over.

It is often forgotten that Trump is uniquely unpopular. More people disapprove of Trump than approve. It’s been like that all through his tempestuous Presidency. But, despite this, there is a sophisticated disinformation campaign to get him re-elected.

He received almost three million fewer votes than Hillary Clinton (who had her own issues) but won the flawed Electoral College by 304 to 227 votes.

George W. Bush won the Presidency despite Al Gore winning a majority of the popular vote.

Trump could be saved by the Electoral College again.

A New York Times editorial last August said it was time to fix the Electoral College or scrap it:

“What really disregards the will of the people is the winner-take-all rule currently used by every state but Maine and Nebraska. Giving all electors to the winner of the statewide popular vote erases the votes of citizens in the political minority — say, the 4.5 million people who voted for Donald Trump in California, or the 3.9 millionwho voted for Hillary Clinton in Texas. Nationwide, this was the fate of 55 million people in 2016, or 42 percent of the country’s electorate…”

Each State alone decides how it chooses those who will vote in the Electoral College.

“Or they could award them to the candidate who wins the most votes nationwide, regardless of the state outcome. That’s the elegant approach of the National Popular Vote interstate compact, which achieves a popular vote not by abolishing the College but by using it as the framers designed it — as a state-based institution. So far 15 states and the District of Columbia, with 196 electoral votes among them, have joined the compact, promising to award their electors to the national vote-winner. The compact goes into effect once it is joined by states representing (a total of) 270 electoral votes — the bare majority needed to become president — thus guaranteeing the White House to the candidate who won the most votes.”

If Trump loses the popular vote by millions – just like last time – but wins in the Electoral College his election will lack legitimacy but he won’t see it that way.

And losers are just losers.