Can the Town’s oldest tree survive when over one third of its root system is paved over with impermeable asphalt?

In 2005 the Town designated the White Oak Tree in Botsford Street as being of historic value. Remarkably, this designation did not come with any kind of protection, the Town believing the old oak tree could look after itself.

The tree is certainly a survivor. It has been there on Botsford Street in the heart of the old downtown for more than 200 years. The Liberty Oak was standing when Lieutenant Governor John Graves Simcoe was making his indelible mark on Ontario. (Photo: right)

In May this year the owner of a neighbouring property at 443 Timothy Street paved over his yard right up to the boundary fence, inches away from the old tree. He wanted to provide parking for his apartment building, not realising that this would dramatically reduce the moisture and nutrients absorbed by the old oak tree.

And that’s where things currently stand. Everyone expresses concern but what exactly has happened after five months?

To be fair, the Town has ensured the tree has been sporadically watered and fertilised but the impenetrable asphalt carapace is still there, smothering the roots.

If I were Master of the Universe I would invoke emergency powers and dig up the paving. I’d put down honeycombed mats to allow rain and nutrients to permeate the soil while still allowing parking.

The Town’s Zoning By-law 2010 stipulates there should be a 3 metre plant and vegetation buffer zone around the boundary of an apartment building with a R5 zoning designation – just like the one at 443 Timothy Street. However, this cordon sanitaire perversely does not apply in this case – just when it is most needed.

I am told it is all about “legal nonconformity”.

443 Timothy Street was consumed by fire on 28 November 2012. What was left of the structure was demolished on 26 August 2013. Work started on the plot in 2015. The ground was excavated with heavy machinery and then levelled. By December 2015 the new building was being framed and, by the turn of the year, it had a roof. As I say, the land at the boundary line which had previously been porous was paved over in May 2019.

The Town says the owner of the apartment building can pave over his land – despite the most recent Zoning By-law - because of “grandfathering” rights. This allows the owner to use the parking area without the required 3 metre buffer if the yard had previously been used as a parking area in a way that would not be permitted now. 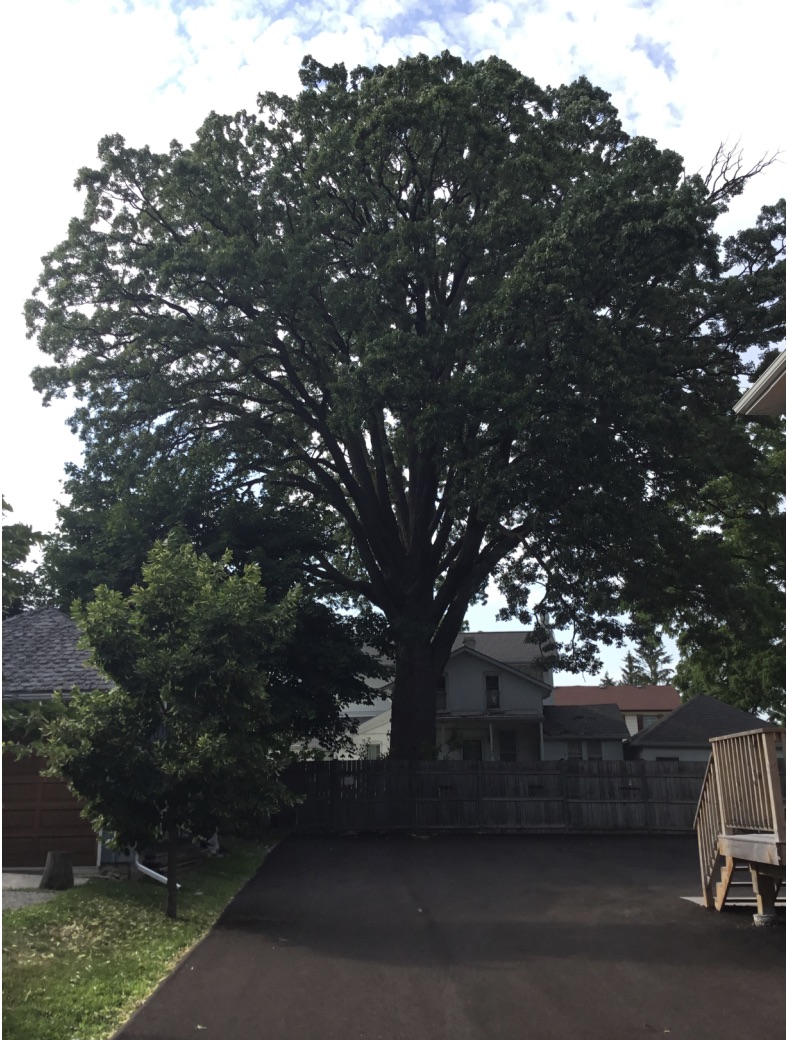 In short, it doesn’t conform with the Zoning By-law – but it’s legal nevertheless because of its previous use. Hence the term “grandfathering”.

Everyone sees the problem. And by all accounts everyone wants to do something to help the old oak tree but the people with the power to do something about it are wringing their hands. We seem to be stuck in a weird kind of bureaucratic stasis where nothing significant is happening.

The Town says the paving of the yard is a private matter between the two neighbours – the one with the designated tree on her land and the apartment owner who paved right up to the boundary line.

Clearly, this is a matter for the lawyers. But I am left wondering if grandfathering rights could be lost if there is a delay in rebuilding a structure lost to fire? In this case, it was over three years for the new replacement building to be erected.

Would the new Zoning By-law with its 3 metre buffer be disapplied after five, ten or even 20 years? I have no idea.

It doesn’t know it is designated because of its unique historic value.

It isn’t bewildered – as I am – that so little is being done to ensure its survival.

And when the old oak tree is dead and gone we shall all agree it was a terrible thing that should never have been allowed to happen.

Update at 17.15 on Tuesday 29 October 2019: The Mayor, John Taylor, this afternoon confirmed that the Town had reached an agreement with the owner of 443 Timothy Street. I am told the paving in the yard is to be removed and will be replaced with pervious pavers. This work is scheduled to be done in the next month or so. The Mayor describes the tree as “incredibly important” and says he shares everyone’s concern. It is terrific news that things are moving.