Another historic building at risk on Main Street 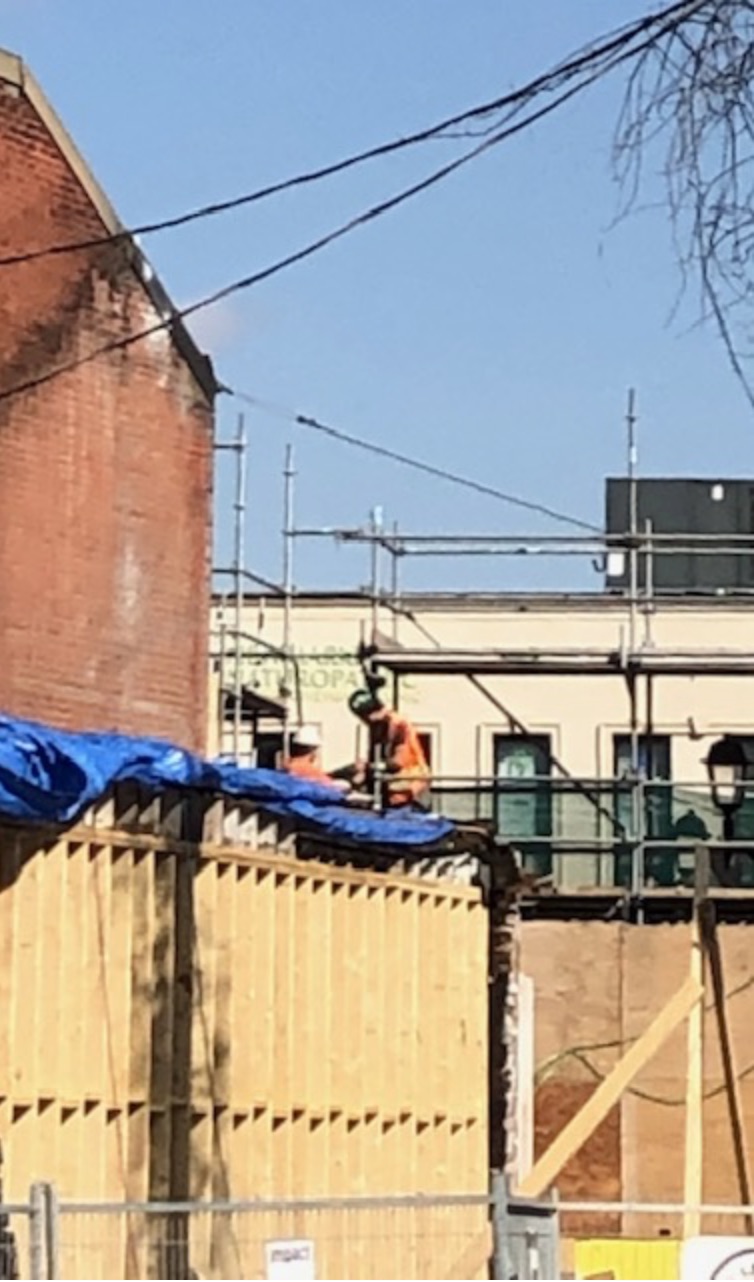 News reaches me that workers are seen on the building site on Main – despite the Stop Work Order that was slapped on the work following the unlawful demolition of 184-186 Main Street South on the evening of 9-10 October 2019.

He says the Site Supervisor is about.

I wander round the block and see a man in a white hard hat and another guy in day-glo construction gear.

I introduce myself and discover I am talking to Jim, the site supervisor, from Prime Design Build. He wasn’t around last week but he tells me the scaffolding was secured before the building was knocked down.

He hopes the Stop Work Order can be lifted in a couple of days.

Predictably, I am told there was a safety issue. The man in the day-glo is Jacques Carrier from CFCW Construction Inc. He tells me the building had to come down because it was unsafe. And he had 10 people on site. He says the old building was being held up by the Clock Tower.

It is still unclear who authorised the demolition.

Now Mr Carrier is telling me that the building next door to the demolished one is also unsafe. (This is the building painted light blue in the photo right.) I ask him to explain.

He says the front wall is just sitting on earth. I ask if there is a rubble stone foundation but the answer is unclear.

As I am talking to the Site Supervisor and the construction man, Craig arrives.

Craig is wearing a jacket with a Newmarket logo. He says he has to check if he gets reports of anyone on site. Jim tells him he has been in 194 Main Street South but no work was going on. 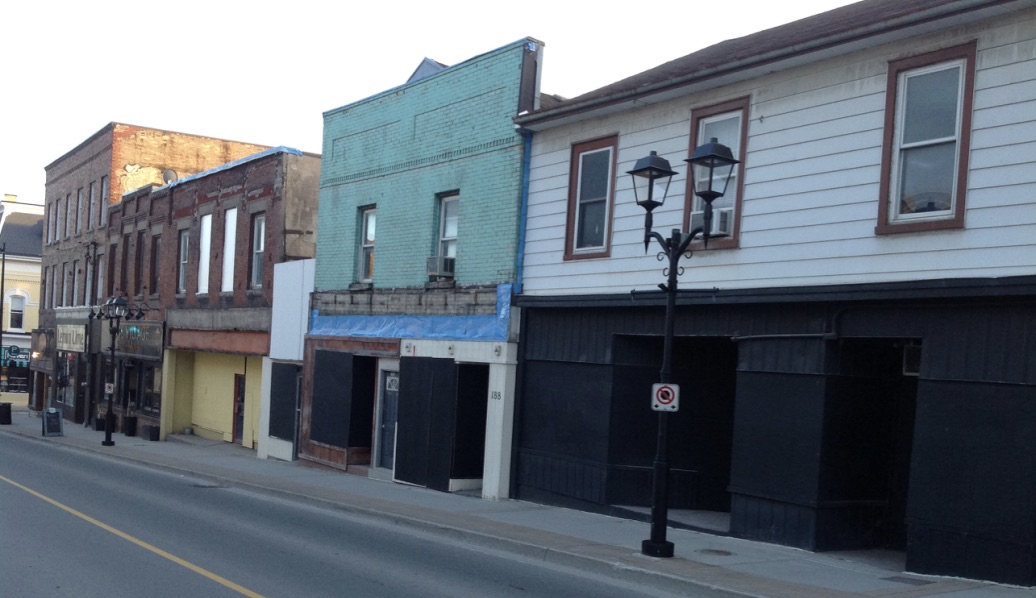 Is the historic commercial building adjacent to the one that was demolished unsafe as Mr Carrier alleges?

Are any of the remaining buildings at risk of collapse?

How on earth did it come to this? We urgently need answers.

Moments ago the Mayor tells me that the only people on site are structural engineers and scaffolding staff and both are allowed on site to check on the current status of the buildings and to ensure the buildings are safe.

"Nothing is being done that contravenes the Stop Work Order".

But let's be honest. What we have witnessed is a classic case of demolition by neglect.

Rotting buildings left empty and neglected for years while our naïve and trusting Municipality chooses to believe that the owner, Bob Forrest, will do the right thing.

There was never any chance of that happening.

"A little bit of an unfortunate situation"

Councillor Bob Kwapis: Thank you Mr Mayor. We had a little bit of an unfortunate situation just before the long weekend on Main Street during the construction within the Clock Tower developements. And (I) just wanted to ask staff if the developer in any way received any kind of demolition permit or any indication that that one house would be levelled.

Chief Administrative Officer Jag Sharma: Through you Mayor Taylor.  I am working with Commissioner Noehammer. No there was no demolition permit issued for that property and what we can say is that we are investigating and that there have been Stop Work orders; orders to conform put in place so two of the properties have a Stop Work order and one has an order of conformity applied to it - essentially a Stop Work order and we continue to investigate and we will provide more details when we can.

Bob Kwapis: Do we have any kind of timeline about when some of the details might be coming up throughout this investigation that we are doing?

Chief Administrative Officer Jag Sharma: I don't know that I could give you a specific timeline at this point in time. What I can say is that we are actively investigating at this point.

Bob Kwapis: Thank you. I look forward to the findings.

Update at 23.00 on 16 October 2019: The Mayor, John Taylor, is giving a lecture this evening to the Newmarket Historical Society on the purchase by the Town of Mulock Farm - the former home of Sir William Mulock. He gets a question afterwards on the unlawful demolition of 184-186 Main Street South. He tells us he is upset. The investigation into the circumstances surrounding the demolition could take two weeks. He says the Town did not issue a permit authorizing the demolition of the protected historic building. The issue goes beyond Newmarket. If rules and regulations are ignored by developers who demolish and then try to justify their actions after the deed is done then we have problems. (My words not his.)