The Liberals and Electoral Reform

For the Liberal Party, the Federal Election on 20 September 2021 was a damp squib.

True, they have the most seats in the House of Commons but that is a quirk of our First Past the Post electoral system which rewards Parties whose support is geographically concentrated rather than thinly spread across the nation. 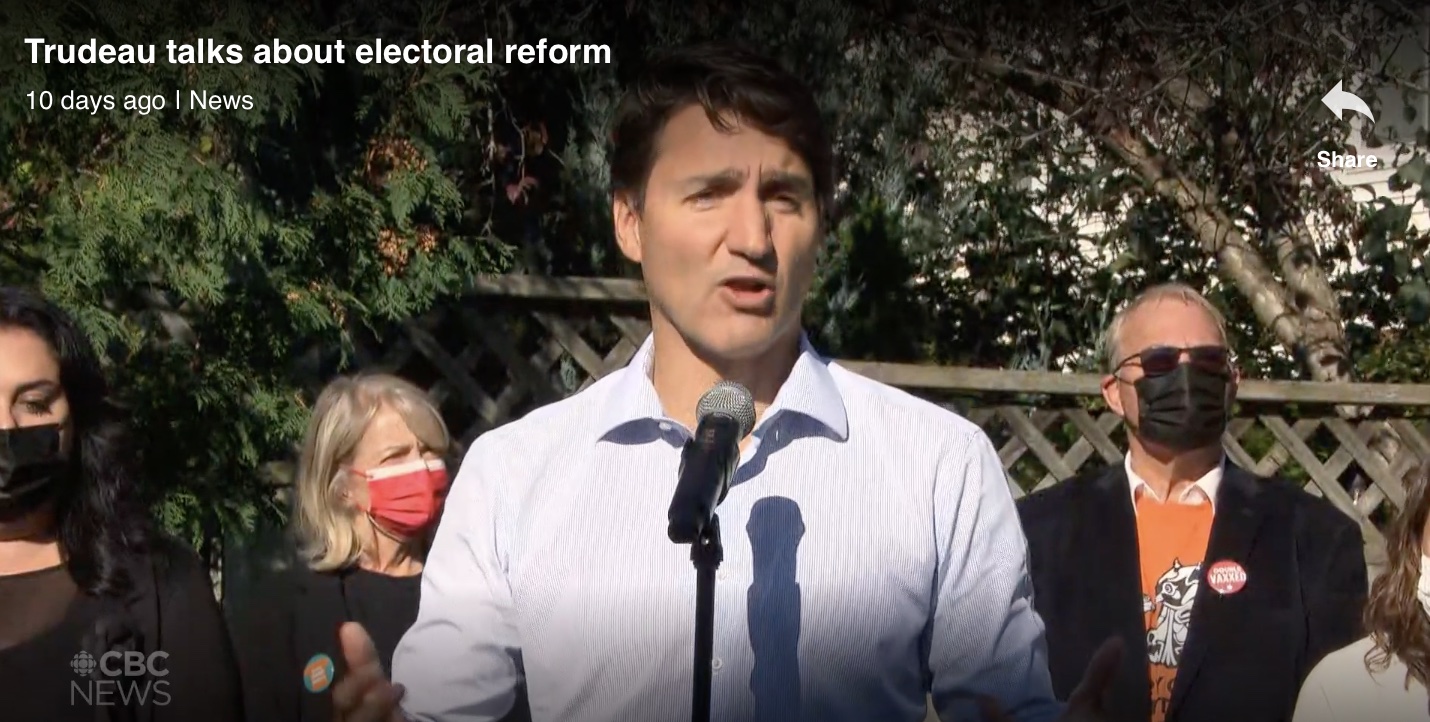 The Globe and Mail’s Andrew Coyne puts it this way:

“… for the second election in a row, the winning Liberals obtained fewer votes than the party they defeated. With 32.5 per cent of the vote at time of writing, the Liberals have the weakest mandate of any government in our history, breaking the record set … in 2019.

The Liberals did not just lose to the Conservatives in the popular vote the past two elections: they have done so in five of the past six.”

He could have added that the People's Party of Canada got 842,969 votes (5% of the national total) and doesn't have a single MP.

Coyne says we are trying to run six-party politics on a system built for two, and it’s not working.

When the Prime Minister visited Aurora during the election campaign (18 September 2021) he was asked about electoral reform.

In the 2015 Federal Election he made a commitment to replace first-past-the-post but didn't follow through. (See below: from the Liberal Platform 2015).

Bold as brass, Trudeau tells reporters he remains open to getting rid of first-past-the-post - providing it is not proportional representation (PR) and only if there is a "consensus" on the issue.

How that consensus would be measured is unclear.

He makes no mention of a democratic deficit which allows a single party Government to be formed (not a coalition) with the support of less than one third of those who voted.

He rejects PR because it gives more weight to smaller parties. His preference is for the ranked ballot - no doubt on the grounds that most NDP voters would put Liberals as their second choice rather than Conservatives.

"This is something that we approached years ago. There was no consensus. If ever there is more of a consensus, it could be interesting to follow up on, and I'd be open to that, 'cause I've never flinched in my desire for ranked ballots...

"But that's not the priority, and this is the first time in 36 days that anyone has asked me about about electoral reform."

It seems to me the chances of electoral reform being resurrected as an issue in the new Parliament are close to zero.

If we had a different electoral system - and more political parties - the way we do our politics would change.

"Big tent" political parties would still exist but, over time, they would likely shrink and fragment.

The US Congresswoman, Alexandria Ocasio Cortez, talks about the straightjacket of America's two-party system:

“In any other country, Joe Biden and I would not be in the same party, but in America, we are.”

In the United States, with its ossified institutions, it is impossible to imagine three or four or five functioning political parties.

Almost as difficult as imagining Canada with proportional representation.

Note 1: With the Ranked Ballot voters list their preferred candidates - 1st, 2nd, 3rd and so on.  If no candidate gets 50% of the vote the one with the fewest votes is eliminated and their supporters' second choices are distributed to those still in the race. This continues until one candidate achieves  a majority.

“I for one believe that we should also always take a look at improvements in any system or any process and I do think that is something we should look at. I'm not sure that proportional representation is the only solution.

I don't know what got in the way of looking at that since I wasn't in the House at the time. I think we should be looking at reviewing it but we should be doing it in consultation, consulting with our communities and broadly looking at the options that are available so, yes, every organization, every society, should take a look and see if there are better ways to accomplish the representation that we need so that their government looks like the people it represents.

I think that's an important commitment on behalf of our Party and I think that will be done. As to when that can be accomplished I think we have a number of very critical priorities ahead of us immediately. We need to get on top of the pandemic and we need to make sure that we get back into an economic environment where people feel safe; have a place to call home…I think we should look at it.”

The Greens favour proportional representation. The Conservatives are not in favour of electoral reform.

The CBC reminds us that two Provincial referendums on electoral reform have been held since the Liberals abandoned their 2015 pledge to get rid of First-Past-the-Post in Federal Elections. In December 2018, British Columbians voted against PR by 61% to 39%. In 2019 Prince Edward Island rejected PR by 52% to 48%.

In 2007 a referendum in Ontario rejected rejected mixed member PR for the Provincial Parliament.

Below: from the Liberal Party 2015 Federal Election Platform:

Update on 16 October 2021: From the Toronto Star: Provincial Liberal Leader Steven Del Duca says he will bring in the ranked ballot or quit.

Update on 21 October 2021: Opinion from the Toronto Star: Steven Del Duca's foolish promise to reform the electoral system or resign.